Perhaps A ‘70s Redux Is Our Best Hope 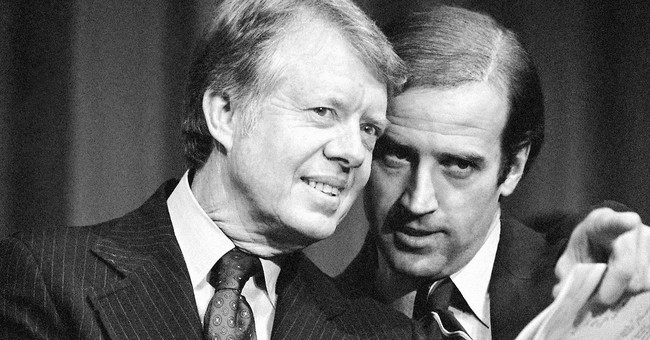 Things really are starting to look grim. Not too long ago, we had worried that the “Biden” Administration would be a Carter reprise.

Now we can only hope.

The obvious sign that we’re returning to the age of bellbottoms and quaaludes is the inflation rate. It’s high: 6.2 percent annualized in the last reading, and rising. And we can expect that rate to continue rising, because of all the underlying, worse-than-the-‘70s decisions that this administration is making.

The ‘70s inflation had several parents, including Nixon’s both closing the gold window (untethering the dollar from any objective standard at all) and then talking the malleable Arthur Burns into keeping interest rates stagflation-generatingly low just as energy prices were leaping in response to exogenous shocks.

But by the end of the 1970s Jimmy Carter had brought in Paul Volcker, who recognized that the Fed’s response to high inflation must be high interest rates, a policy that became successful once Ronald Reagan’s tax cuts provided the economy the supply-side impetus it needed to start growing despite those high rates, thus crushing inflation in the strong and caring arms of rising productivity.

In contrast, consider that while Joe Biden has renominated the immensely pliable and accommodative Jerome Powell, he has now backstopped him at the Fed with a full-on, MMT-spouting catastrophe.

Meanwhile, his “Build Back Better” American Socialism monstrosity of a bill would effectively give the United States the highest tax rates in what was once called the Free World, a world which the United States has led since right about the Casablanca Conference, but will no more if these moves go through.

The spending portions of that bill are also disastrous – not only because of their effect on inflation, but definitely because of that effect, too. The administration and congressional toadies are simply lying when they say that the bill “pays for itself,” so that the net effect on money supply would be nil. It will require huge borrowing even with the heavy tax increases. And that borrowing is to inject money – money unbacked by new productivity – into the economy, not, as has been true with QEs, to give it to banks to increase asset values in ways that don’t really increase money velocity under traditional measures. No, this will be continental script fed directly into a bonfire of the vanities.

Another parent of the ‘70s inflation was of course the exogenous oil-price shocks, resulting from OPEC actions in reaction to western support for Israel in the Yom Kippur war and the decline in oil production that followed the Iranian Revolution. Back in ’79 Jimmah’s response was to put on a sweater, ask us to shiver in the dark, and maunder about malaise.

The source of the current energy crisis is different. We had become energy independent during the last administration, so we should be just fine now, even if Europe has thrown itself into an energy crisis by adopting “green” energy policies on political rather than technological- or financial-feasibility schedules and China is, frankly, unraveling a bit all around.

But this administration ended all that. It killed the Keystone pipeline, shut down new drilling on scrub lands, made it too risky to invest in new natural gas or shale gas plays, and put SEC and other pressure on companies to divest from carbon-producing energy sources. It created the new American energy crisis, all by itself.

And now it attempts to solve the crisis with two of the stupidest tactics imaginable. First, it has begged OPEC to produce more energy at lower prices for us to enjoy. But that makes no sense at all. If carbon-based energies are bad, they’re bad all around. If they’re not bad, then let’s produce them here to solve our crisis and get the financial benefit from it.

The second response is even more venal. Waking up to the political dangers of inflation, last week the administration announced for Biden his plans to combat it, and lower energy prices, by “direct[ing] my National Economic Council to pursue means to try to further reduce these costs, and have asked the Federal Trade Commission to strike back at any market manipulation or price gouging in this sector.”

Good heavens. This is right out of the ‘70s playbook, too, when the Carter Administration and states went after “price gouging” and “windfall profits” because they had no interest in admitting that the causes of inflation were government policy. As they are today, but in spades.

If the FTC were honest, it would mount a pre-dawn raid on the White House and a lunchtime encirclement of the Old Executive Office Building and arrest everyone inside as the market manipulators who are 100 percent responsible for this crisis. But it would probably need the help of the FBI to do that, and there’s no question at all anymore but that the FBI is corrupt all through.

Which brings us to Secretary Stay-at-Home, whose notion of opening up the ports is to give additional concessions to unions for no material increase in activity, and whose eventual response to the transportation crisis was to dredge for us long-refuted claims in a Robert Caro biography of Robert Moses that underpasses were built to be racist.

Good job there, Pete. At least Carter was wise enough to deregulate trucking (and airlines) in the face of stagflation, rather than committing to spend vast amounts in necessarily non-productive ways to fight phantom roadway racism.

Earlier this summer I hedged against inflation by buying a house at a very low fixed interest rate that’s less than half of last month’s actual inflation rate, meaning that I paid an effectively negative real rate of interest on that borrowing last month. I’m not bragging; it’s rare that I make good investments, and I’m sure this one will somehow backfire eventually. But if I had to guess, I’d put us at much closer to 1973 (as the Great Inflation was getting completely out of control) than 1983 (when Reagan & Volcker – following policies the diametric oppose of those in play today) got it back under control.

Economies are not booming – are very much ailing – when the way to make money is to assume that policy makers are going to screw up hard well into the foreseeable future. But that’s very much where we are.