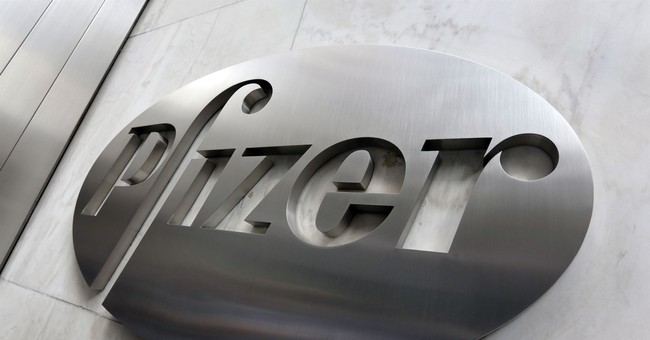 Pfizer – the drug company that produces one of the three COVID vaccines that the Biden Administration has now declared mandatory for millions – turns out to be a den of discrimination deserving loud condemnation, not government-mandated access to Americans’ bodily integrity.

As Tyler O’Neil (late of sister-site PJ Media, now at Fox News) has reported, Pfizer is the most recently recognized entrant in the New Racism derby. He reveals that Pfizer and its CEO, Albert Bourla, have explicitly (and publicly) embraced race- and ethnicity-based quotas that subordinate merit to skin color, and discriminate in hiring against white people on the basis of race.

Pfizer, and Bourla, have endorsed the notion that “white supremacy” is at fault for any aproportionality in racial outcomes or any police shootings of black people, thus calumniating white people while infantilizing black people. Predictably, Bourla has nothing to say about black-on-black crime, which results in vastly more deaths than occur as the result of police conduct; or black-on-white crime, which occurs much more often than white-on-black; or about non-racial, personal-behavior components of the success that any person achieves.

This objectively racist mindset is being forced on Pfizer employees through employee-training programs as well. I have been provided, through my work at the Free Enterprise Project (FEP), Pfizer-branded and company-distributed training materials that between them push for “breaking the silence” and starting “the right kind of internal dialogue” about race, a dialogue that fosters “safe space[s].”

What sort of internal racial dialogues does Pfizer advocate? Ones in which black employees are encouraged to speak their minds about race and to express their outrage and concern when black people are shot by police officers (regardless, it appears, of the personal responsibility of those shot) or when non-preferred candidates are elected to office. Whites, however, are given no similar expressive opportunities. The only roles they are granted in these materials are to listen, empathize, accept and apologize.

Concern is expressed that “[p]eople of color may have their guard up after bad experiences,” but the authors of these racist training programs don’t even pause to consider that the very programs themselves are designed to push white employees into cringing, apologizing, subordinate positions – into “bad experiences” that are designed to put “their guards up,” but also to forbid them to raise objections to such designations, or to the racism inherent in the programs themselves.

This, Pfizer, is racism. If microaggressions and “cultures” of systemic racism matter, they matter for all employees of all races. I can’t understand how anyone could believe that this doesn’t create a hostile work environment for white employees.

There’s more, though. Again through my work at FEP, I have been corresponding with executives at Pfizer about the company’s support of the so-called Equality Act. As I’ve discussed here before, the part of the act touted by supporters is irrelevant: workplace nondiscrimination against gay people has been guaranteed by Supreme Court decision. But we asked Pfizer and some other big supporters of the act whether they favored all the parts of it, including the highly discriminatory portions. Turns out that Pfizer does. It explained:

With respect to the Equality Act and other state legislative efforts, you also asked whether Pfizer supports the “extermination of federal religious freedom protections” and “the HRC’s push to destroy the ability of biological girls and women to compete successfully in their sports by requiring the inclusion of those sports of people whose physical attributes were formed with the assistance of male levels of testosterone.” I would like to point out that we disagree with NCPPR’s mischaracterizations of the Equality Act and state transgender legislative efforts on this topic.

Funny response, this. Pfizer failed to explain its theory about how we had mischaracterized the Equality Act. Instead, with wearying predictability, it followed up with a mini-lecture asserting that its position favored equity for all, while, implicitly, the rest of us are couthless cretins.

Thing is, though, the Human Rights Campaign (HRC), of which Pfizer is a “platinum partner” sponsor and which is cited in its little lecture to us, itself recognizes that the Equality Act will, as we said, require the inclusion in those sports of people whose physical attributes were formed with the assistance of male levels of testosterone. As the HRC explains, the act “explicitly prohibits exclusion from participation in, denial of benefits, and discrimination under federally assisted programs on the basis of sex, sexual orientation, and gender identity. Any school receiving federal funding would not be able to discriminate against students….” That means exactly what we said it meant.

Perhaps the company’s own mischaracterizations lie in a dispute about whether forcing such competition will “destroy the ability of biological girls and women to compete successfully.” Just two quick rejoinders to that possibility. Just days ago a former U.S. Army Special Forces serviceman choked out a woman competitor in three-odd minutes in an MMA fight that would be regularized by the act. And Connecticut girls’ track has been rendered uncompetitive by exactly the inclusions the act will require.

Perhaps, at Pfizer, completely undermining rather than utterly destroying a right for which girls have fought for 40 years is the sort of “equity” that it feels privileged to lecture the rest of us about. Which is just further illustration that equity is just another word for discrimination.

Meanwhile, there need be no question at all about whether the act exterminates long-standing religious freedom protections. It’s right there in the act: the Religious Freedom Restoration Act “shall not provide … a basis for challenging the application or enforcement of” any Equality Act provision.

That is simply extinguishing established religious liberties. Who is it that’s doing the mischaracterizing, Pfizer? And who are the bigots in need of lectures?

Now that Pfizer and its vaccine are integral parts of the Biden Administration’s (likely unconstitutional, and opposed by Candidate Biden) vaccine mandate, set to hit tens of millions of Americans, Pfizer has effectively become an arm of the government. You would expect – well, I would expect – that under such circumstances it would strive not to discriminate against anyone, as it will surely be under close and detailed scrutiny the next time investigatory powers change hands. Pfizer appears to disagree.

Meanwhile, where’s the equity in taking away the bodily integrity of tens of millions of Americans, Pfizer? Does equity demand that Americans renounce their control over – their choices about – their own bodies in the name of the government-asserted good of others? Or, as the great weight of the evidence certainly suggests, perhaps “equity” at Pfizer means Pfizer actively discriminates about who gets rights, and who is denied them.