Welcome Back, Carter: Biden Is A Bad '70s Rerun 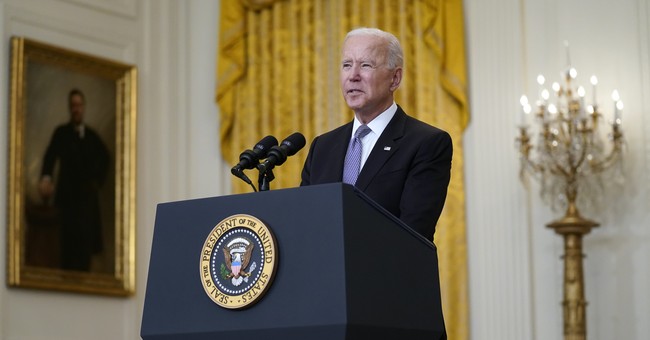 You have got to hand it to the nascent Biden Administration. (I won’t, for obvious reasons, ascribe any of this to him personally.) In a little over one hundred days it has managed what it took the bumblers of the 1970s a full decade to achieve: galloping inflation; rising unemployment and broken labor markets; inexplicable mishandling of Iran leading to international humiliation for the United States and a deeply fraught Middle East; and soaring gas prices and gas lines.

Since it appears that every conservative in my generation thought up the line “Welcome Back, Carter” (explanation for those whose joints don’t yet serve as automatic barometers) within the same few minutes last Tuesday, and since we do cerebral (ED: and obscure!) here rather than hot takes, I’ll instead just note that, of the administration’s astonishing record so far: Jimmy Carter Says Yes!

Never fear, though. Janet Yellen, Jay Powell, and Elizabeth Warren are convinced that they’ve figured out how to beat inflation. We learned that in the 1970s, Warren assures us.

What in the world is she talking about? The WIN buttons? Or the Reagan/Volcker exercise of squeezing inflation out of the economy by choking it with incredibly high interest rates? That worked, and it was necessary, but it caused terrific unemployment and economic sclerosis while it lasted. Is that the handy tool she has in mind, and of which speaks so lightly?

What we know absolutely fails is what we know her little authoritarian heart bleeds to reach for: wage and price controls, and a whole fleet of government interventions in the economy. They didn’t work then, and they won’t work now. That is, they won’t work if the goal is to tame inflation and get the economy moving again. If the goal is to make more and more of the population dependent on government and upon government-provided interventions, thereby increasing government power and decreasing individual liberty: well, if that’s the goal, then what “works” has a different meaning entirely.

Have no doubt, those of you too young to remember the ‘70s: once an inflation gets started, the economy chokes up, and has to get started again (last time after that long period of flushing the lines with staggering interest rates). People radically change their behavior if they think that the money in their pocket is getting worth less every week. They spend more quickly. They demand higher interest rates on their savings (i.e., a nominal interest rate that is higher than the rate of inflation, so that they are earning at least some real interest on their assets). They become more insecure, and they feel poorer.

They also demand more in pay, because their paychecks are now worth less (can buy fewer things) than they did (or could) last year. And when they demand more in pay, their employers must demand more for their products, just to stay even, to pay for those pay raises. But this in turn makes everything cost more – which is to say, it creates more inflation. And then this additional inflation makes the workers’ paychecks functionally smaller again, which causes them to demand higher wages.

This is the song that never ends…

Once inflation begins, the expectation of further inflation, by this cyclical mechanism, creates the very additional inflation that it anticipates. That dynamic is very hard to stop.

One way to stop it is to make economic conditions so bad that workers have no wage-pricing power, i.e., they can’t afford to ask for raises. That can be achieved by creating high unemployment (as by jacking up interest rates) and reducing the nominal value of the safety net for the unemployed (which can be achieved by leaving benefits nominally fixed while the inflation erodes their real value) until workers have to accept lower real wages (i.e., not ask for nominal raises, despite their purchasing power losses) until the inflationary spiral can end. Once inflation is forced to stop, people stop expecting it, and the cycle doesn’t resume.

This worked in the early 1980s, but it required lots of misery to get there. So much misery, in fact, that the Carter campaign invented the “misery index” (the sum of the inflation rate and the unemployment rate) to attack the Ford Administration, only to have the Reagan campaign club Carter’s own administration with it. (By 1984, Reagan’s low-tax and deregulatory policies, along with the rate-hike taming of inflation early in his term, had returned Morning to America.)

Will it work again? That question should not have to be answered; we shouldn’t be finding out. But people who are old enough to know better sure seem bent on forcing us into it. This administration is paying people not to work at the very time when the end of lockdowns are re-opening millions of jobs. This is both lowering total productivity (jobs not being done) while forcing employers to pay bounties to get would-be workers off their couches. So nominal wages are going up while real productivity goes down. That’s a pretty solid definition of inflation. And the same crowd that demanded those benefits also seeks massive minimum wage increases and universal basic handouts. Again, money without productivity.

Meanwhile, both current inflation and the expectation of future inflation have been whistled up out of the burnt-orange-and-olive-hued past. The inflation figures last week were the worst monthly results since, well, what’d’ya know, 1981.

Whatever it is that Elizbeth Warren thinks she’s talking about, one thing is certain: this is not the time to release, per the administration, $4 trillion more into the economy. Let’s see if she admits that and proceeds accordingly.

The 1970s were miserable. But there is this silver lining. It was the experience of the ‘70s that turned the hippies into the yuppies. Expect woke to fade fast in the face of hard reality, should we be on the verge of an “encore presentation.”

There are easier ways to teach the kids, though. There really are.