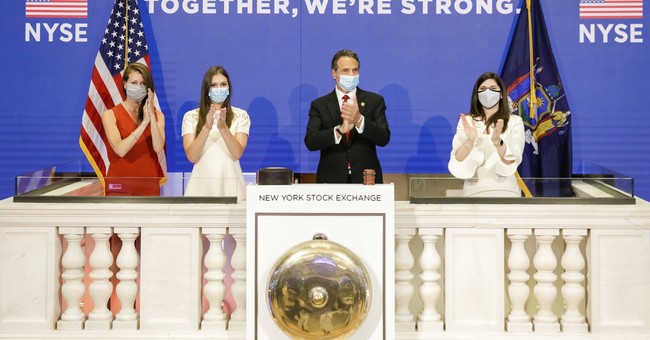 In the days before Thanksgiving, the New York State Comptroller issued a report arguing that horrifically governed blue states really do deserve a federal bailout because, in the case of New York, the state only gets back 91 cents for every dollar that it sends to the federal government. The report lacks objectivity or thoroughness, designed only to get the predetermined result. It also ignores the central tenet (or at least the central tenet that is publicly admitted) of “progressivism.” And its falsehoods, omissions, and elisions are marshalled in service of one of the worse causes imaginable: bailing out irresponsible public pensions that were used to buy decades worth of votes at public expense.

Nevertheless, the report could be Comptroller DiNapoli’s big break. Consider: the Academy of Television Arts & Sciences just announced plans to give New York Gov. Andrew Cuomo (aka “Andy the Grim Reaper”) an Emmy for his self-congratulatory, mendacious and meretricious COVID press conferences. And the Pulitzer committee gave the New York Times an award for its straight-up nonsense of a 1619 Project (an endeavor so flawed that even its chief author has now run away from what were just a few months ago the project’s foundational precepts: that the American experiment’s foundational fact and central issue were and are slavery and racism, with everything else comparatively minor). So DiNapoli’s study – obviously wrong in the service of leftwing ends, and emanating from New York – will probably snag him a Nobel in economics.

After all, even a slight and deeply flawed study is far more than the literally nothing that earned our last presidential Nobel winner his prize after he spent about four minutes in office being – with the preening self-congratulations that marks his every act and thought – not George W. Bush. (And, perhaps, fair enough: Many of us feel that he was a much bigger success at not being George W. Bush than at anything else he tried while in office.)

The goal of the Comptroller’s study is to permit New York and other states that have run up massive and unpayable pension obligations to take the begging bowl to Washington with their heads held high. But even a study rigged to do that has failed: the best the Comptroller can do is to suggest that New York only gets back 91 cents for every dollar that it sends to the federal till. This small differential would be swamped were the feds to grant these states what they need to be able to continue down their modern spending paths.

At all events, the study and its results are hopelessly flawed. They include as part of the amounts that flow to states moneys spent for “procurement.” Not much of this flows to New York – but that’s largely because most of this procurement is done by the Defense Department, and New York has actively opposed the establishment of DoD sites in New York in the past half century. Additionally, procurement spending is far different than relief or redistribution spending. In procurement spending, the government exchanges something for what it gets: work and services or goods, mostly. These are exchanges that leave parties (and the underlying state) neutral. But New York and the other blue-state spending pits are already right near the top of the league tables in spending that flows out of federal coffers in exchange for nothing in return. And that’s before the big bailouts they seek.

DiNapoli’s study also fails to grapple with the central fact, always ignored by east-coast policymakers, that significant portions of the money that flows to western states are “grants in lieu of taxes” that the feds pay those states as partial compensation for the fact that the federal government has retained control of vast swathes of those states – up to 85 percent in Nevada – and doesn’t allow the states to develop or to tax those areas. The equivalent figure in New York is 0.3%.

If DiNapoli and Cuomo are ready to hand over two-thirds of the state of New York to federal control, and to diminish their power, revenue streams, and opportunities for graft proportionally, then perhaps we can begin to consider their claims. And God knows the people of the upstate, who have been ground into poverty by mismanagement from the downstate majority for the better part of a century, would rather be governed by almost anyone else. You want your bailout? Allow everything northwest of Westchester County to become a new state. Then we’ll think about it.

The most astonishing thing about DiNapoli’s analysis, though, is that it isn’t progressive. It isn’t weighted by the relative wealth of each of the states of the union. I thought for sure – gee, I wish I could find the source – that progressives are absolutely in favor of taxing the rich more for the benefit of the less privileged and more vulnerable. But if this were true, then Cuomo and DiNapoli would surely have pointed out that New York, one of the most privileged states, should, so far from getting a bailout, be volunteering to pay more of its “fair share.” Isn’t that how this all works?

And finally, consider why New York and all these blue states are so broke: it’s because their corrupt governments have spent decades buying government-worker votes with promises of huge pensions that they then have failed to fund. So they want all of us, in responsible and relatively poorer states, to pay the extravagant pensions and retirement benefits for already overpaid government workers who are the first line in the woke attack on the American way of life and the first to fund the politicians who have the same goals.

I am given to understand that you New Yorkers have all sorts of picaresque terms for what I think you should do with your calls for a bailout. Select at will, and with my compliments.