Prepare For The Man-Hate To Boil Back Over 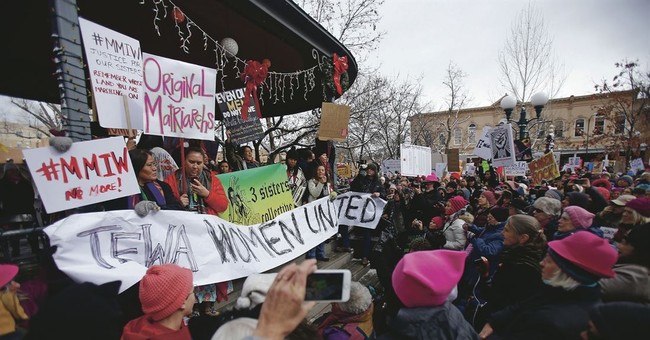 Minority groups supported right-of-center candidates in 2020 at much higher levels than in presidential cycles since 1960. In many areas, the majority of Hispanic votes were cast that way. Black votes for the right soared. Even including the weight of the fraudulent bails of votes very likely cast in the early hours of the morning after the election, once poll watchers had been thrown out and the windows into the counting rooms were covered over, such votes by black women doubled, from four to eight percent, while those of black men reached nearly 20 percent.

It’s this latter figure, and its Hispanic equivalent, that will propel the man-hate agenda that I expect will revive with feral vigor in the coming months. That’s not a terribly bold prediction, as its first flourishings began on election night itself.

On Nate Silver's FiveThirtyEight blog, one contributor noted that early results suggested high levels of minority-voter support for the right, especially amongst men. The blogger’s hot take: apparently minority men’s male toxicity and oppressiveness overwhelmed their “person of color” victimization. Because of course.

There will be much more of this in coming months. These people are incapable of imagining that all of their horrifying wokeness –the man hate; the white-person and “whiteness” hate; the absolute unconcern for black lives taken by other black lives, or about police injustices committed against non-black citizens; the ferocious attempts to destroy the lives of anyone who disagrees with them – is both deeply wrong and tremendously off-putting. No, rather than question, even for a moment, her grim and grimy shibboleths, the blogger reached for an arrow already easily within reach in her quiver of hate: Men Suck.

We’ve already been subjected to quite a bit of this in recent years. Not so long ago, I would have counted myself a feminist – certainly by the lights of what feminism meant when my mom and I watched Mary Tyler Moore build a place for women in the work world on Saturday nights. I’m resolutely and utterly in favor of equality before the law and of nondiscrimination (including not discriminating on the basis of viewpoint or political participation). And that’s what feminism meant then: overcoming male chauvinism.

But now it means the reverse: the instantiation of female chauvinism at every level. Hiring and promotion preferences and quotas; the constant celebration of anything any woman wants to do ever (so long as it does not conform with any traditional notions, which are disparaged even when held or enacted by women); the incessant vilification of men and of male attributes (except acts of male submission, which are required, but are not sufficient – nothing can be – to wash away the sin of being a man).

This is, of course, straight up evil. Vilification and subjugation by sex is wrong regardless of the vector. But what it does to boys and young men makes it vile beyond expression. When I was growing up in the ‘70s and ‘80s it was still important to reinforce that girls can participate and succeed fully in the world. Now, though, the “girl power” mantra rings constantly in the ears of children who have never doubted it, and is matched with constant denigration of men and boys. This creates – as I know firsthand, to my heartbreak and my fury – confusion and self-doubt and feelings of guilt in young boys; that is as evil as the subordinate way in which girls were treated in previous generations. Duh. And the double standards and denial of due process applied to young men on college campuses ought to result in the sort of “largely peaceful” protests in which other groups have recently indulged. When it finally does, I’m sure they will be treated with the same regard and respect as this past summer’s demonstrations. (Ahem.)

We men who still retain a little intestinal fortitude, and the women who believe in true equality of the sexes, must step forward to fight back against this incipient new wave of woke-woman chauvinism. Here are a few suggestions.

Meet any discussion of “toxic masculinity” with a counter-discussion of “feminine hysteria.” The discussions mirror one another exactly. For years, one of the chief ways that women were demeaned and discounted was for their behaviors and concerns to be dismissed as “hysterical” overemotional reactions, which demonstrated their inability to behave rationally and civilly and justified their second-class status. Likewise, the woke among us claim that masculinity – as traditionally understood and as inherent in male human nature – is aggressive and testosterone-driven and makes men angry and emotional and unable to behave rationally and civilly, and justifies second-class status for men. These are the same move, just with the vector reversed. So every time someone wants to discuss one, demand that the conversation include the other. Explain why. And watch the fun.

Demand (yes, demand; that’s how public discourse proceeds these days, and we must fight as hard as the other side) that Disney, Netflix and all other “content creators”  offer plenty of children’s content that celebrates the skills and abilities of boys and girls on something like an equal basis, and without constant gender-reversals. Demand that boys get to be successful and brave and strong and reliable and clever as often as girls do.

If your little boys are coming home with tales of woe from school, claiming that girls are being celebrated while they’re being told that boys and boy-behavior are bad, get yourself into the school and protest – loudly and continually – until things change. You won’t be alone; sane parents don’t want their boys turned into mewling, apologizing, empty-chested shells.

And if you’re subjected to this nonsense at work, object if you can -- or gather evidence, create a record, and sue.

It’s time to get serious about systemic discrimination. The real stuff.