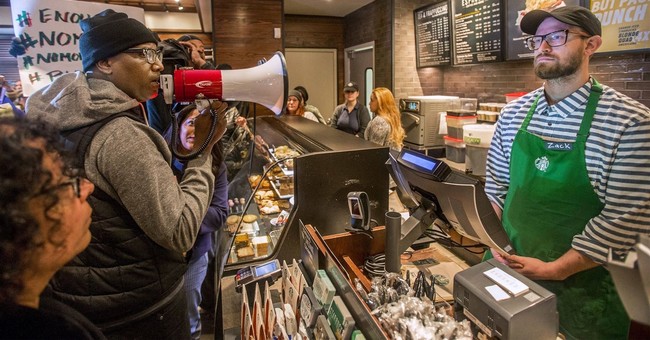 The agitators who indignantly demand that corporations adopt their radical leftwing policy wishlists don’t care a hoot about corporate profits in the near term or into the “sustainable” future. If they did, they’d pause at evidence that they’re urging corporations to light a bonfire of their profits and send their customers stomping with glinty determination toward their less “woke” competitors.

They would also have given a little more thought to the paucity of their own supporting arguments. Perhaps the dumbest of these is the claim that “the millennials have made their feelings clear. They demand these policies.”

Well. Where to start?

First, evidence grows by the day that performative wokeness hamstrings corporations. Ratings for the NBA finals were down 45 percent and league officials have announced that they will take their activism “off the court” next season as they face a 40 percent drop in revenues. NFL ratings are also down significantly. ESPN has had to cut costs and fire workers fairly regularly, and is headed for another round. Beyond sports, ratings for the tortuously political Emmys were the worst ever, despite there being essentially nothing else new to watch.

These are leading indicators, because the wokeness in these industries has been so obvious. These consequences should be taken very seriously by corporations that have not yet dived deep into the fetid muck of racism, sexism, censorship and statism that are the increasingly obvious real consequences of ESG (standing for environmental, social and governance, the areas in which the advocates focus their harms). Many have tried to have it both ways this year, declaring that “black lives matter” while avoiding support for the controversial Black Lives Matter organization or other groups that have made some efforts to hide their radical views, but have not renounced them. There’s still time for these companies to save themselves.

A moment’s fleeting consideration reveals the evanescence of the claims for why companies’ futures depend on veering far left. A central ESG claim is that millennials are irreparably woke, so any companies that don’t meekly follow their dictates will lose them (and, by implication, all future generations) as customers forever.

Only a moron in a hurry could swallow this argument for even a moment. Who has not heard the old saw, usually ascribed to Winston Churchill (but that he may have adapted from Disraeli), that “any man under thirty who is not a liberal has no heart, and any man over thirty who is not a conservative has no brains?” But we need not look back so far. The evidence is all around us. The hippies of the Age of Aquarius, most of whom are still amongst us, transformed by 1982 into the yuppies of the Reagan Renaissance. Fourteen years of living with the consequences of their own youthful beliefs – the civil decay and economic deterioration that resulted from the ever-encroaching statism of the late ‘60s and ‘70s – ended that generation’s naïve fancies of youth and left them supporting smaller government, less regulation and more liberty.

The case will be the same again. The millennials were taught a lot of nonsense in school, education having been captured in the left’s long march through American institutions. Much of it has been and remains perniciously wrong, as with the risible but dangerous 1619 Project, which seeks to reduce all of American history to nothing more than a brutal tale of white evil, and which is being used to indoctrinate children as early as kindergarten.

Stories – and complaints – about what the rising generations don’t know are legion, and hardly new: Plato (yes, that one) complained about “kids these days” nearly 2,500 years ago. And some of what they’ve been taught about the predicate necessities for civil society are genuinely disturbing, with significant minorities being fine with banning “hate” speech and otherwise curtailing foundational civil liberties.

One illustration of this disturbing misunderstanding arises out of the term “whataboutism.” It seems to be a fairly new term, and it appears that the younger generations have been told, more or less universally, that it’s wrong.

This is a problem. “Whataboutism” is an attempt to query whether everyone is being held up to the same standards. For those as out-of-the-know as I, here’s an example. Imagine that I say, “We don’t need to investigate or report on these credible charges of corruption against X.” Then you respond, “Wait. That doesn’t seem just. What about the years that we spent investigating and reporting on not-very credible charges of corruption against Y? Shouldn’t we follow the same rules for everybody?” Then I reply, “That’s just whataboutism. This is too important for that.”

As that stilted little colloquy suggests, objecting to “whataboutism” is really objecting to holding all parties to the same objective metrics. Applied to the public arena, demanding “what about?” provides the basic protection of rule of law rather than the dictatorship of those whose actions are shielded by the strategic rejection of “what about?”

As I say, it’s not immensely surprising, under the circumstances, that the rising generations would fall for this ruse, given what they’ve been taught. But there is no reason to believe – and surely no social-science evidence to suggest – that the millennials are somehow dumber than the boomers. It would be folly of the firing sort to make long-term corporate decisions on the presumption that this generation will be the first never to shift across the political spectrum as it ages and learns.

Remember, corporations: the millennials are only beginning their earning and spending power, because they’re only beginning their careers. By the time the massive wealth transfer the ESGers keep touting has occurred, the scales will have fallen from their eyes. And they, like their elders today, will have little time for companies that let themselves be discommoded by the underinformed radical poses of youth.