When It Comes To Climate Science, Benedict Cumberbatch Is No Sherlock Holmes 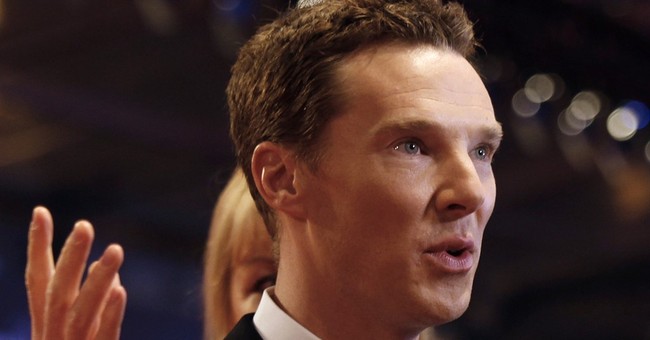 It’s a shame to have to say that. He’s been immensely watchable since his long-ago appearance in a not-very-good British one-off series called Fortysomething that he, and mostly Hugh Laurie, saved from being dire. Tremendous Sherlock, captivating Alan Turing. But when he spreads his wings and takes flight into the policy realm, the wax melts and he plunges into vapidity.

Which he no doubt blames on global warming. And he has a plan to stop it: by restricting and constraining our lives, but not his own. During the “extinction rebellion” protests (and related thuggery) a year ago, he and a cadre of fellow luvvies (a Fleet Street aphorism for the most precious and self-regarding of thespians) signed an open letter acknowledging that their acting work – and the related flying hither and yon for absolutely vital stints on late-night couches (no, no – the talk-show kind) – absolutely belched carbon, but that this glaring hypocrisy could not keep them from calling for drastic cultural and policy change to deflect the “sixth great extinction” that is about to befall us.

The signees made no commitment to stop their carbon creation, or even to slacken it. Their voices, you see, are so powerful that by raising awareness about this coming tragedy, they earn the right to use as much carbon as their art requires.

The rest of us, not so much. These treaders of the boards – while bravely parroting the overdramatic company line of their industry – were not so brave as to state clearly the implications of their adopted policies: that those without divine dramaturgical powers would see their living spaces, travel opportunities, and modern comforts dramatically limited. Billions could even face starvation as economic productivity collapses.

But it’s probably not fair to single out Cumberbatch or even actors in general for their failures in this arena. Last week in these pages I argued that the loud legions of “science” boosters seldom understand the methods or limits of science (or ignore those limits for partisan purposes), and so “demand” more from and in the name of science than it can possibly provide or support.  And nowhere, perhaps, is the idea of science so comprehensively abused as in the realm of climate and general environmental policy.

“Climate science” has morphed into religion for its adherents. In real scientific endeavor, no one accuses others of “denying the science” simply for building models that weigh inputs differently than those of the true believers, or who derive different policy proposals from the available science. There’s no space in real science for charges of blasphemy.

The climate, meanwhile, is a very complicated system, with many inputs that could have many potential – and interrelated – effects.  Any models that purport, scientifically, to suggest what effect rises in CO2 levels will have over time, and then what effect will arise from reductions in levels over some other period, will necessary produce possibilities, ranges, and likelihoods of contrary outcomes. They will not produce definite and simplistic results, such as “we only have X more years to save the world, but if we cut CO2 by Y amount in Z years, we definitely will save the world, and so we have to do that and nothing else.” Those asserting such nonsense are charlatans, not scientists – however shrilly they might shriek, or artfully they might swan about.

I have delved into these and other complexities of climate science and policy in a newly published policy paper. That piece reviews the questions that competent policymakers must ask themselves on the way to setting climate policy. These include the questions that Benedict and his buddies were too timid to address, such as the odds that the models are wrong, the real-world effects that their carbon-eliminating demands would have on the world, the possibility that we’re too late (this hardly being the first time we’ve been told that we have only 6 or 8 or 12 years left) and so should maximize production now to deal with the now-inevitable consequences, and many more considerations.

I pose these questions to illustrate the practical impossibility of corporations taking upon themselves the task of climate-change policymaking, as urged by the coalition striving to force publicly traded companies to adhere to the leftwing ESG (environmental, social and governance) view on a range of political questions. For however hard it is for duly elected policymakers to figure out what to do, and what to sacrifice, on the basis of scientific probabilities and non-scientific preferences and commitments, it’s vastly harder for corporate leaders to attempt such policy.

They have to consider all of the policy issues that the real policymakers have to weigh, and then have to gauge the likelihood that those policymakers are going to reach the same conclusions as corporate leaders, and whether they are likely to steer the same course through the relevant timeframe, or to switch strategies. They’ll have to guess whether formal governmental commitments, such as signing the Paris Agreement and subsequent accords, are for real, and will result in real carbon reduction worldwide, or are instead meant for public consumption, and will cloak full-speed production without much regard to real carbon reductions. (The current evidence very much suggests the latter conclusion.)

Perhaps unsurprisingly, I conclude in the paper that corporate leaders lack the knowledge and resources to undertake company-level climate policymaking with fidelity to their fiduciary duty to their shareholders thoroughly to investigate and wisely to make important and expensive business decisions. And so they shouldn’t – and probably legally can’t – try to do so.

Climate policy tends to make dummies out of most parties who have a quasi-religious, rather than a scientific, relationship to field – both on the boards and in the boardroom.