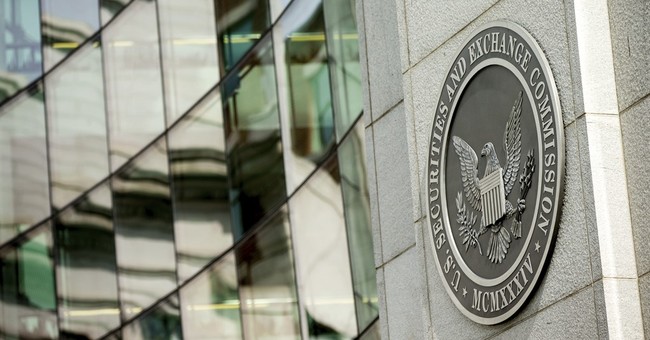 In a move likely to help investors and blunt the left’s attack on American businesses, the Securities and Exchange Commission (SEC) recently finalized a rule requiring proxy advisory services to provide their clients with corporations’ rebuttals to the services’ advice. If properly enforced, the rule should help to curb the increasingly frequent adoption of shareholder proposals on the strength of votes cast not by real equity providers themselves, but by institutions voting those shares in the ultimate owners’ supposed interest.

Many of these proposals have been both business-stifling and overtly political.

Left-wing activists are deeply engaged in trying to bend American corporations to their political will. In aid of this effort, a coalition of organizations offer hundreds of proposals at shareholder meetings every year that call upon shareholders to vote their shares to advance their agenda.

Most of the time, these ESG proposals (named after their ostensible purpose: to improve the environmental, social and governance policies of the corporations) are not well-reasoned, politically neutral attempts to advance their stated purposes. Instead, they are partisan proposals backed up by self-serving and incomplete research into the efficacy of the proposal on the company at which it has been made.

Here’s an example. The coalition offers proposals intended to force corporate divestment from carbon-based energy use and development in favor of the standard litany of renewal resources. But, in supporting their proposal, the backers effectively assume their conclusion. They claim that it’s economically wise – in fact, it’s necessary – for companies to divert from carbon fuels into renewables (though not, interestingly, the potentially cleanest and most abundant of all fuels, nuclear) by assuming that a company’s carbon-fuel investments will all be stranded (i.e., that the remaining investment value in them will be lost) by 2050. Their rationale is that this must occur because the United Nations, through actions such as the Paris Agreement, has suggested that it should.

But such boosterist assertions by a proposal’s backers offer no objective facts about its value to the company or its ultimate shareholder owners. Too many risks and too much evidence have been ignored. What if the Paris Agreement is not followed? The United States is not a party to it, and other big players’ commitments are distinctly notional. What are the odds that those assets won’t be stranded after all? What does that do to the predicted value of the proposal to the company? What is the risk that renewables won’t be able to do the job – or won’t be able to do it without other countervailing environmental damage (such as arises from the mining and use of rare earth metals) by 2050, or at all?

These and a host of related questions about most ESG proposals have not yet received sufficient public consideration. (Full disclosure: I work for the National Center for Public Policy Research, and particularly its Free Enterprise Project, which reveals these sorts of flaws and biases in the ESG movement and offers most of the shareholder proposals that are not efforts at left-wing capture of big business.)

Shareholders are under no obligation to provide objective evidence to support their proposals, and until the SEC issued its new rule, proxy advisory services – a market almost entirely captured by the firms Institutional Shareholder Services (ISS) and Glass Lewis – had no obligation to explain the rationale for their recommendations or share any conflicting information (even from the target corporation) with their clients.

The new rule changes that somewhat.

The SEC has reminded fund managers that they cannot avoid their fiduciary duties to their clients simply by relying on the black-box mechanisms of proxy advisors. And while the rule does not – as might have been wished – apply fiduciary duties to proxy advisory services, it does require the services to let their clients know about any objections target companies have to the proposals that the services have endorsed. In turn, this will require the fund manager to reach an objective and properly researched conclusion about the economic value of the proposal to the shareholders.

One of three things is likely to happen as a result of the SEC’s new rule. The quality of ESG-backers’ research in favor of their proposals could improve. The proposals themselves could become more genuinely about improving firms’ value rather than jamming left-wing politics into the shareholder proposal process.  Or the number of such proposals offered each year might decrease.

Any of these results would be a win. Kudos to the SEC for this rule.