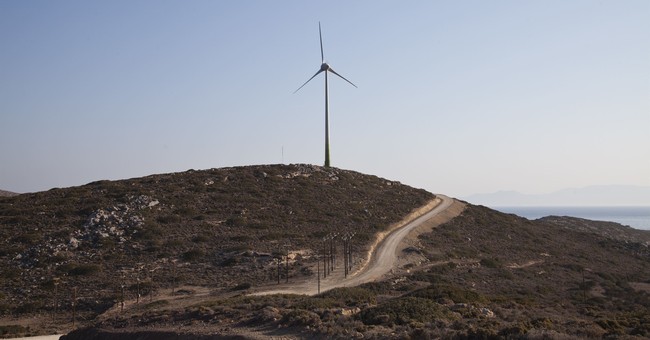 The hit movie Frozen wasn't popular in Oklahoma and Texas during the recent arctic blast. We hit temperatures not seen since 1905, -13 degrees Fahrenheit in Tulsa the other day. Democrats, pay attention! I know it’s hard to keep two thoughts in your mind at one time, but focus: The record cold for this time of year was set 116 years ago. What does that do to your nonsense that the climate is becoming more extreme?

Oklahoma and Texas had to fall back on rolling black outs, like poor underdeveloped countries, because utilities couldn’t produce enough electrical power to meet the demand to keep warm. And they couldn’t produce enough electricity for two reasons: 1) half the wind turbines froze, and 2) natural gas supplies froze. (Let me explain for the Democrats: natural gas contains a lot of water when it comes out of the well and, well, water freezes.)

Most utilities burn natural gas to produce electricity in Oklahoma and Texas (also known as Baja Oklahoma). Oklahoma lost 30% of its natural gas production as did Texas because the gas froze at the wellhead and processing plants. We lost our wind turbines, which produce 12% of Oklahoma’s capacity, as did Texas, but wind produces 23% of the electricity in that frozen state. Texas had shut down three coal-fired plants in 2018 because of regulations.

Fox News's Tucker Carlson in his monologue of February 15 made fun of the environmentalism that persuaded Texans to put so much trust in wind generation.

"The ironically named Electric Reliability Council of Texas, which oversees the grid, had no solution to any of this. They simply told people to stop using so much power to keep warm. So in Houston, hundreds of shivering Texans headed to the convention center like refugees to keep from freezing to death. Some Texans almost certainly did freeze to death. Later this week, we'll likely learn just how many more were killed as they tried to keep warm with jury-rigged heaters and barbecues and car exhaust…"

“Rather than celebrate and benefit from their state's vast natural resources, politicians took the fashionable route and became recklessly reliant on so-called alternative energy, meaning windmills.

“Fifteen years ago, there were virtually no wind farms in Texas. Last year, roughly a quarter of all electricity generated in the state came from wind. Local politicians were pleased by this. They bragged about it like there was something virtuous about destroying the landscape and degrading the power grid. Just last week, Republican Gov. Greg Abbott proudly accepted something called the Wind Leadership Award, given with gratitude by Tri Global Energy, a company getting rich from green energy.

“So it was all working great until the day it got cold outside. The windmills failed like the silly fashion accessories they are, and people in Texas died.”

Now I enjoy a good laugh at the expense of environmentalists and Texans, as any Okie does, but hold on Tucker! You, Senator Mario Rubio, Oren Cass, and the “conservatives” at the American Compass have promoted this sort of state industrial planning for years! The federal and state governments regulate no industry more than energy and they have coerced states with stricter environmental standards and subsidies into adopting wind and solar energy and natural gas powered electrical generators in order to kill king coal and the dirty air from his exhaust. I wrote in 2007 about the massive failure and waste in the US Department of Energy’s program to direct production in “Energy Policy: Wisdom or Waste?” The deployment of wind turbines in Texas and Oklahoma is that sort of industrial policy at its finest!

Conservative protectionists like Carlson can see only the imaginary blessing of their proposals for a state directed industrial policy. Somehow, they manage to ignore the failures. In that respect, they imitate Democrats who are wedded to the fallacy of comparing reality to fantasy. State directed industrial policies have failed every time people have been foolish enough to allow them. The recent failure of the power grids provides further evidence.