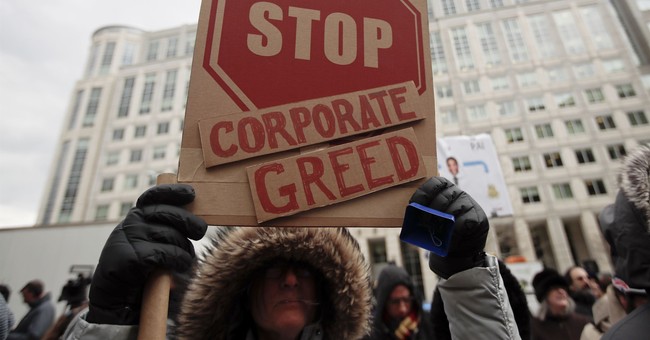 Gordon Gekko in the motion picture Wall Street regurgitated what socialists have been saying for a century: capitalism is based on greed. Here is part of his monologue:

The point is, ladies and gentleman, that greed -- for lack of a better word -- is good. Greed is right. Greed works. Greed clarifies, cuts through, and captures the essence of the evolutionary spirit.

Greed, in all of its forms -- greed for life, for money, for love, knowledge -- has marked the upward surge of mankind. And greed -- you mark my words -- will not only save Teldar Paper, but that other malfunctioning corporation called the USA.

As I wrote recently, the definitions of greed are confusing. Even the poorest in Western countries are guilty of egregious greed if we adhere to dictionary definitions. The writers who put those words in Gekko’s mouth appear to agree. But if greed is to remain an evil, should we call the self interest that Adam Smith identified as the motive of business people? Is loving one’s family and wanting them to live more comfortably greed? Is trying to produce a better mouse trap greed? Is striving to have enough to give to charities or churches greed?

Socialists see only two evils in the world today: white people and greed. If they could get rid of both, the U.S. would finally be exceptional and a city set on a hill that conservatives claim it is. But what happened to envy? According to Helmut Schoeck in Envy: A Theory of Social Behavior, envy was considered the most terrifying of the seven deadly sins through history. He uses Chaucer’s “The Parson’s Tale” in the Canterbury Tales as an example:

But Chaucer sees envy as the worst of sins because nearly all the rest oppose only one virtue, whereas envy turns against all the virtues and against everything that is good. It denies, as we would now say, every value in the scale or table of values. Because the envious man takes exception to his neighbour’s every virtue and advantage, the sin of envy is distinct from all others. Every other kind of sin is in itself pleasurable, to some degree productive of satisfaction, but envy produces only anguish and sorrow. Chaucer holds envy to be a sin against nature because it consists in the first place of distress over other people’s goodness and prosperity, and prosperity is naturally a matter of joy. In the second place envy consists of joy in the ills and suffering that befall others. This envy is like the devil, who always rejoices in human suffering.

Today, envy has become a joke. Everyone claims to suffer from it. “I envy your new Lexus!” we say, really meaning, that’s a nice car. But the old-fashioned, destructive envy still exists according to Dr. Rainer Zitelmann, author of The Wealth Elite: what makes the super rich tick? Zitelmann made these comments in an interview:

“Well, we started by asking representative samples of people in the United States, Germany, Great Britain and France dozens of questions. Analysing their responses, three groups emerged: social enviers, non-enviers and ambivalents. The characteristic feature of the social enviers is that they do not primarily want to close the gap between themselves and the financially successful by improving their own situations, but by making life worse for the rich – by taking things off the rich.

“…for each country we calculated the relationship between the two groups. We called this the Social Envy Coefficient. The greater the number, the higher the levels of social envy in a society. France has the highest coefficient (1.21), followed by Germany (0.97). In the United States (0.42) and Great Britain (0.37), social envy was far less pronounced.”

Less envy explains some of the difference in wealth between the U.S. and Europe. So, how did envy morph from the most terrifying of sins to a joke? Socialists redefined envy as justice. The most popular reformulations of justice come from John Rawl’s book, A Theory of Justice, which stands firmly on envy as a foundation.

Why does real envy matter? Schoeck wrote that envy kills innovation that is the engine of economic development. The Industrial Revolution was born in the Dutch Republic, and the Anglo countries because Christianity suppressed envy enough to allow for innovation and economic progress.

Adam Smith demonstrated in Wealth of Nations that competition controls greed better than any effort by the state because greedy people can purchase politicians at a cheap price and have regulations written that feed their greed. But markets cannot compete with envy. No legislation will dampen it. Only Christ has the power to free us from it. As the U.S. becomes less Christian, envy will spread like a green slime.

For the future of this country, Americans need to get rid of the envy jokes and resurrect fear of envy. Every time a socialist mentions greed, we need to point out their envy.