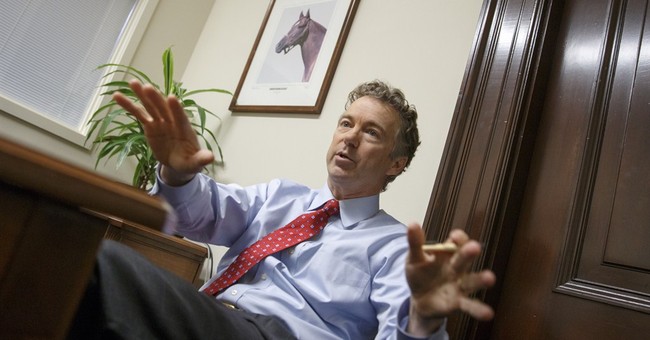 Sen. Rand Paul is drawing liberal fire from many left wing commentators, now including Prof. Paul Krugman. Many of the criticisms are badly off base. As noted in yesterday’s column there is so much simply factually incorrect about The New Republic’s Danny Vinik recent Rand Paul Has the Most Dangerous Economic Views of Any 2016 Candidate — for example — that one hardly knows where to begin. So, to quote the composer John Cage, let’s “begin anywhere.”

First, Rand Paul, unlike Ron Paul, nowhere appears on record as advocating the gold standard. Implication of such advocacy to Sen. Paul is, flatly, wrong. This is sloppy journalism.

Second, whatever Sen. Paul’s views may be, the current overwhelming opposition to the gold standard by academic economists is reminiscent of nothing so much as the Wizard of Oz’s movie peroration: “I, your Wizard, per ardua ad alta, am about to embark upon a hazardous and technically unexplainable journey into the outer stratosphere…to confer, converse, and otherwise hobnob with my brother wizards.” The pronouncements of such eminent economic wizards as those sampled by the Booth School are as unpersuasive as they are rotund. In the unvarnished language of Forbes.com contributor Nathan Lewis, a leading witness to the fact that the Emperor has no clothes, “Academic economists of every variety, along with high-fashion architects, are now generally regarded as deluded nincompoops….”

Third, it is irrelevant and downright misleading to observe that the gold bugs have been (as indeed many of them have been for 40 years) prognosticating skyrocketing inflation. This misleads by collapsing the distinction between the primary advocates of the gold standard by such public intellectuals as Steve Forbes and Lewis E. Lehrman (with whose Institute I once had a professional relationship) and academics such as Prof. Lawrence White and Prof. Brian Domitrovic, among many others … with the views of the gold bugs. These represent two entirely separate ideological camps.

It betrays deep ignorance to conflate them. Responsible opponents of the gold standard really should come to grips with the fact that few, if any, of the leading advocates of, or sympathizers with, the gold standard have been prognosticating inflation, skyrocketing or otherwise. The (extensively) stated leading concerns of gold standard proponents have been historically anemic growth rates and median family wage stagnation — both of which are in evidence — rather than incipient hyperinflation.

The concerns raised are well grounded and a far cry from the straw man ones presented by Vinik.

Vinik shows his hand — as a fabulist, not a journalist — in his final paragraph.

Of course, the Republican Party itself has an incredibly misguided position on monetary policy. In 2012, its platform included returning to the gold standard. That’s a good reason why just about any Republican nominee would be a dangerous president. But Paul is far more open about his disdain for the Fed, and given his ideological bent, he’s far less likely to listen to conservative economists who reject his monetary policy views. At least on the economy, that makes Rand Paul by far the most dangerous candidate in the 2016 field.

“[J]ust about any Republican nominee would be a dangerous president”?

Vinik, had he taken a moment actually to read the GOP 2012 platform, would have discovered that nowhere in its platform is there a call for a return to the gold standard … or even the mention of the gold standard (except as a metaphor for the quality of care for wounded warriors). It contains, rather, a call for a “commission to investigate possible ways to set a fixed value for the dollar.”

Vinik by no means is the only commentator to go into hyperbolic meltdown over Rand Paul. Nobel Prize economics laureate Paul Krugman, recently, in Money Makes Crazy:

Right now, the most obvious manifestation of money madness is Senator Rand Paul’s “Audit the Fed” campaign. Mr. Paul likes to warn that the Fed’s efforts to bolster the economy may lead to hyperinflation; he loves talking about the wheelbarrows of cash that people carted around in Weimar Germany.

Prof. Krugman, a polemicist, characteristically exaggerates. Mr. Paul “likes to warn?” The record demonstrates two brief statements of concern, made in obscure venues, by Dr. Paul. If there are any more they must be obiter dicta in venues even more obscure, showing these “likes” to be far less than a leitmotif of Paul’s rhetoric, much less agenda.

Krugman goes on to indict the Republicans as “monetary crazy” — based mostly on a few stray comments and some utterly irrelevant, outlying, positions such as one derived from Ayn Rand. Few of the positions he cites are any part of the real discourse now ongoing among the center right. Krugman studiously ignores intelligent concerns stated by the Honorable Paul Volcker, the Honorable Jeb Hensarling, the Honorable Scott Garrett, and the Honorable Kevin Brady, among others, as well as scholarly publications by Heritage Foundation, Cato Institute, Atlas Foundation, and other center-right policy institutes (such as American Principles in Action, which I professionally advise).

Prof. Krugman and Danny Vinik thus present themselves as exhibits in support of the observation of Sen. Nelson Aldrich, head of the National Monetary Commission, before the New York Economics Club in 1909, “[T]he study of monetary questions is one of the leading causes of insanity” … (which the erudite Krugman’s headline, Money Makes Crazy, echoes).

Liberal fire is a badge of honor. Liberal fire will be an asset, should he choose to run, in the presidential primaries. Rand Paul draws liberal fire.