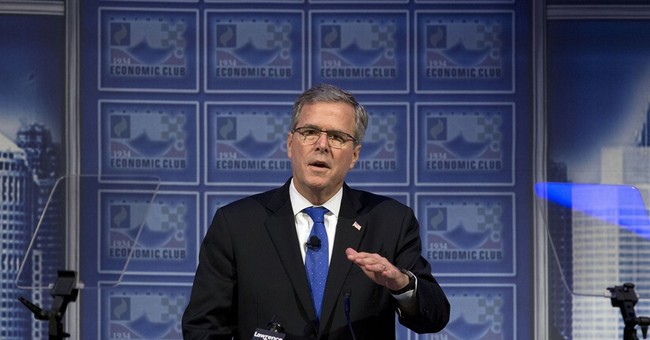 The Republican Party has an embarrassment of riches in good prospective presidential contenders for next year's race. Thus Gov. Jeb Bush’sdebut speech — on February 4th, in Detroit, the start of of his “Right To Rise” tour — took on heightened importance.

Presidential campaigns are about much more than name recognition, résumé, charisma, and money. All of these matter. Yet…

Purpose matters more. The electorate, not the elite, will decide, after interviewing the contenders throughout the primaries and then in the general election, who gets to occupy the Oval Office. And we voters want to, and get to, know what our candidates are promising for us before we hire them.

Thus it is uncommonly important that Jeb Bush’s first major speech as an aspirant was firmly grounded in the supply side vision of mutual prosperity. Governor Bush presented supply side economics more capably, and more emphatically, than any presidential contender since Ronald Reagan used it in 1980 to blow past Governor Bush’s father to secure the Republican presidential nomination. And then to blow past the hapless incumbent Jimmy Carter to inaugurate Morning in America.

There are important specifics still to be spelled out. Bush’s continuing viability depends on the specifics of what he will offer. Still, in his first at bat in the World Series of politics Bush hit a home run.

There is a lot to love in his speech. For me and for some other supply siders the coup de grâce came here:

Growth above all. A growing economy, whether here in Detroit or throughout this country is the difference between poverty and prosperity for millions. If you want to close the opportunity gap, grow the economy. This is a principle that concentrates the mind.

If a law or a rule doesn’t contribute to growth, why do it? If a law subtracts from growth, why are we discussing it? And for what it’s worth, I don’t think the US should settle for anything less than 4% growth a year – which is about twice our current average. At that rate, the middle class will thrive again.

And in the coming months, I intend to detail how we can get there, with a mix of smart policies and reforms to tap our resources and capacity to innovate, whether in energy, manufacturing, health care or technology.

The fact that Bush recognizes the possibility and implications of of a 4% rate of economic growth is extraordinary. Economic growth is not merely the best way. It is the only way to let the middle class thrive.

The “right to rise” almost certainly, absent a major foreign policy crisis, will be the issue on which Election 2016 will be fought out. As James Carville once communicated to intellectually promiscuous candidate Bill Clinton: “It’s the economy, Stupid.”

Demanding 4% growth — implying steady demographic and strong productivity growth — is ambitious but not absurd. Reagan experienced a 7% year -- and a 4.9% average -- rebounding out of a recession. And as I previously have written:

$6 trillion in new federal revenues is just the byproduct of 4% economic growth. Of even greater importance: an economy generating more (and better) jobs than there are workers. That could cut the Gordian knot of immigration reform: America will be yearning for more immigrants, documented or not. 4% growth (somewhat less, actually) makes Social Security and Medicare solvent for as far as the eye can see.

By declaring “growth above all” Bush covered the first essential requirement of a major presidential aspirant. He, thereby, proposes to do the right thing. Now follows the second requirement: to show that he knows how to do the thing right.

We make multi-billion dollar infrastructure decisions based on a labor law written in 1921.President Obama proposes making rules on the Internet using laws written in the 1930s. We regulate global airlines using laws written for railroads. Our immigration laws were written a half-century ago.

Governmental policy seems frozen, incapable and fearful of change. It is in the way. And we deserve better than this.

Soon we shall learn whether Jeb Bush will offer a “mix of smart policies and reforms” to couple with his vision and “can do” spirit. If he does this well Bush will grow even stronger.

Jeb Bush entered the presidential primary cycle impressively. Bush, after long diffidence, in January credibly declared that he would raise $100M in the first quarter of 2015. Nobody doubted him. That promptly persuaded the nominal frontrunner Mitt Romney to exit the field.

Money, as Big Daddy Unruh once memorably phrased it, is “the mother’s milk of politics.” Bush’s impressive declaration also was a preemptive strike at — and might prove to have been an existential blow to — his other GOP Establishment rival, New Jersey Gov. Chris Christie. Conjoin Bush’s preemption with Christie’s terrible, horrible, no good, very bad week and Bush looks like he dominates the establishment (money, party, and official) wing of the GOP.

Meanwhile Hillary Clinton, apparently having defused the threat of a Sen. Elizabeth Warren insurgency, now is pocketing the Democratic Party’s nomination. To her existing assets — popularity, campaign donors, media appeal, résumé and personal dignity — Clinton is adding much of the cream of her party’s operative class. There is a rising probability of 2016 being Bush vs. Clinton 2.0.

That said, Jeb Bush, unlike Hillary Rodham Clinton, does not yet have his party’s nomination locked up. He has not yet won over many outspoken members of the conservative base and he has rivals. There are contenders, some dear to the base, who could prove formidable especially in the early contests in Iowa, New Hampshire, and South Carolina. If Bush were to stumble too hard in early contests his great theme, formidable entrance, and big war chest might not be enough to carry him through to nomination ... and election.

Among Bush’s formidable rivals are Sen. Rand Paul (with exceptionally deep roots in Silicon Valley, the enclave that proved yeast-like early money to the obscure Sen. Barack Obama’s presidential run). There is Sen. Marco Rubio. Rubio bolted back to national attention with Charles Krauthammer’s betting on him as the “underestimated dark horse candidate who threads his way, young, energetic. He’s got a program….” and then led the straw poll among donors at the recent “Koch $889M” gathering.

Surging, now, is Gov. Scott Walker, whose anti-union fervor makes him a force with which to be reckoned in the base. Reappearing, too, is Gov. Rick Perry whose tenure as Texas governor propelled the Lone Star State to the top of the economic charts and onto the cover of Time Magazine as a resounding success story for job growth and economic mobility. The admirable Dr. Ben Carson now suggests he likely will form an exploratory committee this month. Tea Party Darling Sen. Ted Cruz inches closer to a declaration of candidacy.

Much, then, hangs on whether Bush “gets” it. Bush really seems to have a full grasp of the dynamism of the American Way. As Bush said in Detroit:

In 1955, 60 years ago, the Fortune 500 list first appeared. Of the companies on that list, fully 88% don’t even exist today or have fallen away. Today’s Fortune 500 will be replaced by new companies that are just starting today.

The “right to rise” indeed is fundamental to America, to American voters, and, thus, to presidential politics. Extolling and encouraging the right to rise Jeb Bush makes a grand entrance.