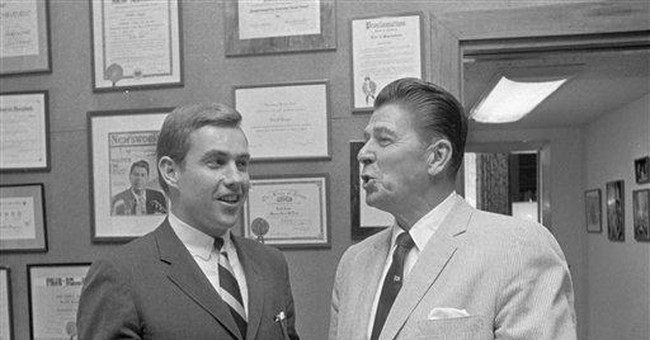 Last week, much of the living inner circle of Rep. Jack Kemp’s brain trust convened, on Capitol Hill, to observe the 30th anniversary of Kemp’s introduction of the Gold Standard Act of 1984. The Jack Kemp Foundation President Jimmy Kemp considers the gold standard the most important unfinished element of his father’s policy agenda. Enactment, in the opinion of this columnist and others, would unleash a tsunami of equitable prosperity on America and the world.

The Jack Kemp Foundation, in association with American Principles in Action (which this writer serves as Senior Advisor, Economics), presented a Kemp Forum on Growth. Also presenting were key Kemp inner circle figures of the heyday of the Supply Side: Dave Hoppe, who served as Rep. Kemp’s chief of staff; John Mueller, Economic Counsel to the House Republican Conference of which Kemp was chair; Jeffrey Bell, national co-chairman of Kemp’s 1988 presidential campaign, and campaigning, primarily on the gold standard, as the Republican nominee for US Senate from New Jersey. The Forum was moderated by this columnist, back then a very junior Kemp associate, founder of the Prosperity Caucus.

Will a new political leader pick up the opportunity to reintroduce Kemp’s legislation and complete Kemp’s magnum opus … putting America, and the world, back on the fast track to sizzling economic growth? It’s an appealing opportunity. Many — Republican and Democrat — who supported the original Kemp supply side agenda politically flourished. Most notably the Kemp growth formula of lower tax rates and good, rather than easy, money proved crucial to propelling Ronald Reagan to the presidency … and, then, to a landslide re-election by a prospering America.

When Reagan first began his 1980 campaign the Dow was bouncing around (even well below) 1,000. Reagan, inspired by Kemp, put the Dow on a course to rise by an order of magnitude.

And much more. Kemp’s policy formula, under Reagan and Clinton, created close to 40 million jobs.

The “good money” aspect of the Kemp formula has decayed, far more seriously than have his tax rate cuts. With “easy” — which is to say, decayed — money, America has suffered economic stagnation for well over a decade. By putting monetary policy back on track America can resume its historic course of growing equitable prosperity — without prices creeping up and putting a big, if semi-obscured, squeeze on workers.

Kemp, posthumously, again offers us the key to stupendous growth.

The Gold Standard Act of 1984 was, in structure, designed by Reagan Gold Commissioner Lewis E. Lehrman (founder and chairman of the Lehrman Institute with which this columnist has a professional association), and by Lehrman protégé John Mueller. In Kemp’s accompanying remarks in the Congressional record he inserted in the record a Lehrman op-ed published that very day. Kemp: “Today’s Wall Street Journalcontains an excellent article by my friend Lew Lehrman on why we must restore a modernized gold standard and I commend this fine article to my colleagues.”

The Gold Standard Act was co-sponsored by (then) Reps. Newt Gingrich, Connie Mack, and Vin Weber, among others. This legislation remains as, or more, relevant and potent today. The legislation could be reintroduced almost verbatim.

While Kemp politically quarterbacked the historic cutting of marginal tax rates, good money was delegated to Fed Chairman Paul Volcker. Volcker used initially punitive, but effective, high interest rates to slay the inflation dragon then terrorizing America. He is on record as using a “rule or indicator” rather than discretion.

Some thinkers believe (although he has never implied) that Volcker may have used the gold price as the, or an, “indicator.” As William L. Silber, Marcus Nadler professor of finance and economics and director of the L. Glucksman Institute for Research in Securities Markets at New York University’s Stern School of Business observed, in 2012, at Bloomberg.com, “Volcker wanted to restore the gold standard without gold.”

Volcker is not a gold standard proponent. That said, in his Foreword to Marjorie Deane and Robert Pringle’s The Central Banks (Hamish Hamilton, 1994) Volcker observed: “It is a sobering fact that the prominence of central banks in this century has coincided with a general tendency towards more inflation, not less. By and large, if the overriding objective is price stability, we did better with the nineteenth-century gold standard and passive central banks, with currency boards, or even with ‘free banking.’ The truly unique power of a central bank, after all, is the power to create money, and ultimately the power to create is the power to destroy.”

Why, then, use real gold? It “will be the foundation for a new era of global prosperity,” says Dr. Arthur B. Laffer, recently, in his praise for Steve Forbes and Elizabeth Ames’s important new book Money: How the Destruction of the Dollar Threatens the Global Economy—and What We Can Do About It.

Persuading Reagan to embrace his agenda, Kemp served as the prime mover in reducing, in stages, the top marginal income tax rate from 70% (President Kennedy posthumously having reduced it from 91%) to 28%. And indeed a rising tide lifted all boats. The Kennedy, and then Reagan, tax rate cuts, in the context of good money, created millions of good new jobs.

Kemp was as committed to good money as he was to lower tax rates. Volcker and his successor, Alan Greenspan in his early terms as Fed chairman, conducted a monetary policy that became known as “the great moderation.” It correlates reasonably closely with the Reagan-Clinton era of equitable prosperity.

That said, America and the world thrives best under the “rule of law, not of men.” While Kemp was crusading for lower tax rates good money was instituted via proxy. But good money was not institutionalized and now it has decayed.

Hence, an opportunity now exists for an aspiring political leader to replace our stagnation-inducing “easy money” policy with a prosperity-producing “good money” policy. And the gold standard is the “gold standard” of good money.

How to do it? Kemp’s legislation sets the basic formula forth in fewer words than the Gettysburg Address:

Not later than one year after the date of the enactment of this Act, the Secretary of the Treasury shall establish a permanent definition of the dollar, as expressed as a fixed weight of gold, nine-tenths fine.

The dollar defined as such fixed weight of gold shall be the standard and unit of value of the United States, and all forms of money issued or coined by the United States shall be maintained as a parity of value with this standard.

Such redemptions shall be made either in gold coins or in an equivalent value of gold bullion.

The Secretary of the Treasury shall cause gold coins to be minted in such weights, denominations, and forms as the Secretary determines will best serve the maintenance of gold payments and the needs of commerce.

Coins minted under this section shall be legal tender for all debts, public charges, taxes and dues.

The heart of the classical gold standard was, is, and always shall be, the definition of the currency as a fixed weight in gold, legally convertible thereto. And as Forbes.com’s own Nathan Lewis has pointed out, “the correlation between the gold standard and stupendous growth is clear.”

June 2014 presents a Grand Conjunction of important decennial anniversaries. It is the 100th anniversary of the assassination of Archduke Ferdinand, precipitating World War I, which destroyed the gold standard and plunged the world into nearly a century of war without limit: World Wars I and II, the Cold War, and the War on Terror.

June 2014 is the 70th anniversary of D-Day (in which this writer’s late father, Max Benko, heroically fought). D-Day would bring about Allied victory in World War II.

Now, with world peace finally beginning to dawn, it finally becomes practical to restore the gold standard (always an early victim of Big War). That makes the 30th anniversary of Jack Kemp’s Gold Standard Act of 1984 the most important element of this Grand Conjunction.

It is time for the re-introduction and enactment of Kemp’s magnum opus with a Gold Standard Act of 2014. It is time thereby to unleash a new epoch of stupendous growth.