The first week of November 2016 ended with a whimper, even though the S&P 500 fell for the ninth consecutive day - something it hasn't done since 1980! (See our post from last Friday, "Will the S&P 500 Make It 9 Losing Days in a Row?", for more on our thoughts on the likelihood of such an event and also a tool you can use to find out how likely 10 down days in a row might be!)

We were also two-thirds right in our prediction from the end of Week 4 of October 2016, where we wrote that:

In the absence of other such noise events, or more fundamental factors that could seriously influence stock prices, we can reasonably expect stock prices in the near future to converge with the trajectory we sketched on the chart above. After that happens, stock prices will more likely than not resume their generally downward trajectory, although the only thing we would really expect is that they fall somewhere within the shaded range we've indicated on the chart above. 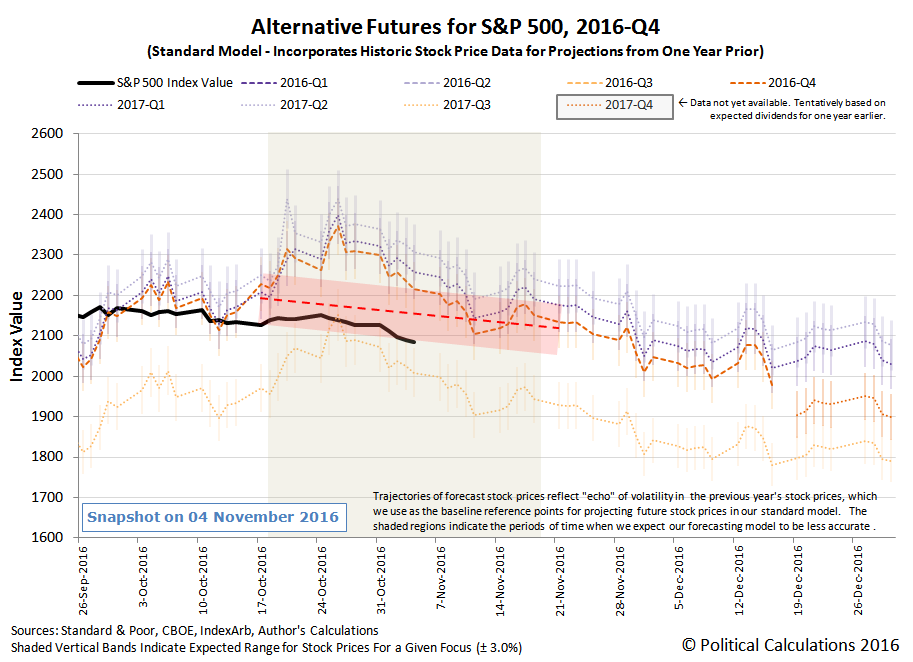 The two of three parts we got right:

The part we got wrong is that stock prices just ever so slightly dropped out of the red-shaded range we indicated on the chart on Thursday and Friday of Week 1 of November 2016, which if we had been more deliberate in drawing it three weeks ago, we would have drawn to be slightly wider so that it extended 3% above the red dashed line and 3% below it - just like all the other ranges about the alternative trajectories we showed on the chart....

Still, our policy is that near-misses are still misses, as we're neither playing horseshoes or the slots at Vegas!

Halfway through our hand-drawn forecasting experiment, the actual trajectory of the S&P 500 is running to the low side of our forecast range, which we think will continue in the absence of a noise event (there's an election in the U.S. sometime in this next week, right?) or a more fundamental change in the expectations for the future with respect to the S&P 500's dividends.

Until next week, here are the headlines we made special note of during the first week of November 2016.

Elsewhere, Barry Ritholtz categorized the week's economic and market news into its positives and negatives.

They're Under Attack: Four Cops Shot During St. Louis George Floyd Protest, But They're Not The Only Victims