In less than a week, the deadline for filing for 2013's federal income taxes will be upon us. That makes this a very good time to find out how many pages it takes to explain the U.S. federal tax code!

Our source for this data is the Wolters Kluwer CCH Standard Tax Reporter, which has updated their data through the 2013 tax year: 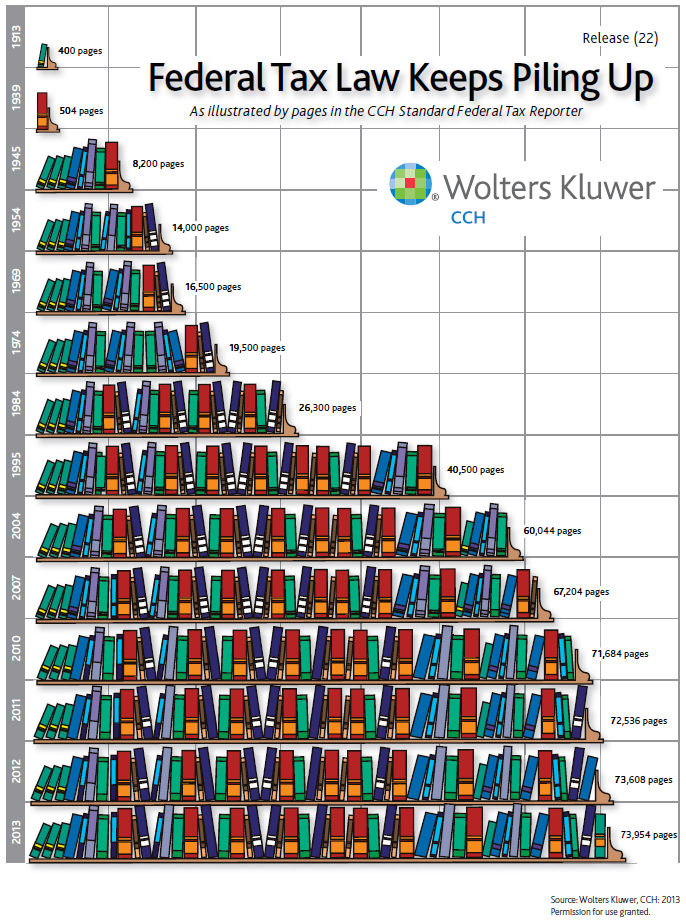 We find that for those filing their personal income taxes on 15 April 2014, they must comply with the terms of a tax code that takes 73,954 pages to explain. To tax professionals.

In President Obama's first two years in office, when his political party also controlled both the U.S. House of Representatives and the U.S. Senate and used its control to impose massive new taxes on the American people like the Patient Protection and Affordable Care Act, the U.S. tax code grew to be 71,684 pages long, which works out to be an average exponential rate of 3.0% per year.

If it had been allowed to continue growing at that rate, the U.S. tax code would effectively double in length every 24 years.

After 2010 however, the Democratic Party lost control of the U.S. House of Representatives, with one of the outcomes of that loss being that the U.S. federal tax code has grown much more slowly in all the years since.

From 2010 to 2013, we find that the growth of the U.S. federal tax code has decelerated to grow at just a third of the rate that it did when the Democratic Party controlled the U.S. Congress and the White House. The tax code has grown at an exponential rate of just 1.0% per year since 2010, a pace that would have it double in size every 72 years.

Altogether, the U.S. federal tax code has grown at an average exponential rate of 1.8% per year since 2008.