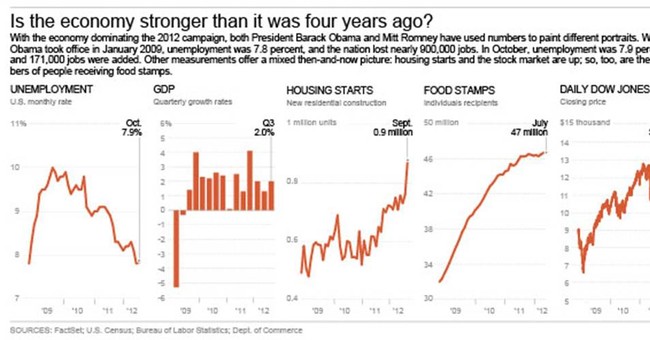 Oh no! The government isn't reporting any economic data!

That's something that might stymie a lesser economist, but we're not going to let a lame government shut down stop us!

That's why today, we're going to do the job that the furloughed employees of the Bureau of Economic Analysis won't be doing this month, unless the partial government shutdown ends really soon and they crank out a rush job. We're going to estimate what the United States' Gross Domestic Product will be for the just completed third quarter of 2013.

After all, we've previously found that it takes maybe as many as 2.5 economists in the private sector to do the same job that it takes 16 government economists to do, so just how hard could it be?

Technically, we're going to forecast it, but then, since it takes the BEA three attempts before they finally get close to a good number, forecast values for GDP are probably just as good as an official government estimated one.

Let's do this visually, so you can get a sense of where we came up with our estimate of GDP for 2013-Q3. Our first chart is one based on math that we have been developing to quantify and visualize the impact of changes in government spending, taxes and the Fed's quantitative easing programs upon the U.S. economy, but which we'll now use to project what nominal GDP will be reported to be for the third quarter of 2013: 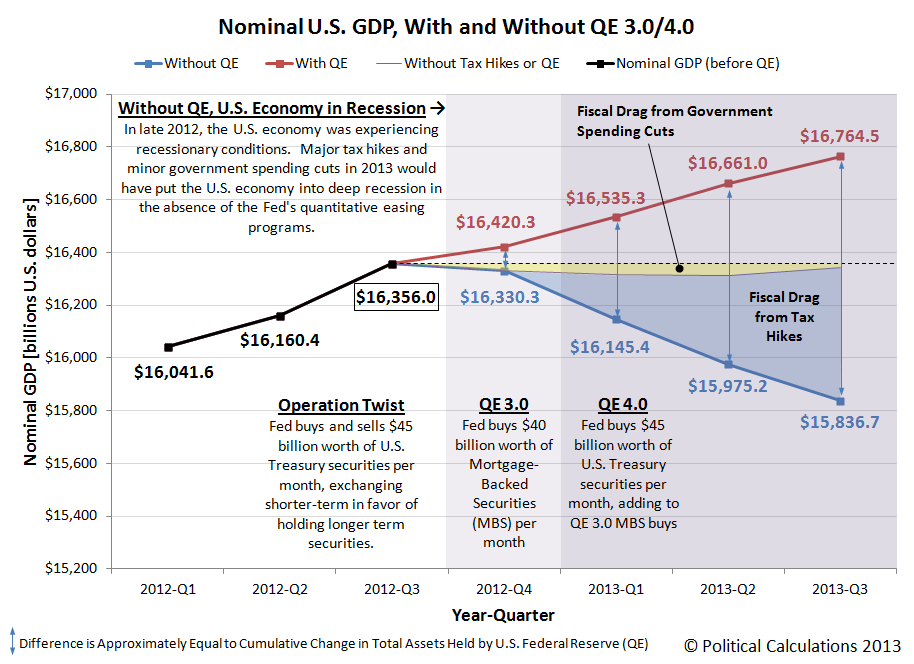 The first two quantities are pretty locked in at this point and won't likely be subject to future adjustment. The wild card in our forecast is the amount of government spending in the U.S., which consists of spending at the federal government level, as well as at the state and local level, for which we won't likely have a good estimate until late December 2013. Assuming that the BEA's data jocks get back on the job before then.

To get around that limitation, we went over data recorded from 1960 through 2012 to determine that average change in spending for both Federal and State & Local governments from the second quarter of each year to the third quarter to determine our estimate for this year. And you want to know the crazy thing about that? Even though the BEA shut down the computer system that reports historic data as part of their effort to completely flummox lesser economists, we didn't need to use their stinking site to get the historic GDP data on government spending at all.

Speaking of which, that value isn't something that would be impacted at all by the partial U.S. federal government shut down, which didn't begin until 1 October 2013, which is part of the fourth quarter of 2013.

Another factor we need to consider from better, private sector sources of information about the relative health of the U.S. economy is the possible return of organic economic growth, following the year-long microrecession experienced by the private sector of the U.S. economy from July 2012 through July 2013, which may have added a positive contribution to the GDP number. Since those conditions would appear to have resumed somewhat in September 2013 however, we think that contribution will be small, with the actual value likely to be reported to be very close to our forecast nominal GDP number.

As for real GDP, our inertial forecasting methods aren't quite as precise as they would seem to be for nominal GDP. Here, outside of periods where the U.S. economy has turned the corner from expansion to contraction, or vice versa, historical back-testing puts us within 2% of the value the BEA reports about 95% of the time, and within 1% of it almost 75% of the time.

Our second chart shows our projected value for real GDP in 2013-Q3: 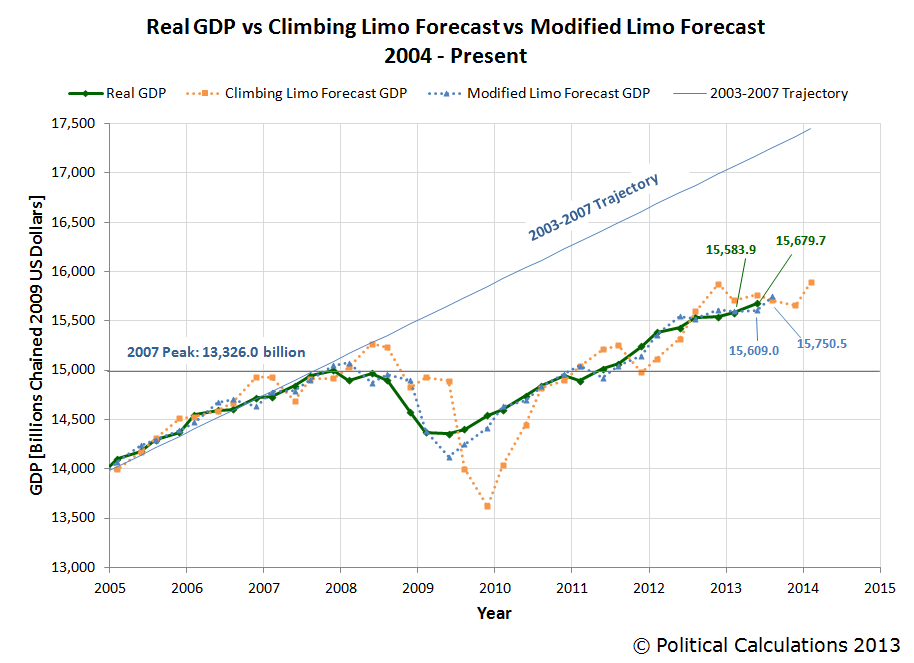 By definition, it has a 50% probability of being above the midpoint of our forecast range, $15,709 billion. We think that given the relative increase in government spending from 2013-Q2 to 2013-Q3, combined with the positive contribution of organic economic growth, that real GDP in the third quarter of 2013 will indeed be reported to be above that level.

And there you have it - a simple blog just replaced the topline work of the Bureau of Economic Analysis for the third quarter of 2013 using just a handful of data points. We'd actually rather they be able to doing the job themselves, since the full extent of the data collection and reporting that they do is something that does have real world value, but we can't help but think that there ought to be a private sector alternative available to fully pick up the slack during times like these.