Today, we're taking a preliminary look at just who owns all the debt issued by the U.S. federal government through 30 September 2012 - the end of the U.S. government's fiscal year. Our chart below visualizes what we found.

The information presented in our chart above is preliminary, as the U.S. Treasury typically revises its foreign entity debt ownership data in March of each year.

Overall, U.S. entities own just 65.8% of all debt issued by the U.S. federal government. Ranking the major U.S. entities from low to high, we find that: 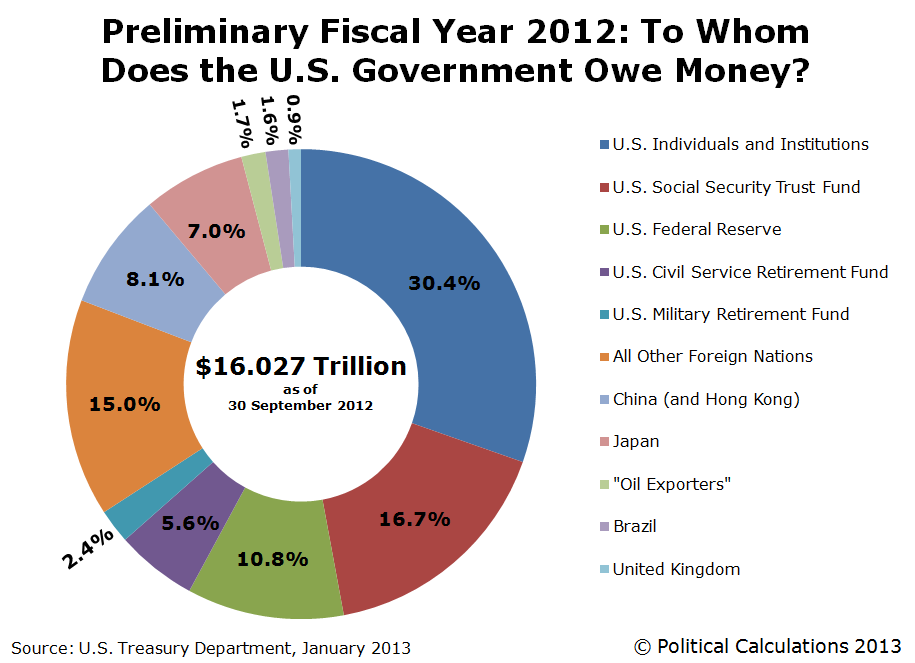 Meanwhile, foreign entities own 34.2% of all U.S. government-issued debt, with the following nations' individuals and institutions representing the five biggest holders of that debt, again ranked from low to high:

All other nations hold approximately 15% of the U.S. outstanding national debt.

The Role of Quantitative Easing in Offsetting Foreign Ownership of the U.S. National Debt

The Federal Reserve's various quantitative easing programs of recent years, where the U.S. government-chartered central bank has purchased large quantities of U.S. government-issued debt in its attempts to keep the U.S. government's spending elevated and the U.S. economy stimulated by lowering long-term interest rates, are especially interesting in the degree to which they've succeeded in offsetting the share of the U.S. national debt owned by foreign interests.

The Fed also boosted its holdings of other federal agency debt securities from $48 billion on 18 March 2009 to a peak value of $169 billion on 10 March 2010, which has slowly declined to $83 billion as of 26 September 2012. All told, the Federal Reserve held an additional $1.21 trillion of the U.S. national debt compared to what it did before it began its quantitative easing programs.

As it stands, a little over 1 out of every 3 dollars borrowed by the U.S. federal government is now owned by foreign interests.