Previously, we advanced two possible hypotheses that might explain what is currently happening with the number of seasonally-adjusted initial unemployment insurance claim applications being filed in the U.S. each week:

In that post, we indicated that we might not know which hypothesis was correct until sometime this summer. But that was before the U.S. Bureau of Labor Statistics released its initial estimate of the number of new jobless benefit claim filings on Thursday, 26 April 2012. Now, it is very possible we might know the answer as early as this upcoming Thursday, 3 May 2012.

We've updated both charts showing our two hypotheses to incorporate the data as it stands as of the BLS' 26 April 2012 report. The first chart illustrates our first hypothesis: 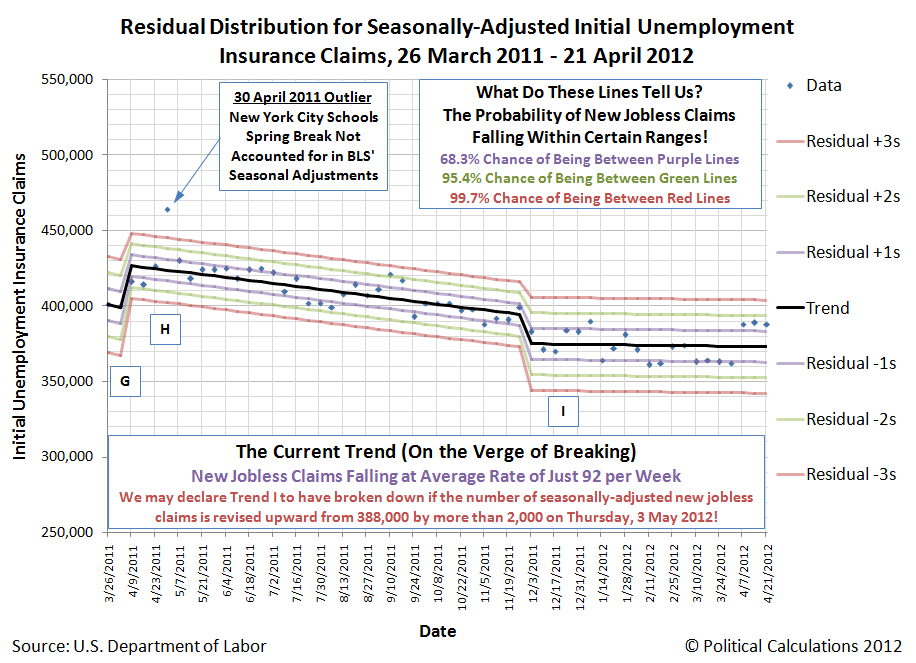 In this chart, we would seem to be realizing our first hypothesis, in that the indicated trend, which we've identified as Trend I, is in the process of flatlining.

Now take a closer look. Focusing in on the data from 4 February 2012 through 31 March 2012, we see that the mean trend line for all data reported since 3 December 2011 has shifted in the past week so that all but one of these data points are below the line.

Following the well-established rules developed by Western Electric over half a century ago to determine whether or not an existing trend has broken down after having been in statistical equilibrium, which are visually depicted in the bell-curve image (it's not there for decoration!), we find that all it would take for us to declare this hypothesis to be false is for the most recent data, for the week ending 21 April 2012, to be revised upward by more that 2,000 claims, as the resulting change in the mean trend line will place the data for these nine consecutive weeks below it.

If the BLS keeps to its recent track record, it will definitely be revising the number of new jobless claims recorded for the week ending 21 April 2012 upward when it revises its data for that week this Thursday, 3 May 2012 - the only question is by how much.

Our second chart shows what the new trend would look like at this point in time: This Thursday, our two hypotheses regarding the current trend in new jobless benefit claim filings will enter the theoretical Thunderdome, and very possibly, only one will leave. Stay tuned!