Previously, we investigated why small businesses haven't been creating jobs during the so-called economic recovery following the recession that began in December 2007. We found that their collective debt situation is the likely culprit keeping them from adding jobs to the U.S. economy.

But what about big businesses? What have they been doing since the recession officially ended in June 2009?

Would you believe that they've been the ones doing the hiring? Here's what polling agency Gallup found in their survey of major employers last November:

That's a significant statement, because following the two previous recessions, small businesses led the way in adding new jobs to the U.S. economy, while big businesses more or less sat on the sidelines.

But today, things are different. In a somewhat confused April 2011 article asking why the biggest U.S. companies aren't hiring, USA Today's Matt Krantz perhaps unknowingly reported that yes, in fact they were:

Large companies aren't typically big engines of job growth, but they are the largest employers. Small businesses with fewer than 100 employees typically account for two-thirds of jobs created in a recovery.

And so we confirm that more than half of the biggest businesses in the U.S. did in fact add jobs between 2009 and 2010.

But why? Weren't big businesses just as affected by the economic downturn as small businesses?

As we're about to show, perhaps not. The following chart reveals what we found when we calculated the debt-to-equity ratio for U.S. nonfarm, nonfinancial corporations (aka "big business") using data from the Federal Reserve: 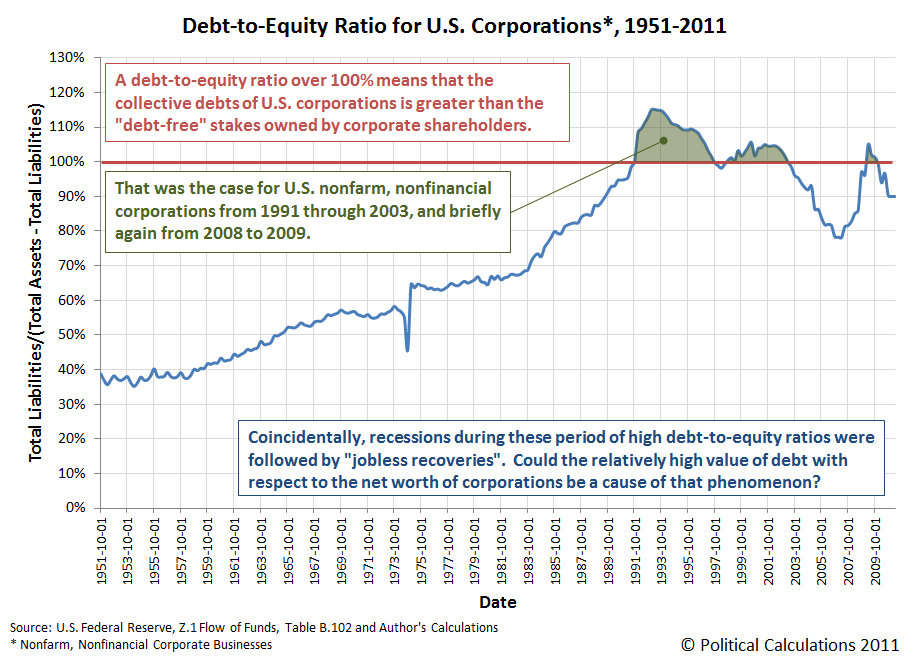 According to the National Bureau of Economic Research, the first of the last two recessions officially ran from July 1990 through March 1991, while the second ran from March 2001 through November 2001.

During both these recessions, the debt-to-equity ratio for U.S. nonfarm, nonfinancial corporations exceeded 100%. But that ratio only briefly surged about the 100% level in 2008, before falling back to today's level of around 90%.

That's significant, because as we saw with small businesses, excessive debt levels force business owners to focus on building up equity and reducing debt, neither of which can be rapidly achieved by hiring more people.

With big business having brought its debt levels below the 100% mark before the recession, and reclaiming that level in the months following the recession, these companies have been better positioned to add to their workforces. And so they have, although with their debt-to-equity ratios still awfully close to the dreaded 100% line, they've been slow to do so.

So if you want to know what's holding back the nation's employers from going on a full-bore hiring spree, it's definitely debt. Krantz quotes James Grant of Grant's Interest Rate Observer for the bottom line:

Still, lackluster hiring by the nation's largest employers is emblematic of an aftereffect of the overborrowing binge that triggered the recession, says James Grant of Grant's Interest Rate Observer.

"This recovery is different in that it was preceded by a terrific debt trauma," he says. "The country is in the business of paying on debts or defaulting on them, and the burden of debt has weighed on growth in hiring."

Indeed. If only the debtors received the bailout money and stimulus cash the politicians wildly gave away to the big banks/unions/Wall Street/green energy/Democratic Party donors instead in 2008-2009, and used it to pay down their debts or invest in equity to reduce their debt-to-equity ratios, we might have a decent economic recovery underway right now.

Board of Governors of the Federal Reserve System. Z.1 Flow of Funds Accounts of the United States. B.102 Balance Sheet of Nonfarm Nonfinancial Corporate Business. Accessed 4 October 2011.