Trump Is Right About Mismanagement In Puerto Rico, And Congress Should Back His Reform Plan 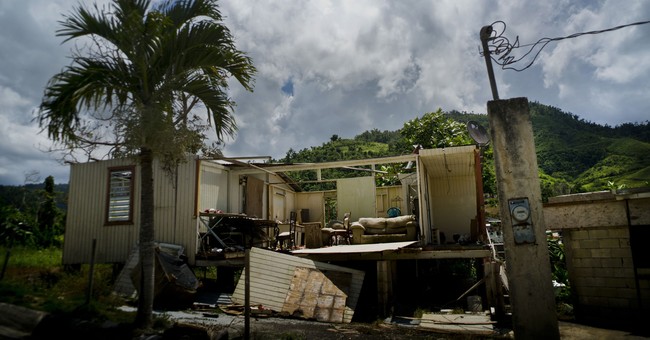 It’s not been clear how best to help Puerto Rico, still dealing with the aftermath of the hurricane that struck the island with such ferocity, without adding to the culture of dependency that has defined so much of its relations with the mainland for so many years.

In mid-June, President Donald Trump resubmitted to the Senate for the purposes of reconfirmation the names of the seven people currently members of Puerto Rico’s Financial Oversight and Management Board. These nominations are expected to go through the regular committee process, meaning its members – who thus far have been less than successful in righting the financial ship – may be grilled on what they intend to do if reconfirmed.

The mismanagement that has been endemic to Puerto Rico’s public finances over the last several decades has produced over a hundred billion dollars in debt and unfunded liabilities. The legacy of broken promises, poor services, and dilapidated infrastructure has been just as harmful as the storms that wrecked it. Financial constraint, debt reduction, and structural reforms must occur if things are to change and both Gov. Ricardo Rossello and the Financial Oversight and Management Board must lead the way. Past politicians had their chances acting as though things continued to be business as usual, they blew it.

One of the most significant impediments to the revitalization of its economy has been the dysfunctionality of the electric sector. PREPA, the Puerto Rico Electric Power Authority, has amassed $9 billion in debt over the past several decades.

This imposes real costs – in lives as well as lost commerce. It must be addressed but, thanks to political considerations deriving out of fear of disenfranchising the powerful government employee unions that hold so much power on the island, efforts to do so have gone fallow. Up to now.

On the table for consideration is the May 3, 2019 Definitive Restructuring Support Agreement through which PREPA and its creditors could restructure much of the utility’s legacy debt. The agreement provides for the recovery of a portion of the debt over the next several decades and set the stage for the transformation of Puerto Rico’s electric power sector into a modern, efficient, sustainable model.

If there is ever to be a revitalization of Puerto Rico’s economy as a whole, the agreement needs to be approved. The RSA provides for contributions from all stakeholders, including PREPA, its creditors and customers, to the resolution of PREPA’s legacy debt obligations.

Whether it will or not depends to some degree on what the Financial Control Board, which is a signatory to it, intends to do to make sure it is enforced once its members are reconfirmed to their posts by the U.S. Senate.

It has broad support in addition to the control board. The Puerto Rico Electric Power Authority, the Puerto Rico Fiscal Agency and Financial Advisory Authority, an Ad Hoc Group of PREPA Bondholders and a municipal bond insurer, Assured Guaranty Corp., have all already signed up. Additional bondholders and insurers are being given the opportunity to do so as well.

They should because it makes sense. It says holders of outstanding PREPA bonds will exchange what they have for two types of new Securitization Bonds issued by a special purpose vehicle. The Tranche A Bonds, which reach maturity after 40 years, have approximately 67.5 percent of the value of the existing PREPA bonds. The Tranche B Bonds will be growth instruments linked to Puerto Rico’s economic recovery, with repayment contingent on the demand for electricity over time and repayment of the Tranche A Bonds.

Under the agreement, debt service payments on the new bonds will be backed by a fixed transition charge, subject to a predetermined maximum, that will not vary with fluctuations in electricity sales.  In the early years, the Transition Charge will remain relatively low in order to provide time for the expected efficiencies and upgrades to the electric system to be realized, thus offsetting a portion of the Transition Charge as it increases over time. The RSA includes “demand protection” provisions that provide bondholders reasonable assurances that the Transition Charges will be paid and will generate the projected revenues.

Everyone who has agreed to the RSA has agreed to accept meaningful reductions in their claims in the interest of reducing uncertainty and enabling PREPA to emerge from court protection.  For its part, the Government of Puerto Rico will eliminate the risk of litigation that could result in greater recoveries to creditors and correspondingly greater costs to Puerto Rico electricity consumers.

The deal has its critics. Some say the transaction charge is too high. Others don’t like the percentage valuation of the new bonds compared to what their original holdings were worth. Still, this agreement, which is the result of complex compromise, is the product of months of negotiations that included every party involved to give up things in exchange for what is best for the Puerto Rican people who, some people need to be reminded, are citizens of the United States. The reasonable consensus reached by all parties to deal with the legacy costs of Puerto Rico’s electric infrastructure paves the wave to keep the lights on all over the island. It is a good, and necessary, first step in a journey that is critically important to Puerto Rico’s future prosperity.