Biden’s Budget Would Beget The Italian Republic Of America 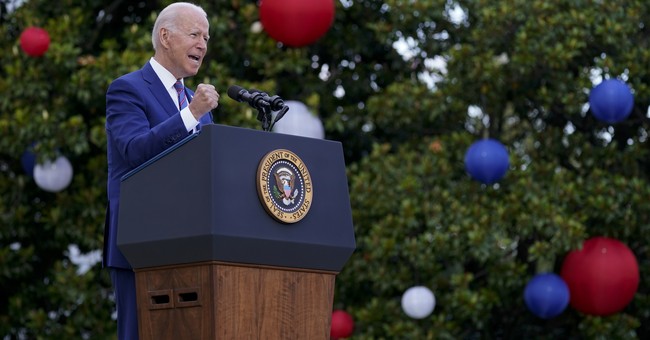 Joe Biden ran on a platform to Build Back Better—strengthen the American economy at home to better compete internationally and accomplish a better measure of equality and racial justice. Sadly, his budget appears to embrace the Italian playbook—excessive borrowing to buy off the progressive movement.

He wants to boost government spending by one-third from pre-COVID levels. He targets infrastructure, industrial policies, education, family-oriented programs and government administration, but his agenda would worsen the economic performance by imposing unions and burdensome regulations.

Not much bang for a trillion bucks

Despite devoting more than $1.3 trillion to investments in roads, rails, the internet and training, the Biden budget projects annual growth of less than 1.9% after the jolt from COVID stimulus spending wears off.

In the bipartisan negotiations to craft a limited infrastructure package, no one seems to be asking why spend so much more when the current system is so moribund and inefficient?

On approximately the same timeline, the cost of adding a new station to the New York City subway system is three times that of London or Paris. The Davis-Bacon Act, which effectively requires union wage rates and work rules on federally assisted projects, adds an estimated 20% to infrastructure construction costs overall.

Biden plans to spend more on high-tech—chip design and foundries, electric vehicles and green technologies. That’s absolutely necessary to meet challenges from China and our allies, but this is to be funded with draconian taxes on capital formation and even tougher unionization rules.

The Protecting the Right To Organize Act would nullify state right-to-work laws and impose card check—unions could get recognized without representation elections by simply collecting signatures. The proposed law would prohibit employers from making their case to employees during unionization campaigns, but organizers could educate workers as they pleased.

With all their resources, why did Toyota TM, -0.75% run circles around GM GM, -0.09% and Ford F, -0.11% on hybrid vehicles? And why is Tesla TSLA, 0.06% now teaching them what is possible with electric vehicles? It seems you can make exciting, innovative cars in North America or you can make cars with the UAW, but cumbersome work rules and the impact of unions on company cultures make it tough to do both.

Biden’s infrastructure plan is laced with special social-justice provisions. Many stand a decent chance of getting struck down in court. However, those are so pervasive they could take years to root out and challenge while imposing costly overhead and inefficiencies on business.

The Biden budget shortchanges defense—downscaling its share of slow-growing gross domestic product—when China offers new challenges in the Pacific and our military requires radical modernization and improvement. And its bulging deficits put the dollar’s BUXX, -0.15% status as the global reserve currency and America’s standing as global economic leader in great peril.

The budget projects that the national debt held by the public will grow to 117% of GDP in 2028 by assuming that inflation levels off to reasonably acceptable 2.3% annually, the 10-year Treasury rate TMUBMUSD10Y, 1.303% never rises above 2.8%—the 25-year pre-COVID average was 3.8%—and unemployment falls to 3.8%.

The days of importing cheap labor through Chinese products are waning. A tighter U.S. labor market will impose more inflationary pressures. Higher interest rates are inevitable from the Fed tightening or investors simply demanding higher rates to compensate for inflation. Either way, interest payments on the national debt will be much greater than the Biden budget projects.

Many of the taxes Biden proposes are nonstarters even among Democratic constituents. For example, higher capital-gains taxes, coupled with ending step-up valuations at death and estate taxes would imperil many moderate-sized businesses such as car dealerships, construction companies and minority consulting companies.

The Biden budget does not address the Social Security trust fund running out of cash by 2031, and the negative impacts on growth of new taxes to fix it.

The president’s budget projects long-term annual deficits of $1.3 trillion, but the above-mentioned factors imply something closer to $2 trillion. And a national debt held by the public reaching between Italy’s pre-COVID 135% and postcrisis 160%.

Italy essentially gets along by borrowing from Germany and other more fiscally sound economies. With a much larger population, the United States would have to look to China for a godfather.

Share this on Facebook
Tweet
DeSantis Blasts Biden: 'Why Don’t You Do Your Job?'
Katie Pavlich|
Biden's Approval Down in Yet Another Poll
Rebecca Downs|
To No One's Surprise, COVID Has Returned to Wuhan...And It's Not the First Time
Matt Vespa|
Psaki Again Blames Republicans for Crime Wave While Defending ATF Nominee Chipman
Spencer Brown|
This Swing District Democrat Has an Uncomfortable Connection to Group Promoting Critical Race Theory
Rebecca Downs|
Clown Town: COVID Experts Get Buckshot to the Face Over Latest Advice About Wearing Masks at Home
Matt Vespa|