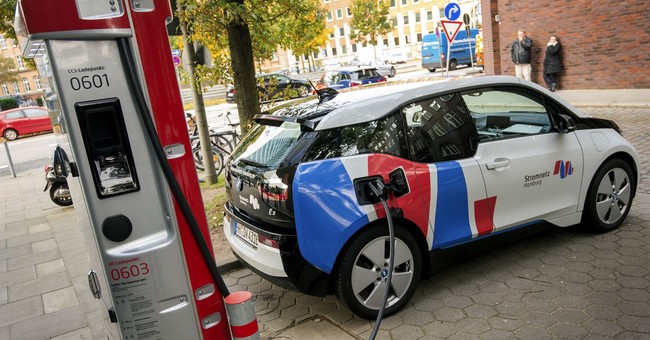 Cars and trucks account for about half of the U.S. petroleum consumed. Joe Biden aims to slash carbon emissions by focusing federal procurement on electric autos to accelerate battery development and creating a national network of 500,000 charging stations.

His proposals are more palatable than those of candidates embracing Rep. Alexandria Ocasio-Cortez’s Green New Deal and are likely where public policy is headed.

Even if a more extreme Democrat captures the presidency, he or she will have to persuade some Republicans to reach the 60 votes to pass major legislation in the Senate. Compromise could put America on a track to match Chinese and European initiatives to put more electric vehicles on the road but I doubt any American city will aim to be all-electric like Amsterdam.

If President Donald Trump wins, most voters still will want something done about Climate Change, and any infrastructure package, needing Democratic support, will require movement in Biden’s direction.

Electric cars predate gas-powered vehicles by 50 years, and were sold commercially through the 1930s. The slow progress of battery technology permitted the internal-combustion engine to outperform in terms of power, cost and recovery time, and it became dominant.

Even with limited range and unacceptable recovery times for intercity trips, power packs account for 35% to 50% of current vehicle costs, and selling economically viable numbers of electrics without a generous subsidy or government zero-emissions mandate is proving challenging.

Contemporary batteries combine expensive cobalt, lithium, manganese and nickel. To increase capacity, engineers are tinkering with boosting nickel content but it can get extremely hot and cause fires.

Engineers have grappled with battery problems for more than a century, and this may be the old story of the man repeatedly walking halfway to the wall but never reaching his goal. The theoretic limits of battery chemistry may put a durable, inexpensive battery that can power a decent size SUV 400 miles and recover quickly beyond reach.

Most daily commutes and errands are less than 100 miles and plug-in hybrids with modest batteries would eliminate gasoline for workdays and most weekends.

The first auto makers who built profitable, durable businesses were not the carriage makers they displaced, and batteries and electric motors are not among the strategic competencies of auto makers.

Vehicle manufacturers will be consumers and assemblers of the core components, and auto makers are banking on self-driving vehicles to create revenue streams, for example from continuous software updates, to remain relevant and bolster bottom lines.

The dominant attraction of autonomous drive is safety — reducing human error — and enabling car services like Uber UBER, -0.06%   to become profitable by replacing drivers with remote operators who manage fleets of vehicles.

At a fraction of the cost of fully autonomous drive vehicles, advanced driver assistance programs like automatic emergency braking, which utilizes camera-object recognition, radar-laser detection and the like, will be in nearly all new cars soon. AEB will reduce rear-end crashes, injuries and property damage by 80%.

Taking the automobile the rest of way to fully autonomous drive — and without breakdowns common for today’s auto dashboards — will cost many multiples of AEB and similar systems with only small added safety gains.

Recently, I took Uber 2.2 miles from the Lincoln Center to a restaurant on Second Avenue. The fare was $17.08 and Mayor Bill de Blasio took $4.21 in various fees and taxes, leaving $12.87 for the driver, gas and depreciation of the vehicle, and Uber’s hailing service. It will be highly problematic for Uber to squeeze the cost of developing truly autonomous drive software, profits for the car makers and a profit for Uber into such a narrow sum.

New cars will become much safer very fast — but drivers are not going away — and gasoline still will be pumped. Much less of it though, if plug-in hybrids with 100-mile batteries were deployed to eliminate gasoline for all but long trips to the beach.