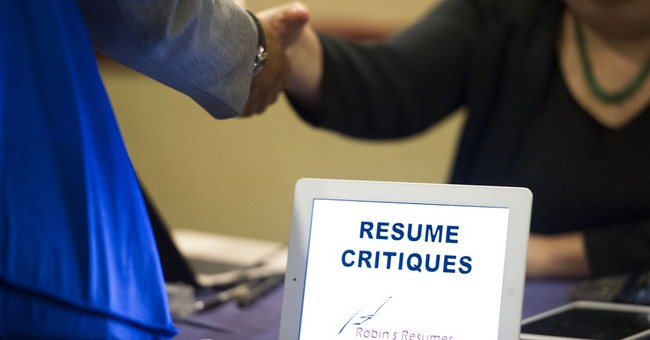 Friday, the Labor Department is expected to report the economy added about 215,000 jobs in September, about half of what is needed each month to bring unemployment down to pre-financial crisis levels.

The official unemployment rate is 6.1 percent, but that hardly provides a fair description of the jobs crisis. Not counted are prime working age adults who have quit looking for a job, part-time workers who want full-time positions, and young college graduates who have enrolled in graduate school because they can’t find decent employment.

The real jobless rate is likely closer to 20 percent, and the root cause is slow economic growth.

Since 2000, GDP has advanced 1.7 percent annually, about half the pace of the Reagan-Clinton years.

U.S. consumers and businesses are spending, but too many dollars go abroad to pay for Chinese consumer goods and Middle East oil.

Washington has chosen to outsource—not reduce—environmental risks associated with petroleum development by prohibiting or curtailing production off the Atlantic, Pacific and Gulf coasts and in Alaska.

Safely developing those resources, along with prudent conservation, would slash oil imports to zero and create millions of jobs.

U.S. business regulations are more costly than necessary to protect consumers and accomplish environmental goals. Along with U.S. efforts to curtail CO2 emissions, while China, India and others refuse to do the same, those send American jobs to Asia.

The U.S. corporate tax is among the highest in the world. Along with arbitrary taxes on overseas profits, high rates motivate U.S. businesses to relocate abroad and discourage foreign investment in the United States.

Whereas deregulation was the theme of the Reagan-Clinton era, today’s leaders appear not to value a vibrant private sector and spirited competition. They offer special privileges that permit Wall Street banks, cable companies, medical insurers and rural hospitals, pharmaceutical companies, and the like to monopolize markets and gouge customers. in exchange for big campaign contributions and lucrative jobs after public officials leave office.

Increasingly colleges and universities attract students by spending heavily on athletic arenas, flashy student centers and other resort amenities. To finance sports spectacles, evening yoga lessons, and ever larger salaries for presidents and coaches, universities jack up tuition and shuffle students into cheap to staff majors, such as art history and sociology, while limiting access to programs with better career potential, like engineering and finance. Too many graduates lack career ready skills and are burdened with excessive debt.

Thanks to the combination of work disincentives and poor career training, nearly all the jobs created in this century have gone to immigrants. At the low end, they take jobs government benefits programs encourage lower-skilled Americans to refuse, and at the high end, immigrants take jobs many college graduates are unqualified to fill.

Just eliminating the trade deficit would double U.S. economic growth. Addressing the other problems would easily boost growth to 5 percent a year, and Americans would have all the good paying jobs they want and plenty more for new arrivals.

Peter Morici is an economist and professor at the Smith School of Business, University of Maryland, and a national columnist.