O’Leary, a billionaire who serves as a wealthy panelist on ABC’s “Shark Tank” television program in which entrepreneurs seek funding to grow their start-up businesses, shared his personal investing strategies with me recently when I interviewed him in the Shark Bar at the Palms Casino Resort in Las Vegas. He recalled learning about the value of reducing volatility from a female money manager who analyzed balance sheets to find the stocks that offered the best opportunities to receive income and produce capital appreciation for the least risk. 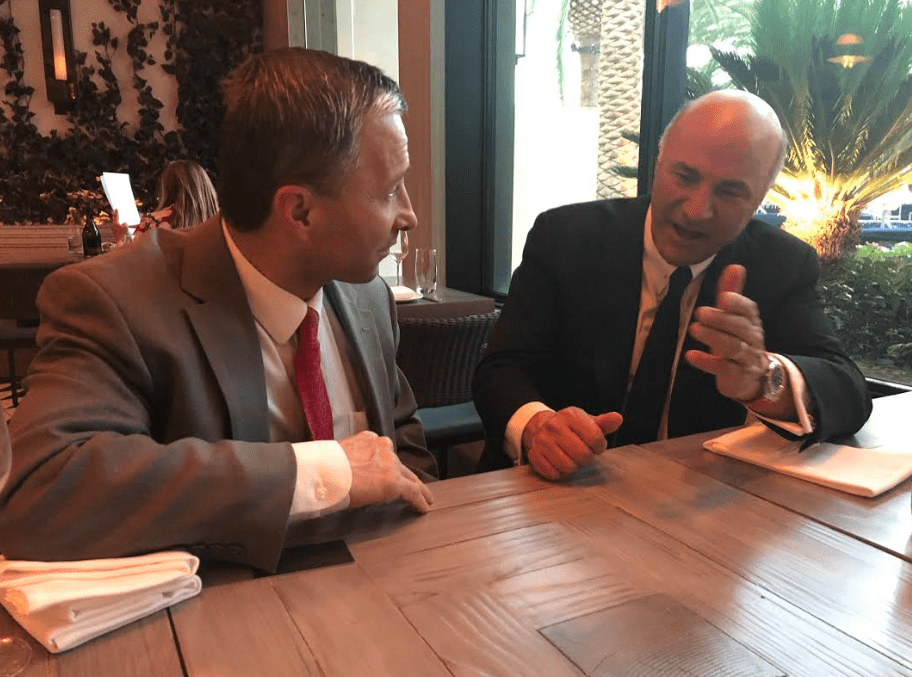 Since the first of the four O’Shares exchange-traded funds (ETFs) only launched in July 2015, none of them have a long track record that can be used to measure their performance against other ETFs. However, O’Leary said that among the roughly 1,700 ETFs that exist, none adhered to his three core investment principles of income, wealth preservation and capital appreciation, so he decided to launch his own.

O’Leary worked with global index partner FTSE Russell, which created innovative rules-based indices for the United States, Europe and Asia to focus on his three core objectives. His inaugural ETF, O’Shares FTSE U.S. Quality Dividend ETF (OUSA), is now listed on the New York Stock Exchange and was envisioned by O’Leary to address his long-term investment objectives of owning a diversified portfolio of quality U.S. stocks that pay dividends and have low volatility.

The low volatility focus is aimed at the preservation of capital to guard against the kinds of market pullbacks that have occurred occasionally since late 2018. In recent months, OUSA has withstood the worst of the fallout from rising trade tensions between the United States and China. In the latest example between July 26 and Aug. 5, OUSA avoided 21 percent of the fallout absorbed by the S&P 500. Another example occurred between April 30 and June 3, when OUSA sidestepped 35 percent of the drop endured by the S&P 500.

The key is to limit balance sheet risk, O’Leary said.

Even though O’Leary told me he does not regard himself as a “value investor,” he said he learned through experience that investing in market downturns requires a focus on companies that offer balance sheet quality.

“It is the only thing that matters,” O’Leary said. 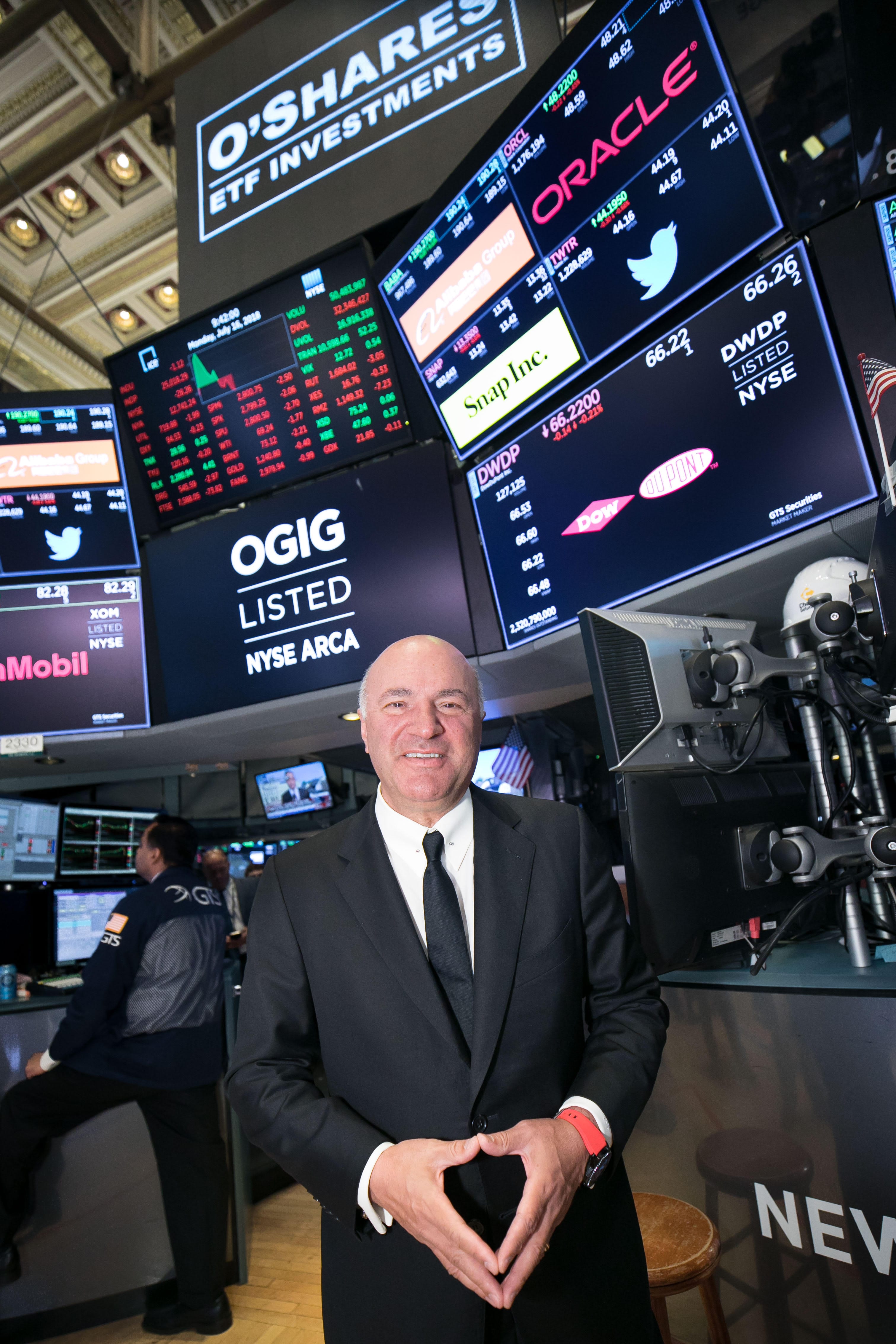 Years of experience in hiring managers to manage his personal wealth on the equity side taught O’Leary about the wisdom of analyzing balance sheets in choosing investments. Many years ago, O’Leary said he became impressed by a female balance sheet analyst who was agnostic about market capitalization and sectors but developed four rules for investing in stocks.

“Each quarter, she would analyze four metrics on a S&P 500 company’s balance sheet,” O’Leary recalled

The first rule is to consider return on assets, which is “an old school” metric which generally takes two quarters to manifest itself either up or down, O’Leary said. It sometimes takes just one quarter if “inventory is piling up,” he told me.

The second rule it to look at free cash flow, while staying agnostic to the cash on hand, O’Leary said. The third rule is to assess leverage to determine whether it is going up or down every 90 days. The fourth rule is to check for volatility against the overall index.

She didn’t care about market cap and instead focused on volatility, O’Leary recalled. With the S&P 500 stocks that she used as her universe of stocks for investing with her four rules, the larger the market capitalization, the lower the volatility.

Basically, O’Leary said what he learned from her was that he received the S&P’s returns with 26 percent more yield, 20 percent less volatility and only incurred 62 percent of the downside on the index’s drawdowns.

O’Leary said his proposal was rejected with a response that “we don’t build indexes for a guy. We build indexes that are unique, and we license them back to geographies and currencies,” O’Leary recalled.

When O’Leary said he showed the FSTE Russell officials his rules, they responded, “We have nothing like this. We’ll spend millions developing it. We have 150 researchers and we’ll develop it and we’ll see if we like it or not.” About a year and a half later, they said, “We like it.”

O’Leary said he was offered the opportunity to license use of the index for American stocks in U.S. dollars, but the developer would own it. Even though O’Leary complained that he had given the rules to use for the index, he was told it would need to be maintained every quarter with 150 researchers working on it.

The stocks it uses are only those with the high-quality balance sheets identified by the four rules, O’Leary said. Those holdings also offer “way more yield” than the S&P 500 and “way less” volatility, he added. 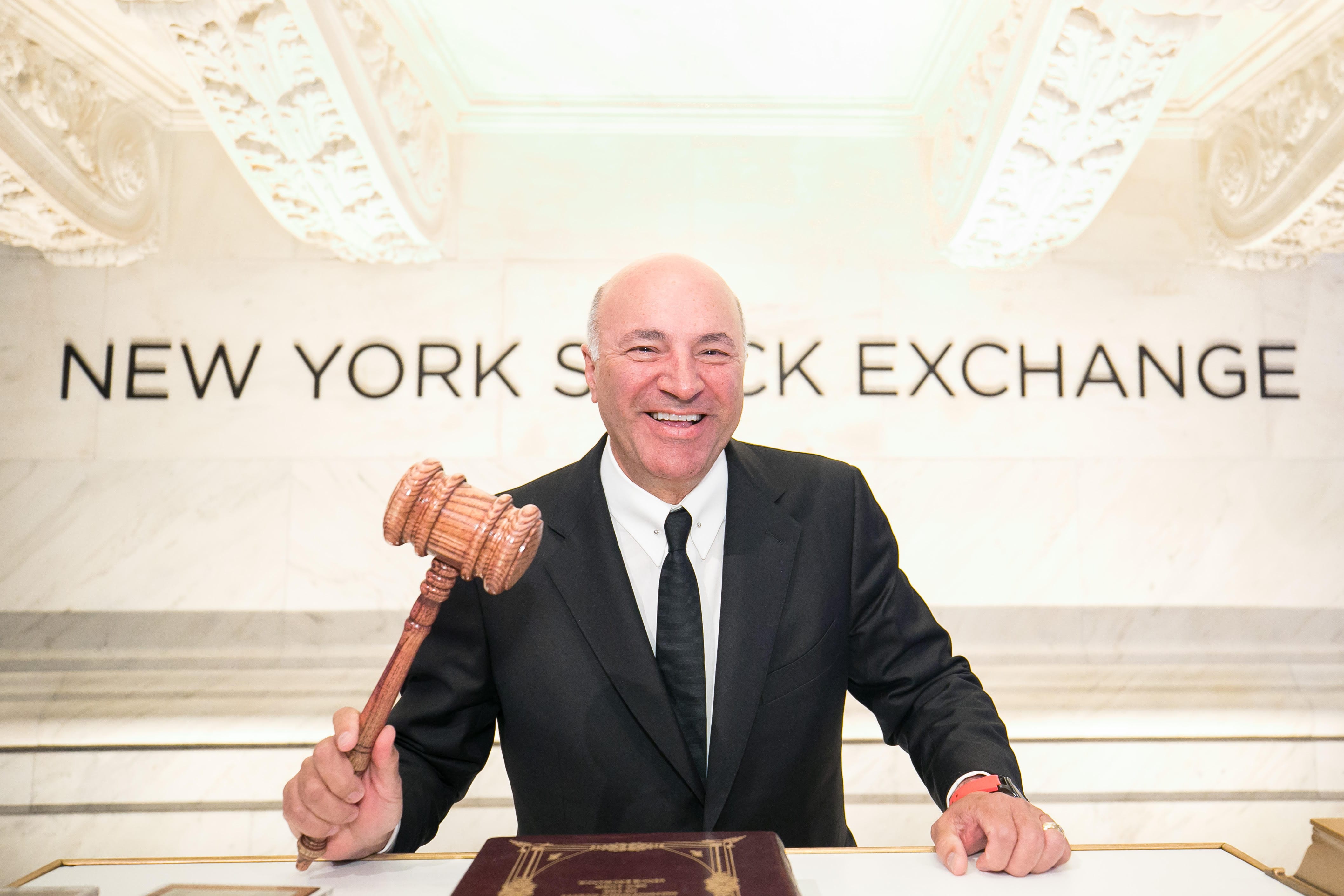 “Mr. Wonderful” getting ready to ring the bell at the beginning of the trading session. 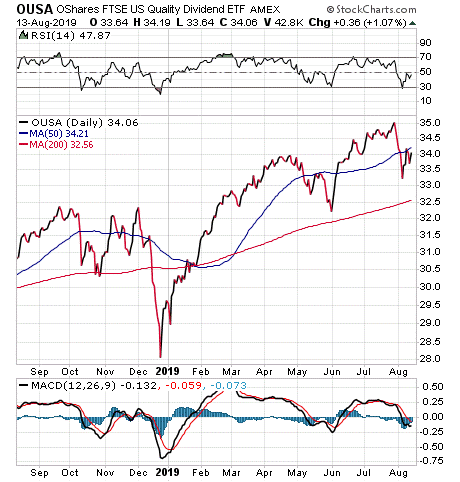 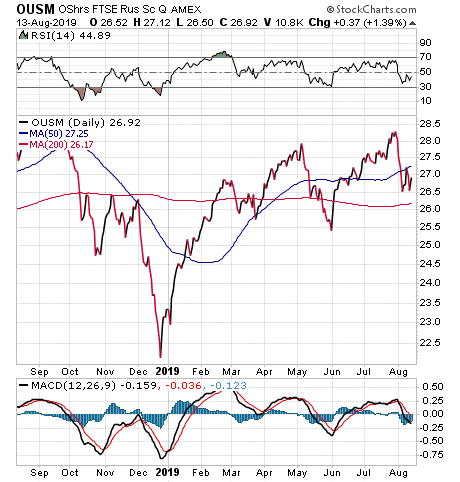 O’Shares FTSE Europe Quality Dividend ETF (OEUR) is intended to track the performance, before fees and expenses, of the FTSE Developed Europe Qual/VOL/Yield 5% Capped Factor Index that measures the returns of public large-capitalization and mid-capitalization dividend-paying issuers in Europe that meet key market-capitalization, liquidity, quality, low volatility and dividend-yield thresholds. The strategy is designed to limit exposure to high-dividend equities that have incurred large price drops. 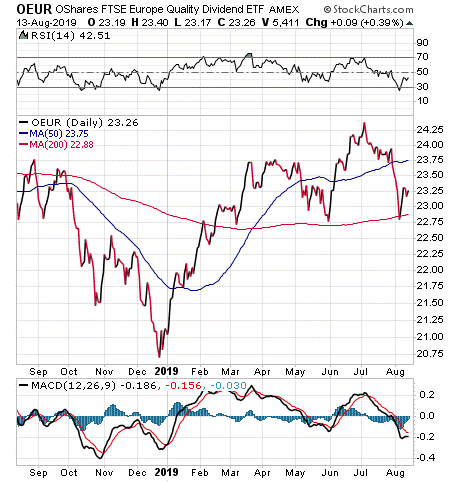 O’Shares Global Internet Giants ETF (OGIG) is designed to mirror the performance, before fees and expenses, of the rules-based O’Shares Global Internet Giants Index featuring some of the largest global companies that gain most of their revenue from the internet and e-commerce sectors. The holdings are chosen to provide quality stocks with growth potential. The ETF’s biggest holdings, as of Aug. 12, were Alphabet Inc., the parent company of Google, (NASDAQ:GOOG); 6.63 percent; Tencent Holdings Ltd. (OTC:TCEHY), 6.15 percent; and Alibaba Group Holding Ltd. (NYSE:BABA), 6.03 percent. The three biggest sector holdings of OGIG, as of July 31, were information technology, 36.93 percent; communications services, 35.33 percent; and consumer discretionary, 27.71 percent. The ETF’s total return, based on its NAV on Aug. 12, reached 25.69 percent year to date but dipped 0.20 percent in the past year, according to Morningstar. 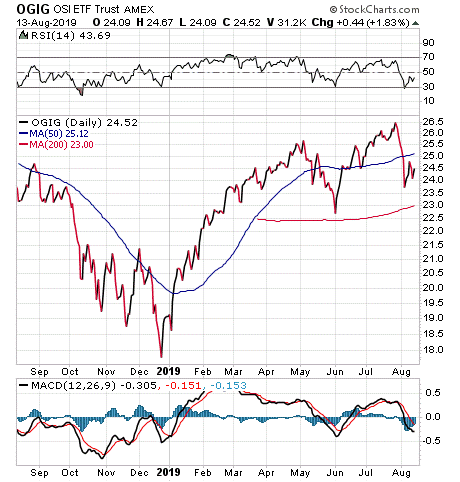 “While an expert stock picker can often capture bigger returns, there’s always the chance that a concentrated portfolio of one or two stocks will hit a speed bump while a wider universe keeps plodding along,” Kramer said. “You pick the experience you’d prefer, whether that’s a roller coaster that ends with either bonanza or bust or a slower glide more likely to lead somewhere in between. If you can’t achieve diversification on your own, this is the quick way to get it.”

In addition, many ETFs also open up access to stocks that are challenging for U.S. investors to buy separately, Kramer said. Within O’Shares ETFs, one example is the European Large Cap Quality Dividend Fund (OEUR), which includes companies such Nestlé and Roche, she added.

“It will be years before we know if that’s a short-term change or a permanent change in the markets,” Carlson said. “Regardless, investing based on the factors should result in lower risk and volatility, and the O’Shares ETFs have delivered that in their short lives.”

Since the O’Shares ETFs are relatively new, they aren’t widely held and the value of the shares can fluctuate from net asset value, Carlson said. When OUSA was new in 2015, the shares fluctuated from a premium of 0.41 percent to a discount of 0.32 percent, he added. In 2018, the shares ranged from a 0.27 percent discount to a 0.19 pecent premium. OEUR has a wider range of discounts and premiums to NAV.

Investors who sell shares during a period when other investors are heading to the exits are likely to be selling their shares at a discount to NAV. A mature ETF usually has a much lower variation between share price and net asset value.

In addition, the ETFs have net expenses that are higher than the category average, according to Morningstar.

O’Leary expressed optimism that investors would look for ETFs such as those at O’Shares to limit volatility in hopes of preserving capital when the markets drop. For investors who like O’Leary’s strategy and don’t mind paying higher-than-average expenses to follow his four rules for investing, his funds offer something that the other approximately 1,700 ETFs in existence currently cannot match.

Publisher’s Note: Special thanks goes to Mark Skousen for inviting Kevin O’Leary of “Shark Tank” to speak at this year’s FreedomFest in Las Vegas. StockInvestor.com and Eagle Financial Publications were premier partners at July’s FreedomFest event. Mark founded FreedomFest in 2007 to bring together the best and the brightest thought influencers from around the world to talk, strategize, socialize and celebrate liberty. With this year’s impressive attendance of 1,920 people, the three-day festival continues to live up to its billing as “the world’s largest gathering of free minds.” You can learn more about FreedomFest by clicking here to reach the official website.