The “Shark Tank” television program’s “Mr. Wonderful,” Kevin O’Leary, told me when I joined him for sushi and wine in the Shark Bar at the Palms Hotel in Las Vegas that he has found it more profitable to buy collectibles such as the best guitars he can find than to invest in stocks.

Guitars are among the collectible assets that are appreciating more than the stock market, O’Leary said. Other collectibles that have soared in value beyond the stock market’s performance include top-end watches, premium wine and pens, he added.

O’Leary recalled learning about a special guitar, a 1969 Fender Telecaster, that had just become available for sale at Rudy’s Music in New York City. He asked to look at it and told me he was wowed at first sight. 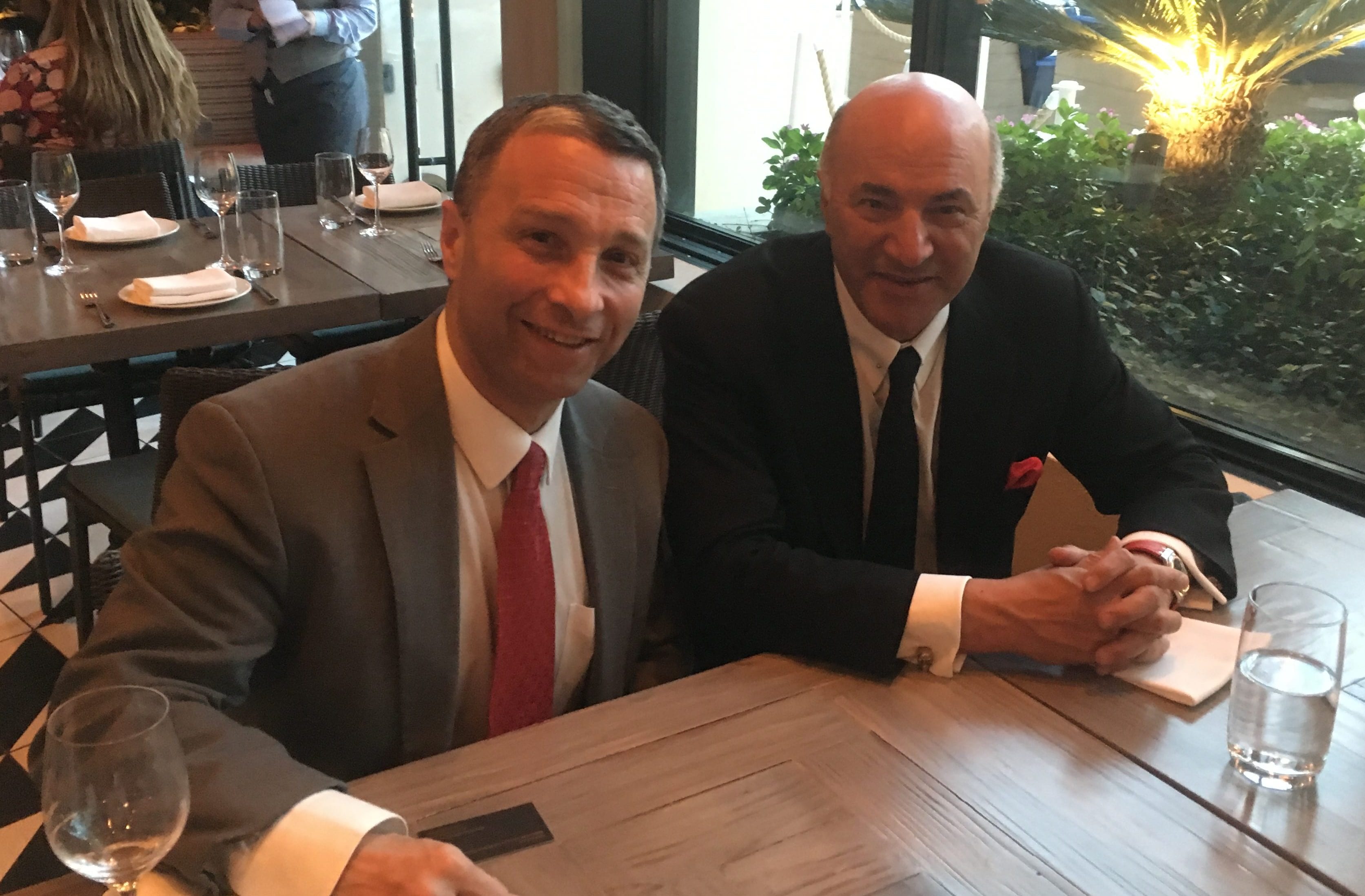 “I said, ‘Look, I have to buy this guitar right now,’” O’Leary recalled. “‘I never want it to go to the sales floor. This is my guitar. It’s destiny.’”

O’Leary recalled the salesman telling him, “Look, I’ve got to go back to them [the sellers] and talk about the price.”

After two hours of negotiating, O’Leary bought the 1969 Fender Telecaster before it even reached the music store’s sales floor.

“This guitar is a piece of art,” O’Leary told me. “It is in pristine condition.”

O’Leary posted a photo of the guitar on Instagram and it drew attention from his wife, who he said quickly called him to complain and to ask where he planned to put it among his numerous other guitars.

“Where is this guitar going to go?” O’Leary recalled his wife asking. “We’ve already got so many guitars.”

O’Leary, who now owns a ’61 Fender Stratocaster and a ’69 Telecaster, said he told his wife, “Honey, this guitar is going to go up in value more than the stock market until I’m dead. Unfortunately, I’m taking it into my grave because I am going to need it in the after world. I’m not leaving it. I’m taking with me in my coffin the ’61 and the ’69 because I’m going to need them.”

O’Leary was not shy about expressing his delight with the purchase.

“The Stratocaster was only owned by one teacher at Berkley College in Boston,” O’Leary said. “He was on many surf songs in the ‘60s. He died and his wife was going to put it up for auction in Texas. I was at a barbeque a few months ago in Boston and I heard about the guitar. I said, ‘I want to meet the widow. I’ll buy it at the price she thinks she’s going to get. I’ll just take it. You [typically] can’t buy those things.’”

O’Leary told me his 1961 Fender Stratocaster is the guitar equivalent of a Stratovarius violin.

“Since I am a shareholder in Fender, I own many guitars that were custom made for me,” O’Leary said.

One such guitar was made of olive wood and displayed his nickname of “Mr. Wonderful” that was popularized from the “Shark Tank” television program in which he serves as one of the wealthy panelists who is pitched by start-up entrepreneurs seeking funding to grow their businesses.

“There are only two guitars made out of olive wood and I own one of them,” O’Leary said. “It was made for me.”

In addition, O’Leary said he has “Shark Tank” guitars and ones signed by legendary guitarist Les Paul.

The value of collectible guitars depends on the original owner, musician or rock star and the age and manufacturer of the instrument,” said Viliam Gutray, who has used a Fender JB American standard 4 string guitar during his career as a bass guitarist that began in 1988 and includes 23 years with the “No Name” band in Europe.

The Fender and Gibson made guitars probably are the most valuable, Gutray said.

Signed guitars also can add value for collectors. The “No Name” band, formed in Kosice, Slovakia, during August 1996, donated a guitar to the Hard Rock Café in Prague at a charity fundraiser there. Each band member, Gutray, fellow guitarists Roman and Dusan Timko, lead singer Igor Timko, drummer Ivan Timko and keyboardist Zoltán Šallai, signed the guitar to enhance its value. 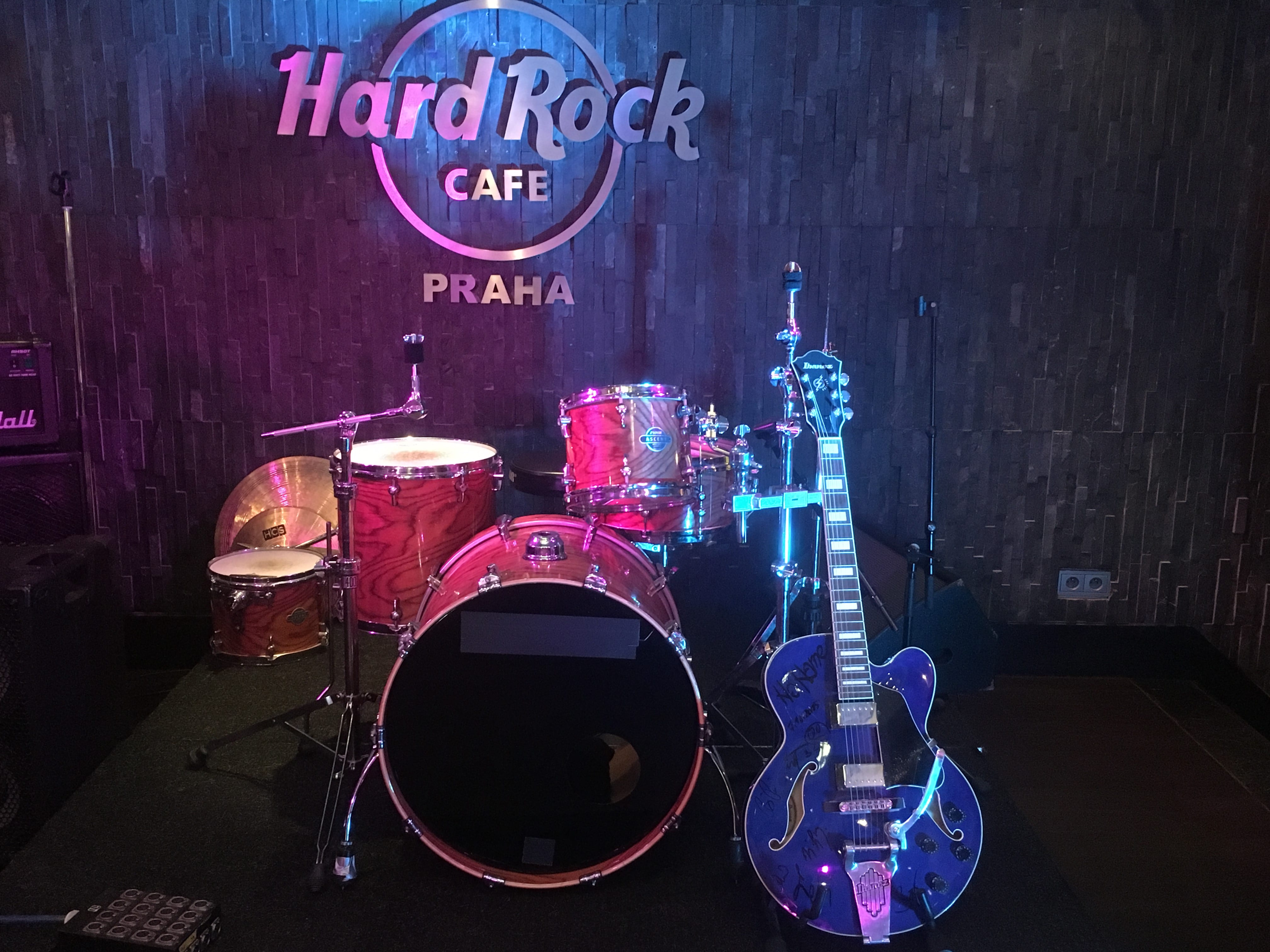 This guitar at the Hard Rock Cafe in Prague was donated by the “No Name” rock band for a charity event. Each band member signed the guitar.

I traveled with the band for a couple of days during 2016 and sat in the seat normally occupied by the lead singer during a five-hour drive in a sports utility vehicle across Slovakia’s mountainous terrain amid heavy rain. I gained an appreciation of the care the musicians devote to their instruments and their craft.

Musicians, such as the late John Lennon, inspire love and devotion from their fans, as O’Leary conveyed in describing his passion for purchasing the best guitars he can find. 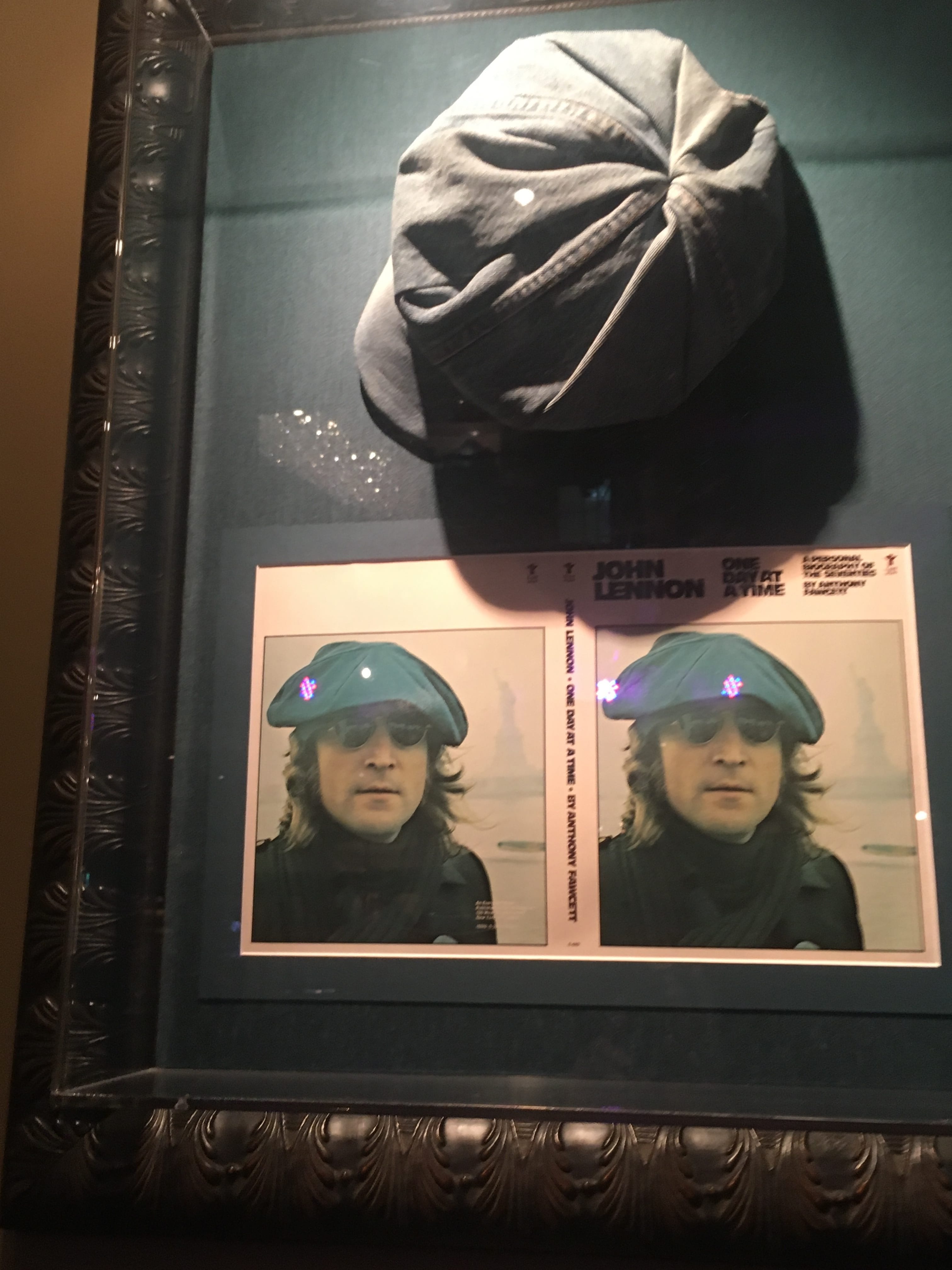 This memorabilia features a photo of John Lennon and his cap at the Hard Rock Cafe in Prague.

The most prestigious watches compose another class of collectibles that has beaten the market in the last few years, along with guitars, O’Leary said.

Prospective watch buyers can use online apps to help assess the current market value of a time piece they may want to buy, O’Leary told me. His favorite app is the Chronos 24, which he learned about from Saudi Arabians who he has met during his frequent travels for speaking engagements in Dubai, a city in the United Arab Emirates that is known for luxury shopping.

That app “marks to market” the last trade of every watch on Earth, O’Leary said. Someone can input the serial numbers of each watch in his or her collection and get a market valuation every hour, he added.

Forbes magazine reported in November 2015 that O’Leary owned about 32 watches and they typically are fitted with his signature red strap. That eye-catching red strap is visible on a recently posted photo from O’Leary’s Instagram page.

“You can use the platform to sell your watches, which I never do,” O’Leary said. “But the point is it’s a better asset class than stocks. These hard assets are outperforming a lot of different indexes now.”

The watch O’Leary wore when I met him was a steel Audemars Piguet Jumbo with a blue face and a modified red band.

“You’ll never see this watch again in your life,” O’Leary said. “Nobody knows how many they make in a year. You can’t buy one. The waiting list is 10 years.”

It is not the most expensive watch directly from the manufacturer, but it is the most difficult to buy, O’Leary said.

Canadian entrepreneur and investor Miles Nadal agreed to pay $850,000 for a collection of 99 pairs of rare sneakers from Nike, Adidas and Air Jordan on July 18 at an auction by Sotheby’s and digital retailer Stadium Goods. The high price shows rare sneakers are becoming coveted collectibles, CNBC reported.

Nadal, a collector of classic cars, beat out all bidders again on July 23 when he set a record by paying $437,500 for a pair of Nike waffle-soled running shoes that were designed by the shoe manufacturer’s co-founder Bill Bowerman for the 1972 Olympic Trials. Nadal said he plans to display the 100 pairs of sneakers he purchased during his five-day shoe buying spree at his private Dare to Dream Automobile Museum in Toronto.

The previous record for the price paid at an auction for a pair of tennis shoes was set in 2017 at $190,373 for a pair of Converse signed by basketball star Michael Jordan, who wore them in the final game of the 1984 Olympics, according to a Sotheby’s statement. The bidding for the Nike Moon Shoe started at $80,000 and it was expected to reach an estimated $160,000 before Nadal paid almost 2.5 times that much to add that pair of sneakers to his collection. Only 12 pairs of the Moon Shoes were made, and Nadal bought the only unworn set.

Not All Collectibles Are Worth Buying, ‘Mr. Wonderful’ Warns

O’Leary has not purchased rare sneakers, but his collectibles include Andy Warhol paintings and other forms of modern art. However, O’Leary, who also is chairman of O’Shares ETF Investments, cautioned that insurance is expensive and restrictions on the policies limit how and where the art can be displayed.

“Collectibles are often considered a diversifier, a way to hedge your overall financial portfolio when neither stocks nor bonds are providing the performance you want,” said Hilary Kramer, a Wall Street money manager who leads the Value Authority, GameChangers, Turbo Trader, High Octane Trader and Inner Circle advisory services.

Plus, there is no shortage of valuable and coveted things to accumulate: fine wines, classic cars and jewelry, Kramer said. Some people who would have speculated on antique violins a generation ago now buy guitars, she added.

“However, unless you’re a talented or lucky appraiser, it’s hard for most investment-grade collectibles to keep up with inflation over the long term,” Kramer said. “Stocks around the world have gained about 5 percent a year going back to 1900. Wine comes closest with a 3.7 percent return over that time period. Art did even worse.”

The moral for most people is that they will sacrifice returns to own something more aesthetically pleasing than some letters and numbers on a brokerage account statement, Kramer said. But there still will be periods like the late 1980s when classic cars, for example, outperformed the S&P 500 by luring cash holdings from investors who were scared out of the stock market, she added.

Another exception occurred in the 1940s when fine wine was scarce and bottles sold at steep premiums, Kramer said. Top quality guitars are trading at premium prices now, too, she added.

“But if you’re all about the money, I’m still a fan of stocks and I’m not alone,” Kramer said. “The latest survey of the world’s wealthy people found that the elite only keep 6 percent of their net worth in collectibles. For most of us, it’s fun, not finance.”

For investment “sharks” like O’Leary and the world’s other top investors, selected collectibles may pay off as investments. For mainstream investors who do not own private museums to display their treasured possessions, paying premium prices for assets that could lose their faddish appeal may be too risky to pursue beyond one’s wildest dreams.