A Fiat Chrysler-Renault merger could be the start of an industry-wide consolidation in which existing vehicle manufacturers aggressively cut and share costs to amass the billions of dollars they plan to spend in the development of electric and self-driving vehicles.

The merger proposed by Fiat Chrysler Automobiles N.V. (NYSE:FCAU) includes creating the world’s third-largest vehicle manufacturer, saving roughly $5.6 billion (€5 billion) annually and positioning a combined organization as a global force to build and sell electric and autonomous vehicles. Fiat Chrysler has undergone a leadership transition since last year’s July 25 death of its former chief executive officer, Sergio Marchionne, who had led its financial turnaround and had spoken openly in recent years about the need for industry consolidation. 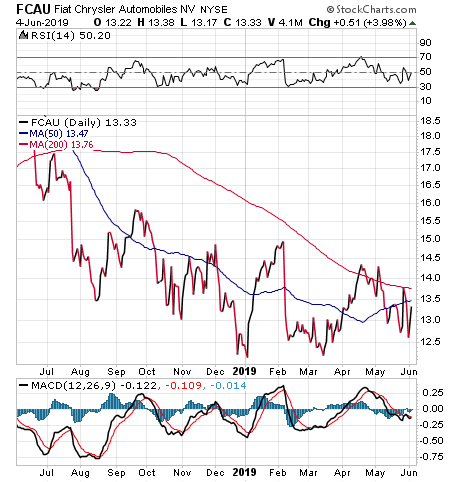 The merger would give Italian-American Fiat Chrysler and France-based Renault SA (OTC:RNSDF, RNO.FP) each 50 percent ownership of the unified company. The new entity’s balance sheet would allow for “flexible capital allocation” and a “robust” dividend policy, according to a Fiat Chrysler statement.

“The smaller and even medium-size car manufacturers need to join forces to compete,” said Bob Carlson, who leads the Retirement Watch advisory service. “Some are trying cooperative agreements and joint ventures. Others are looking at mergers and consolidation.”

Unlike in the past, vehicle manufacturers are not trying to create manufacturing and operational efficiencies as much as put a “critical mass of resources” into research and development (R&D) for the technology that is becoming the core of new vehicles, Carlson said. The smaller and mid-sized companies not only are competing with the large vehicle manufacturers but also with Google (NASDAQ: GOOGL) and other technology companies that have entered the business, Carlson added.

“Fiat Chrysler and Renault appear to be a good fit, because there isn’t much overlap in current key markets,” Carlson said. “If they can successfully integrate and develop technology that can be shared across all their vehicle platforms, the pay-off could be significant.”

“As with any major industrial merger, there are synergies and overlapping operations that will be merged,” said Bryan Perry, who leads the Cash Machine, Premium Income, Hi-Tech Trader, Quick Income Trader and Instant Income Trader advisory services. “A $40 billion tie up between the two companies demonstrates the global auto market continues to consolidate to pursue production efficiencies.”

An estimated $5.6 billion in annual savings would be achieved through the Fiat Chrysler-Renault merger and give the surviving company footholds in regions of the world that the current companies had not been able to serve independently. The deal specifically would give Renault increased access to the U.S. market, while Fiat Chrysler would benefit from Renault’s electric vehicle and autonomous car technology.

The combined product line of Fiat Chrysler-Renault would span luxury to mainstream brands that sold 8.7 million vehicles and generated an operating profit of more than $11.1 billion (€10 billion) in 2018. If merged as Fiat Chrysler proposed in its non-binding offer letter to Renault, the beefed-up entity would rank No. 2 in the Europe, Middle East and African markets, No. 4 in North America, based on 2018 sales, and position itself to enhance its competitive prowess in the Asia-Pacific region.

If Renault approves the merger, still to be resolved will be the role of its current Japanese alliance partners Nissan Motor Co. Ltd. (OTC:NSANY) and Mitsubishi Motors Corp. (OTC:MMTOF). The Renault-Nissan-Mitsubishi Alliance combines to build one of every nine cars sold globally and the three companies employ 470,000-plus people in almost 200 countries.

Marchionne’s focus on preserving precious capital by partnering with other companies on electric and self-driving vehicles positions Fiat Chrysler to leverage the value of its iconic brands, which include Jeep, Ram trucks and Maserati sports cars. Those brands may help to entice Renault to merge. In addition, Fiat Chrysler’s Ferrari S.p.A. business unit also is part of its global operation.

Fiat Chrysler further is reaching out to Renault at a strategically significant time, with virtually all automakers strategizing for survival in a marketplace that in recent decades has attracted new competitors such as Tesla Inc. (NASDAQ:TSLA). Plus, Renault may find comfort in aligning with Fiat Chrysler after its current strategic alliance partner Nissan incurred a 4.4 percent drop to 5.5 million vehicle sales worldwide in its most recent fiscal year ended March 31. A further sign of deterioration at Nissan is that its operating profit slid 45 percent to roughly $3 billion during its last fiscal year.

The Renault-Nissan-Mitsubishi Alliance forged by recently imprisoned leader Carlos Ghosn has helped all three companies, but the arrangement is complicated by the governments of France and Japan, where the manufacturers are headquartered. Much value already has been achieved by the Renault-Nissan-Mitsubishi Alliance for cost savings, shared parts and suppliers.

However, the Japanese authorities on Nov. 19 arrested Ghosn, one the auto industry’s most visionary executives, and have confined him in an austere prison while pursuing charges against him for allegedly underreporting his income by an estimated $44 million over five years. The merger overture from Fiat Chrysler offers Renault a way forward from the scandal involving Ghosn, who had served in leadership roles at Renault, Nissan and Mitsubishi before the arrest.

Mitsubishi, the smallest member of the alliance, aligned with the others in 2016 when Nissan acquired 33 percent of its fellow Japanese automaker. Both Nissan, Japan’s second-largest auto maker, and Mitsubishi are among the car manufacturers worldwide that have admitted to falsifying diesel emissions tests, so the companies both clearly have struggled to keep up with industry innovations.

Renault’s current ownership stake of roughly 43 percent in Nissan nearly triples the latter company’s 15 percent share of its France-based alliance member. Renault, on the other hand, does not have an equity stake in Mitsubishi. However, the French government owns 15 percent of Renault and could be a factor in determining the company’s future course with the Fiat Chrysler merger and the existing alliance with Nissan and Mitsubishi.

A combined Fiat Chrysler-Renault entity would own 43.3 percent of Nissan’s shares and voting rights, as Renault currently does. But Nissan’s stake in the merged companies would be diluted to just 7.5 percent. In addition, Nissan would be allowed to nominate a director to the 11-member board of the new combined company under the Fiat Chrysler proposal.

Nissan and Mitsubishi Will Be Affected by Chrysler-Renault Merger

While details of the deal’s structure need to be “massaged to get all parties to the table,” the merger of equals structure is a great place to start, said Hilary Kramer, a Wall Street money manager who leads the Value Authority, GameChangers, Turbo Trader, High Octane Trader and Inner Circle advisory services for individual investors. At roughly $21 billion in market capitalization, Fiat Chrysler is very close to the same size as Renault, she added.

“If anything, Renault shareholders may be getting a 10 percent bigger role in the new company than they would on a pure market-weighted basis,” Kramer said. “Fiat Chrysler is already being generous.”

“Fiat rates a 4.2X earnings multiple,” Kramer continued. “Renault trades at 4.9X earnings, so there’s no huge imbalance there. Both stocks are profoundly undervalued right now because of the structural challenges hanging over the entire auto industry.”

Industry-wide challenges to clear include declining global sales, competition from new propulsion systems, the cost of developing autonomous vehicles and others, Kramer said.

“Where this gets interesting is comparing these numbers to other global car makers that may be looking for partners,” Kramer said.

Toyota (NYSE:TM) is the “undisputed heavyweight,” with close to double the sales of Fiat Chrysler and Renault put together and a commanding 9.6X earnings multiple to back it up, Kramer said. Thus, Toyota has no reason to make any strategic acquisitions for the foreseeable future, she added.

Kramer wondered if General Motors (NYSE:GM) and Ford (NYSE:F) could transform the global map if they had the vision to partner with each other or if the latter company tightened its current partnership with Volkswagen.

The partnership and merger possibilities for global automakers could begin to go from speculation to implementation. But caution is required to choose wisely, since a failed marriage in the auto industry could become catastrophic.