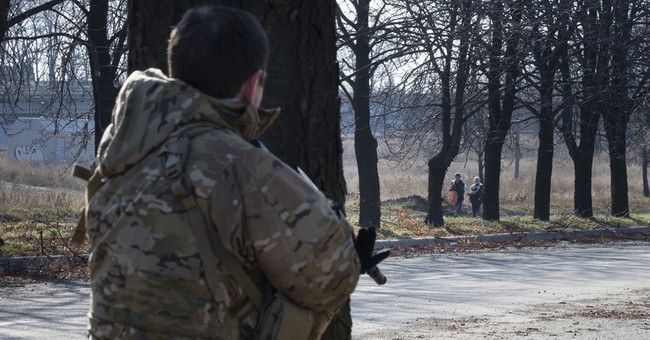 Ukraine: Today, the deputy prime minister of the Donetsk People's Republic said that fighting has resumed in eastern Ukraine. Andriy Purhin told Russian media, "A full-scale war is going on now... We are being attacked; we are defending." He said the cease-fire was not being observed on 75 per cent of the demarcation line and claimed that "now they are fighting in places where they weren't fighting before".

Earlier in the day rebels said that a column of Ukrainian tanks had entered the town of Yasynuvata near Donetsk. They also said Ukrainian forces shelled targets on the outskirts of Donetsk.

Rebel sources said the Ukrainian forces were attempting to reach Donetsk airport which is in Ukrainian control, but cut off from other Ukrainian-controlled territory. The Kyiv government denied it started an offensive.

Russian reaction. At a meeting of the Organization for Security and Cooperation in Europe (OSCE) today, the Russian representative questioned Kiev's adherence to the Minsk and Geneva agreements for settling the Ukrainian crisis.

Russian representative Andrei Kelin said, "We have raised the question of the column of tanks offensive in Yasynuvata in the context of Kiev's failure to implement the Minsk agreements, as well as the Geneva agreement of 17 April….We have shown clearly, based on concrete facts, that Kiev has violated almost all the clauses stipulated in the Minsk protocol. This refers to the non-adoption of the amnesty law, to the law on the special status of the Donetsk and Luhansk regions, which they want to revoke now. This refers to the escalation of the conflict," the Russian official stated.

The Russian Foreign Ministry said, "It is obvious today that these agreements have been crudely violated by the Ukrainian side….In place of de-escalation, Kiev has intensified the hostilities in the southeast of the country with the use of heavy equipment, which has led to thousands of casualties and large-scale destruction."

Comment: Open source reporting does not confirm the resumption of large-scale conventional military operations. The military activity appears to be moves to improve one or the other side's local tactical advantage. Nevertheless, the security situation appears to be deteriorating. Fighting will increase.

Libya: Libya's Supreme Court announced the dissolution of the UN-backed elected parliament, which took refuge in Tobruk. The Constitutional Circuit in the Supreme Court ruled on Thursday to accept the appeal concerning the illegality of developments leading to the 25 June elections that resulted in the parliament that relocated to Tobruk.

The decision leaves the parliament sitting in Tripoli as the only legitimate governing body. A member of the Tripoli parliament filed the challenge to the constitutionality of the 25 June elections on which the Court ruled today.

One member of the parliament in Tobruk said that lawmakers will not recognize a verdict decided under the gun." He was referring to the militias that control Tripoli, where the Court sits..

Comment: The Court's ruling has little practical effect on the collapse of Libya as a state. Well-armed tribal or sectarian militias control or fight over the various regions of Libya. Both parliaments most likely will continue to meet and argue about which group should receive oil revenues. One of the positive aspects of the security situation is that none of the militias seem interested in shutting down the oil industry, at least for now.

On the other hand, the Court ruling has important implications for outside interests, including those of the UN and the US. Most European states sided with the UN in supporting the Tobruk parliament, which is moderate and pro-West. The ruling makes illegal any provision of support to that group, which Western policymakers hoped would reunify Libya in time.

Burkina Faso: Burkina Faso's political parties agreed that the country's political transition should last a year, culminating in elections in November 2015. However, the crisis talks in Ouagadougou this week ended without a deal on who would head a transitional government.

The African Union (AU) on Monday gave the military two weeks to hand power to a civilian ruler or face sanctions. Lieutenant Colonel Isaac Zida - the interim leader backed by the army - promised to comply with the two-week deadline.

Comment: Zida apparently recognizes that he is in over his head. He has taken no action to grab and retain power for himself and appears genuinely interested in lowering his profile. Three prominent African heads of state brow beat him severely this week.