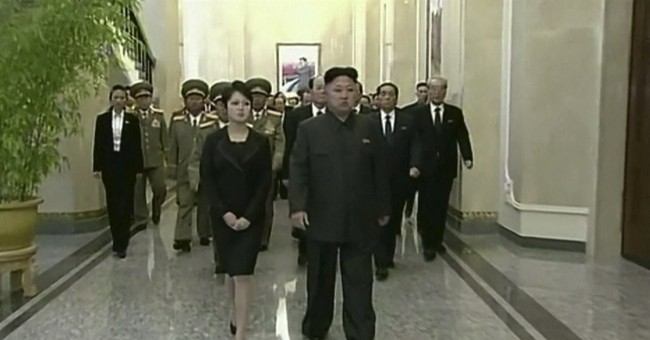 North Korea: The Korean Central Broadcasting Station aired a large assembly of men from the Korean People's Army (KPA) who gathered for the purpose of pledging their loyalty to Kim Jong Un on 16 December. The meeting was held outdoors on the plaza of the Kumsusan Palace of the Sun in Pyongyang. Vice Marshal Choe Ryong Hae, the Chief of the General Political Department led the pledge.

The announcer said that officers and men of the Army, the Navy, the Air Force, and the Anti-Air Force of the KPA were represented.

He also said that "we will intensely wage the ideological battle to crush the heterogeneous and decadent bourgeois idea and culture" with the strength of the military-first culture in order to "make only the blood of chuch'e, the military-first-type blood, flows in the entire army."

Finally, Choe said, "Keeping in mind that (the enemies) wage war without propagandizing it, we will always maintain a highly agitated state, strike the entire base of aggression if the enemies dare to make a clumsy fire, and accomplish the historic cause of the fatherland's reunification without fail."

Comment: North Korea has a new young leader. The Chief of the General Political Department -- the top Party commissar -- and other senior staff are new too. Nevertheless, the scenario is identical to that of Kim Chong-il's consolidation of power. The Army is in the control of the leader again and pledges itself to conduct more purges.

Within two months of the death of Kim Il-sung, Kim Chong-il nearly was assassinated. There were many subsequent uprisings against Kim Chong-il, but the most sensational was that by the VI Army Corps in North Hamgyong Province in northeastern North Korea.

The entire leadership of that corps rebelled against the great leader in April 1995. The coup was thwarted when it attempted to march on Pyongyang from the east coast. The corps commander betrayed the coup. Forty officers were killed and 300 men severely punished. Many senior officers fled to China where they remain.

The effect of that coup attempt was to make Kim Chong-il entirely dependent on the army. He abandoned any pretense of pursuing economic openness and replaced it with the "military first" doctrine still in use.

Similarly, Kim Jong Un's dependence on the army has been consolidated by the failed coup attempt. That is the significance of the loyalty pledge assembly in Pyongyang. Expressions of loyalty will become nationwide. The army's pledge of loyalt captures the leader in almost medieval fashion because it signifies an exchange of obligations.

The key point is that the army appears to be manipulating the Kims to perpetuate its influence and command of national resources. North Korea was a praetorian state under Kim Chong-il. After a brief interlude under the influence of Chang Sung-taek, it is again a praetorian state.

North Korea- South Korea: On 16 December thousands of North Korean propaganda leaflets fell on Baengnyong Island (also called P-Y Do) off the northwest coast of South Korea, warning of an attack against the island, according to South Korean press.

The leaflets carried threats of bombings and identified the South Korean Marines stationed on the island as the first target to be wiped out. They also warned that North Korean troops were always ready to strike the island with their "unprecedented" fire power and turn it into "a large graveyard."

A South Korean marine unit based the island collected the leaflets.

Comment: More than three years ago North Korean artillery shelled Baengnyong-do without provocation, killing four people and causing extensive property damage. In the past two weeks, South Korean media sources have reported leaks of official information that North Korea has once again reinforced its forces on the coast opposite Baengnyong-do.

Both sides engage in propaganda battles, but this time the buildup of North Korean forces capable of launching an attack without warning matches the warning in the leaflets. South Korean forces are on alert.

At a time when the North is making overtures for restoring normal economic activities at Kaesong, it also is threatening Baengnyong-do. This is dangerous, disjointed behavior.

Afghanistan-Iran-India: Since 8 December a strategic readjustment has taken place in South Asia, at least on the surface. Afghanistan has entered potentially significant agreements with Iran and India.

Iran. International media reported on 8 December that, "Afghanistan agreed to a long-term friendship and cooperation pact with Iran," according to President's Karzai's spokesman Aimal Faizi. "The pact will be for long-term political, security, economic and cultural cooperation as well as regional peace."

President Karzai reached the deal with Iranian President Hassan Ruhani in Tehran on Sunday. At the meeting Ruhani restated Iran's strong opposition to a foreign presence in the region and its destabilizing effect.

India. Karzai made his third visit to India this year on 13 December. The visit produced several significant agreements.

India also agreed to assist in equipping the Afghan forces with non-lethal equipment, such as vehicles and kit. The agreement does not include any deployment of Indian combat troops to Afghanistan. Both countries already share intelligence information.

India agreed to furnish Afghanistan with economic aid and assistance. The agreement provides an additional $500 million on top of the $1 billion India has already spent since 2002. In addition, India and Afghanistan will cooperate in the development of mining and energy production.

Finally, Afghanistan and India will establish a strategic dialogue between their respective national security advisers "to provide a framework for cooperation in the area of national security."

Iran. Besides defense and security, Prime Minister Singh and President Karzai also agreed to work with Iran in developing new trade routes to facilitate trade and transit to Afghanistan and beyond.

One of these is a land route beginning from the Iranian port of Chah Bahar. It enters Zaranj on the Afghan border from where India has built a road feeding into the Ring Road that connects major Afghan cities. A spur connects Afghanistan to Central Asia, thus opening up further prospects for India's trade and economic drive in non-traditional markets.

India and Afghanistan are seeking facilities for trade representatives in Chah Bahar.

Comment: The US and Pakistan are significant by their absence. Karzai is much maligned in the US, but in one week he has strengthened alliances that might help him after US forces depart. Both India and Iran strongly oppose the Pashtun Taliban and have stood by Afghanistan before the US became involved in 2001.

Karzai is looking to the game beyond the end game of US involvement. In South Asia, it is settled lore that US interest is transitory and the US always leaves.

The arrangements Karzai is making are rooted in history. That history is dedicated to containing Pakistan, which has been a constant agent of instability in South Asia since World War II.

Any Afghan agreement with India, which already has thousands of Border Roads Organization paramilitary personnel in Afghanistan, will aggravate Pakistani fears of having to fight a two-front war. Those fears are quite realistic. That explains recent rumors that the Pakistan Army has been restoring its ties to the Afghan Taliban, in addition to supporting the Kashmiri militants.

History is resetting itself in South Asia, in anticipation of the US and NATO departure.

Tunisia: The ruling Islamist party, Ennahda, and opposition parties have reached an agreement on a new prime minister, who would lead an independent caretaker administration until elections can be organized next year. Mehdi Jomaa, Industry Minister, will head the caretaker government.

According to Tunisian analysts, the deal on a new premier, announced last Thursday, should clear the way for the current government to step down later this month and end the protests and street disorders.

Comment: Tunisia often is cited as the most European and civilized of the Arab states. And yet, three years after the so-called Arab Spring began in Tunisia with the overthrow of Ben Ali, elected representative government and economic progress have failed to flourish.

The elected government was not representative of Tunisians, according to Tunisians. It also was completely incompetent in managing the economy and sought to make Tunisia more devout in ways that the vast majority of Tunisians opposed. The so-called Arab Spring elections were a political and, more importantly, an economic catastrophe for Tunisia, a prosperous country, just as they were in Egypt.

Powerful secular or tolerant groups, such as the trade unions, have forced political change that is more consistent with recent Tunisian history. The catch in the scenario is that a majority of less educated, rural Tunisians again might return an Islamist party to power againthrough the elections in 2014. That is a scenario for more political violence.