Getting High on the Taxpayers Dime 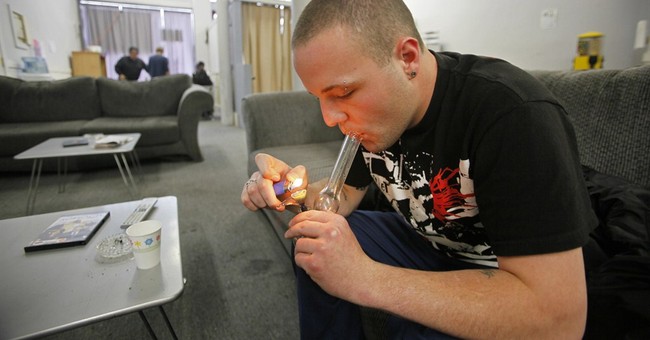 You knew it was coming.With the legalization of pot in Colorado and other states, it has been discovered that over the past few months, purchases of marijuana in pot dispensaries have been paid for with cash from welfare benefits.

The purchase of marijuana is strictly a cash business so it was obvious that ATM machines should be made available inside the dispensaries for easy access to money.That’s fine except that there is no distinction between a credit/debit card and an EBT card.

Taxpayers have given this money to people that are “in need of assistance”, not to people who need to get “high”.In one month in Colorado 19 different marijuana retail stores had a least one welfare recipient walk in, use a Quest card and withdraw money from an ATM machine inside the store.It doesn’t take a rocket scientist to figure out what they were buying.Welfare clients used state-issued debit cards in stores with names like “Medicine Man”, “Starbuds” and “MMJ Uptown”.Gee, can’t imagine what they sell.

An investigation showed that a majority of people use the money for rent, household supplies and items for their children, but the Colorado Department of Human Services admits that there are those that abuse the system.

According to National Review:

At least 64 times, public-assistance benefits were accessed at businesses selling marijuana. A total of $5,475 in public benefits was withdrawn at ATMs in establishments that sell pot. This figure includes medicinal dispensaries, recreational stores, and at least one place that combines the two. Some of these establishments sell groceries as well as pot, so there is no way to know exactly how much welfare money was spent on marijuana.

The amounts withdrawn ranged from $20 to $400, averaging $85.55, according to the transaction records. In Colorado, the average household receiving Temporary Assistance for Needy Families (TANF) benefits includes one adult and two children, and the maximum monthly benefit for them is $462.

Unfortunately, Colorado lawmakers failed to pass legislation that would prohibit the use of EBT card withdrawals inside of marijuana shops, medical-marijuana dispensaries and strip clubs, but last year they did pass a law stopping EBT transactions at gun shops, bars, liquor stores and gambling establishments.When Colorado Amendment 64 was passed to legalize marijuana, the Republicans wanted it to be treated the same as alcohol.This new bill that was defeated by the Democrats in the State Senate basically opens the door for your tax dollars to be used by welfare recipients for weed and lap dances.

Arizona Congressman Paul A. Gozar (R) just this past week has introduced legislation called the “No Welfare for Weed” Act (H.R. 4142).It would prohibit the purchase of marijuana products using TANF (Temporary Assistance for Needy Families) or SNAP (Supplemental Nutrition Assistance Program) benefits.SNAP EBT cards can be used if marijuana is sold from a vendor who also sells food.

Congressman Gosar explains it this way:

"Regardless of your feelings on States’ Rights, 'medical' marijuana or recreational marijuana, people shouldn’t be able to get high using hard-earned taxpayer money. The sole purpose of this bill is to prohibit marijuana from being purchased with SNAP and TANF benefits. These programs are meant to provide subsidies for food and other basic living essentials for the neediest families. Unfortunately, there are always unscrupulous people looking for ways to game the system, which makes this commonsense update to federal law necessary. Taxpayers expect and deserve a lean, efficient government. Accordingly, I will do everything in my power to eliminate waste, fraud and abuse whenever possible, including preventing the use of federal welfare benefits to purchase weed."

Entitlement fraud is rampant, we all know it, and government is too big to even get a handle on it.So now our hard earned tax dollars are not just being redistributed to some people who don’t want to work, but know how to work the system, but now we are paying for them to get “high on OUR dime!”

Hopefully Congressman Gosar’s bill will pass and some restraints will be put on this rampant abuse.If not, then we all may as well join a “Choom Gang”!

Biden: You can frack for natural gas but you can’t burn it
Hotair
Tom Cotton Absolutely Owns Reporter in Heated Exchange Over Media/Big Tech Censorship of Hunter Biden Story
Redstate