Housing Consistent With A Recession In 2020 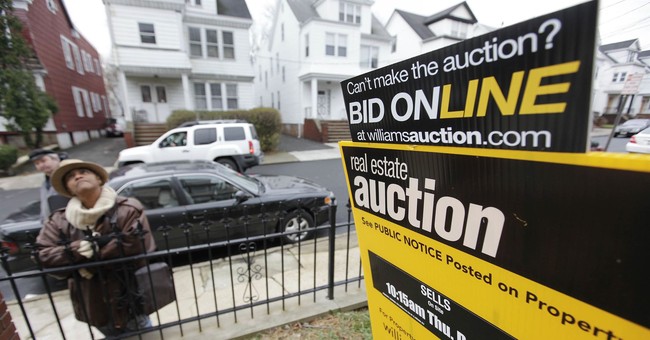 Consistent with earlier cycles, the average 30-year fixed mortgage rate has declined significantly even though a recession has not begun. Figure 1 updates the path of this long-term mortgage rate through the third quarter of 2019.2 The last observation of about one-half of one percentage point below the most recent three-year moving average is identical to the level one quarter before the onset of the 2001 recession and is just below the level one quarter before the 1990-91 recession. Hence, this indicator remains consistent with—though still does not guarantee—an imminent recession.

NOTES: The figure shows the percent difference between the current rate of existing single-family home sales (four-quarter average) and the average annualized sales rate during the previous three years (12 quarters).

The pace of existing home sales relative to their recent trend rate continued to slow during 2019. (See Figure 2.) Despite a modest upturn in the third quarter of 2019, this indicator remains firmly in the range observed prior to the 1990-91 and 2001 recessions. In contrast to the Great Recession, the decline in home sales since dipping below zero has been much more moderate.

Qualitatively, the recent behavior of inflation-adjusted home-price growth relative to its recent trend rate (shown in Figure 3) is very similar to the patterns of the two previous indicators—that is, it mirrors the run-up to the relatively mild 1990-91 and 2001 recessions and is unlike the pattern just before the Great Recession.

NOTES: The figure shows the four-quarter average contribution to real GDP growth minus the annualized contribution during the previous three years (12 quarters).

If any of the highlighted housing indicators hints at a departure from the typical recessionary pattern it is the contribution of residential investment to GDP growth. (See Figure 4.) Despite some improvement over the course of 2019, residential investment continued to be a drag on economic growth through the third quarter, albeit a slightly smaller one than before. Of all four indicators, this one most closely resembles the patterns seen before the two relatively mild recessions of 1990-91 and 2001 versus the more severe Great Recession.

The value of leading indicators—from housing variables to the slope of the yield curve—is that they offer an opportunity to prepare for a possible economic slowdown or outright downturn. A recent example is the Federal Reserve’s dramatic turn from a program of monetary tightening in 2018 to an easing of policy in 2019.

One hazard of leading indicators is that they can lead to misinterpretation and complacency. If the economic slowdown signaled by weakening housing indicators and some portions of the U.S. Treasury yield curve inverting in 2019 does not begin immediately, some observers may think the precautions undertaken in response to the signals, such as the Fed’s recent easing of monetary policy, can void the signals themselves and pre-empt a recession.

This would run counter to the historical patterns documented in this article: The Fed eased monetary policy and mortgage rates plunged in advance of each of the three previous recessions, yet the economy still went into a downturn. Thus, the value of leading indicators may lie more in their role as early warning signals that help us better prepare for, rather than outright prevent, a recession.

This time could be different, however, if the Fed’s timely interest rate cuts and other factors in fact help to prevent a recession in late 2019 or 2020. If that happens, we should re-examine the indicators that have been successful in signaling recessions in the past. In the meantime, we should not dismiss their salience.

Why Are Interest Rates Down?

This is certainly an interesting study and runs in sharp contrast to recent Fed statements that the economy is sound.

It's also in contrast to those who suggest lower interest rate will revive housing.

Rather, rates are down precisely because the economy is weakening.

But Guess What: Real Estate and Rental & Leasing are two of the sectors in contraction.

New home sales rose 1.3% in November but only because of huge downward revisions.

And here's another guess what: The St. Louis Fed Study came out a week before that massive downward revision in new home sales.

Also on December 23, I reported Economists Wrong on Durable Goods By an Amazing 3.9 Percentage Points.

Nine States in or Near Contraction

And please note that a Philadelphia Fed study projects nine states to contract in 2020.

So why would it stop at nine?

Other than that, everything is just dandy except, of course leverage, hedge fund record long bets on S&P 500 futures, valuations through the roof, a huge slowdown in Germany, capital controls in China, and a big signal from gold that something is very wrong.