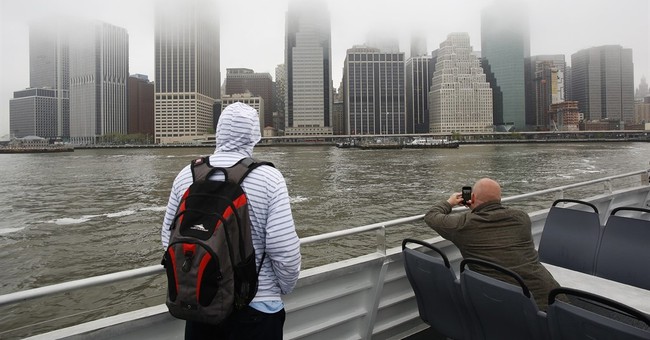 Manhattan is glutted with even more luxury condos than most apartment-shoppers realize. The borough has 7,050 unsold, newly built units, according to a report by Halstead Development Marketing. The bulk of those -- almost 6,000 -- haven’t been formally listed for sale, creating an under-the-radar “shadow inventory.”

The secret supply is a heavy weight on a market in which sales, especially of higher-end properties, have slowed to a crawl. It would take take 74 months -- more than 6 years -- to clear all of Manhattan’s unsold units at the pace of contracts in 2019, the report shows.

Despite the allegedly booming economy, there is little interest in moving to Manhattan. Rather, people have had enough of taxes.

This is not at all surprising. New York, California, Illinois, and New Jersey are in the same boat. Those are the top four states for domestic out migration.

Tax the Rich, the Rich Leave

The $10,000 limit has left governors in high-tax states steaming and has sent Democratic politicians scrambling to try to offer breaks to the same wealthy Americans they usually demand pay their fair share.

“It is having a big impact,” said Chris Edwards, tax policy director at the Cato Institute. “There was migration before, but there has always been disputes about the causes with the data. Now I suspect a lot of people are just getting fed up.”

The cap on state and local tax (SALT) deductions has already begun to drive some residents away from high-tax states like New York and New Jersey, but experts say that trend is only going to intensify.

“It took a few months for taxpayers to realize the dollar implications – until they actually filed their tax returns this year,” Alan Goldenberg, a principal at Friedman LLP, told FOX Business. “It quantified the impact of the loss of the SALT deduction when people saw it in front of their eyes on their tax return.”

The Tax Cuts and Jobs Act introduced a number of reforms, including the notorious $10,000 cap on state and local tax deductions, which has caused Americans to look into establishing legal primary residences in states where they can limit their liabilities.

Please note More People Are Leaving NYC Daily Than Any Other U.S. City.

New York leads all U.S. metro areas as the largest net loser with 277 people moving every day -- more than double the exodus of 132 just one year ago. Los Angeles and Chicago were next with triple digit daily losses of 201 and 161 residents, respectively.

In 10 of the top 100 metros, deaths exceed births. Thus, without migration these cities would be shrinking. Half of the 10 are located in Florida. In 11 more cities, mostly in Utah and Texas, there are more than twice as many births as deaths. Provo, which ranks first in births and last in deaths, had a 5-1 ratio.

Illinoisans Leave State in Record Numbers, and So Are We

I commented on the great exodus recently in Illinoisans Leave State in Record Numbers, and So Are We.

Here is one of the key charts.

You Say Goodbye, I say hello

Hello, hello, I know just why you say goodbye and say hello.

Escape Illinois: Get The Hell Out Now, We Are

On October 5, I announced Escape Illinois: Get Out Now, We Are.

We are moving to Southern Utah this year. Going house hunting in February (will rent for a year) and we will sell this one rather than trying to rent it.

Meanwhile, property prices in Illinois and New York are falling. California will soon follow. Falling prices will not stem the tide. People have had enough.

In case you were wondering, Illinois has a solution: Raise taxes.

Let's see what California and New York come up with, but I have a suspicion it will be the same.