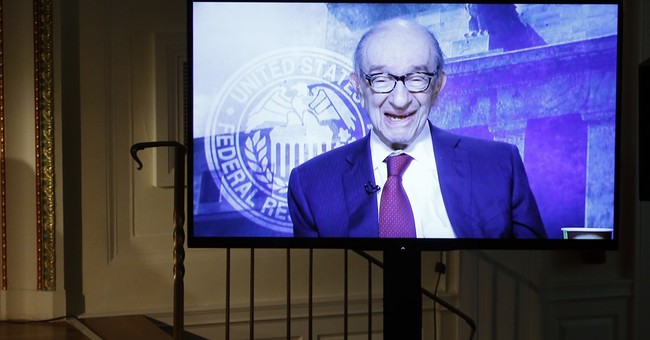 Greenspan has a spectacular history of being wrong.

Alan Greenspan told Bloomberg TV : "By any measure, real long-term interest rates are much too low and therefore unsustainable. When they move higher they are likely to move reasonably fast. We are experiencing a bubble, not in stock prices but in bond prices. This is not discounted in the marketplace.”

In a CNBC interview, the longtime central bank chief said the prolonged period of low interest rates is about to end and, with it, a bull market in fixed income that has lasted more than three decades.
“The current level of interest rates is abnormally low and there’s only one direction in which they can go, and when they start they will be rather rapid,” Greenspan said on “Squawk Box.”

On December 5, 1996 the Maestro warned of "Irrational Exuberance".

By the year 2000 Alan Greenspan embraced the "productivity miracle" of technology and no longer saw any bubbles.

Former Federal Reserve Chairman Alan Greenspan says he wouldn’t be surprised if U.S. bond yields turn negative. And if they do, it’s not that big of a deal.

Curiously, we had a bubble with interest rates well north of 2% but now 0% would not be surprising.

For discussion of why the effective lower bound of interest rates may be much higher than zero, please see In Search of the Effective Lower Bound.

Just as Sweden and others are questioning negative rates, Greenspan embraced them.

And thanks for the heads up on a recession.