Why Should Johnson Trust Macron Or Vice Versa? 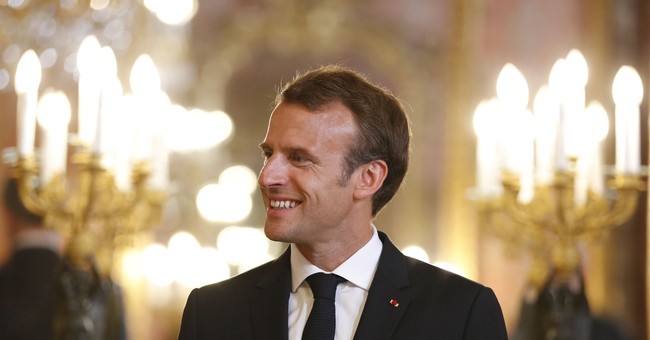 In France Says Brexit "Pressure Must Be Maintained", I made the comment “We do not know if France is buffing on No Deal. Nor does anyone else, except perhaps Johnson.”

One person replied "You honestly believe that Macron will be on the level with Johnson?!"

"The last thing Macron wants is the UK remaining and blocking his eurofederalist agenda. France would survive a no-deal far better than Germany, and Germany is effectively leaderless at present - an ideal time for Macron to galvanize the EU with his vision of a true political, economic and military union, a United States of Europe."

France indeed wants this settled. That France is bucking the entire rest of the EU is ample proof.

What the hell is Johnson's agenda?

In case you have not figured this out, Johnson has a single focus: Getting reelected.

Macron cannot trust Johnson on many things, after all, Johnson threw DUP under the bus.

However, there is one thing you can nearly always count on: In the end, politicians will do anything and everything to get elected or reelected.

The only exception I am aware of dates back to the 1840s when Henry Clay announced "I would rather be right than president". Indeed, that likely cost him the presidency.

So, there you have it: Mutual trust between Macron and Johnson has an exceptionally solid foundation as the primary political interest of both sides is nearly identical.

Simple
They do not want No Deal

It is amazing to me that people believe there is no difference.

A: Explained fully above

Q: How does this deal differ?

A: Answered in the Tweet above and points added below

It amazes me that bright people cannot see this.

A WTO deal is still in play. So is a customs deal, supposedly. But the latter happens only if Corbyn wins.

The backstop trap has vanished.

One can make a good case that No Deal is better yet.

Indeed, I favor No Deal.

But one must factor in political reality: No Deal was not a straight-up option for Johnson.

What would have happened if the courts sided with Johnson?

The most likely result would have been a caretaker government, not led by Corbyn, but rather Ken Clarke, the "Father of the Commons" and only Tory to vote against triggering Article 50.

Clarke likened Euroskeptics’ post-Brexit visions to a “wonderland-type” fantasy, saying “apparently you follow the rabbit down the hole and you emerge in a wonderland where suddenly countries around the world are queuing up to give us trading advantages.”

In case you missed it, Ken Clarke threatened to pass an amendment allowing 16-year-olds to vote on the presumption they would vote Remain.

I discussed that setup in EU Postpones Brexit Extension Request, Be Careful of What Story You Believe.

NEW: Ken Clarke says if the PM presents a one line bill calling for an election (remember he needs a way round that Fixed Term Parliaments Act), then MPs will amend it. For example, to reduce the age of voting to 16. Snap election might not be so easy for PM after all.

The number of ironies we have seen in this three-year ordeal have been staggering.

Here is the point the hard core Brexiteers and Remainers need to understand.

Those are the political fact of the matter.

Johnson understands, so do I, and so does ERG who reluctantly backed Johnson's deal. The alternative was likely Clarke. SNP and the Liberal Democrats were openly campaigning for Clarke.

It was only Corbyn's insistence (and arrogance) that he and no one else lead a caretaker government that stopped Clarke. However, had Corbyn's only option been Clarke, I believe he would have caved.

Thus, by working out a deal, Johnson stopped Clarke.

Not only did Johnson stop Clarke, Johnson's deal stopped the return of Theresa May's deal, a fate worse than staying in the EU.

Many Labour MPs no doubt regret not supporting May's deal.

Few seem to get the crucial point about Clarke, especially Nigel Farage and the unbending No Deal bloggers.

I emphasized "seem" for a reason.

Do not rule out the possibility that Farage gets this too, and has really worked out a deal with Johnson once an election is triggered.

For political purposes, and to make an election more likely, Farage and Johnson must appear as if they are on different sides.

Moreover, even if they are not working together now, if election odds change, Johnson will change too. Thus, Johnson kept Farage in play, even if only on the back burner.

Those who said Johnson would lose votes by his tactics have simply been flat out wrong.

The Liberal Democrats have to be getting antsy here. If France holds firm and this is resolved via supporting the Withdrawal Agreement, Remain vanishes except via Corbyn's wish-washy strategy.

The Liberal Democrats and SNP want an election before this is settled. This puts Corbyn in a box if France holds firm

Yet, a Johnson win of any size, keeps No Deal in play!

I discussed why in January Brexit Extension Increases Chance of No Deal.

In light of the above political realities and ironies, Johnson deserves praise and nothing but praise for what he has accomplished!

With one or even two hands tied behind his back, Johnson worked out a deal despite the above. He even managed a side deal with Macron (based on mutual trust) to prevent point 3!

Politicians like Farage, with no election to lose, and bloggers who have no idea how hard it was for Johnson to walk an extremely fine line to avoid Clarke while working out a deal that EGG could support, simply do not understand masterful work when they see it!

I did not see the following Tweet until after I published the above article. The Tweet is in reference to my comments above: "The Liberal Democrats have to be getting antsy here. ... The Liberal Democrats and SNP want an election before this is settled. This puts Corbyn in a box if France holds firm."

The Lib Dems have drawn up a bill that would allow Johnson to secure a December election with a simple majority of MPs. Crucially, the SNP will back it.

Johnson may go along with that bill or submit it himself then withdraw it (or withhold support if submitted by the Lib Dems) if Clarke modifies the bill to allow 16-year-olds to vote.

If the SNP initiative were to succeed, that would lead to Parliament being dissolved this week and an election on 5 December - a week earlier than Johnson wants.

That's quite amusing. The sooner the elections, the more advantageous for Johnson.

Not SNP
Not Liberal Democrats
Not Tories
Not Labour MPs who truly want to deliver brexit.

I salute the efforts of Macron.

The best scenario for Johnson is an early election.

Things can still go wrong but as long as France holds, Johnson wins.https://t.co/jnnZCrn8xM

Hmm. It appears I have my own "live blog" running here. This is the 5th or 6th addendum item.

And I understand the skepticism of @TFL1728

But with SNP and Lib Dems now on board (if accurate) why would Macron?

If anything, Macron now has more reason to hold firm.https://t.co/jnnZCrn8xM https://t.co/aHQAs0krAo