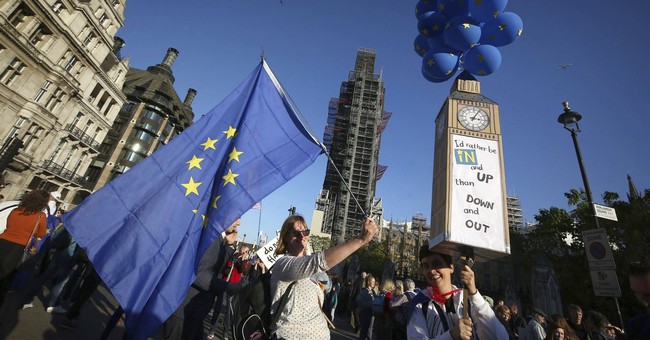 Here are eight reasons the EU will suffer more in both the short and long term.

Note that one of the EU's biggest complaints against Ireland now is the "unfair" corporate tax structure of Ireland.

A falling currency is good for exporters and bad for importers. The British Pound has been falling in anticipation of Brexit.

In the event of no deal, WTO tariffs kick unless the EU offers to work out a trade deal. Under WTO rules, the EU could do that and rules allow a lengthy 10 years to get it done. The EU should agree to do that, but with animosity rising, it probably won't.

In a rising tariff setup, exporters will suffer far more than importers. Germany has an enormous trade surplus with the UK.

Angela Merkel is very concerned about German exports as well she should be.

Throw in the increasing chance of Trump putting tariffs on German cars and the EU will get crucified. A very severe German recession is in the cards and the EU faces a double whammy of Brexit plus Trump.

Note that a falling currency will mitigate some of the Tariff damage on UK exporters while compounding the problems for the EU.

In Brexit, the UK halts all EU fishing rights. EU fishermen will get clobbered.

The UK will be able to make its own trade deals and set tariffs how it pleases.

The UK will finally be free of inane EU rules and regulations on basically everything but especially agriculture.

Some dispute this, but the UK can halt the Brexit breakup fee. Boris Johnson has threatened to do that. Regardless, the UK will stop paying into the EU coffers even it does pay the breakup bill. The EU has budgeted for UK payments. When the UK stops paying, the EU will have to raise taxes to cover the difference.

Both the EU and UK will suffer in the event of no deal but the long-term consequences strongly favor of the UK.