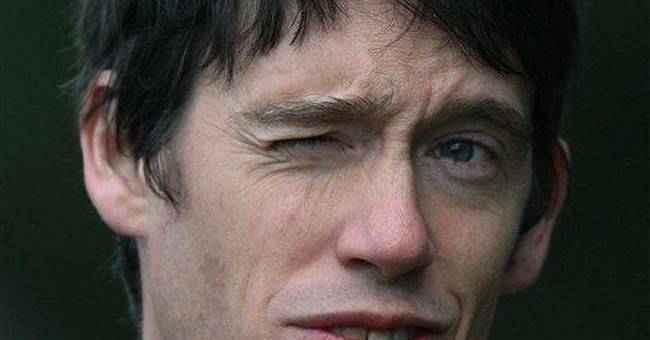 Rory Stewart, the surprise star of the Tory leadership election, has said he would help organise an “alternative parliament” in order to stop a no-deal Brexit if the new prime minister tried to prorogue parliament in order to bypass MPs’ wishes.

Stewart said a former Speaker, such as Betty Boothroyd, could be enlisted to oversee a parliament continuing to sit in defiance of Boris Johnson if he presses ahead with a no-deal Brexit by seeking to prorogue the Commons, or to use some other “constitutional manoeuvre which means whatever legislation parliament tries to pass does not bind his hands”. He said any plan to prorogue parliament, an option still entertained by Johnson, would be a constitutional outrage.

Setting up an alternate Parliament with no legal authority to do so would be the "constitutional outrage".

In other laughable maneuvers, Stewart says he will restart his “Rory walks” tours around the country. He admits, with his trademark candour: “I am still thinking this through.”

Rory Stewart, the much-hyped Tory leadership contender, plans to counter a hypothetical prorogation of parliament by setting up an alternative parliament - essentially in a pub down the street. We don’t think that prorogation is likely in any case, and so we don’t feel we need to think this through to the end. But we are wondering whether Stewart and other Remainers in the Tory party are well-advised to indulge schoolboy fantasies of staging a rebellion, instead of focusing on the options that are available to them under EU law. The treaties allow for ratification of the withdrawal agreement or unilateral revocation as the only tools to stop a no-deal Brexit. They need to choose. The Remainers' leap into the procedural fog benefits the Brexiters.

The problem is that the Remainers disagree both on what they want - some want revocation, other don’t - and on how to achieve it. The 30 or so Tory rebels are not all going to support a no-confidence vote brought by Jeremy Corbyn. So it is not clear to us how they can proceed. If the government were to lose its majority, then surely there will be elections at some point in the autumn.

From a strategic point of view, we much prefer the approach suggested by Will Hutton in his Observer column. He is calling on Labour not only to endorse a second referendum but to seek an electoral alliance with the LibDems so that voters have a single pro-Remain candidate on the ticket. We don’t support a second referendum ourselves, and believe the EU has no interest in another year of uncertainty that such a process would produce.

From a strategic pint of view, it might equally be wise for the Tories to form an alliance with the Brexit Parrt.

Johnson ruled it out, but he could easily rule it back in.

Even if one believe the jump in the most recent poll for Labour, it was at the expense of the Liberal Democrats.

In terms of a coalition, the last three polls put a coalition at 40%, 38%, and 39% respectively. And there is a huge block of Labour voters in favor of Brexit. Put another referendum on the ballot and the coalition would likely get crushed.

All those in the Brexit Party would certainly vote against another referendum. Nearly all the Tories would as well.

Some Tories might shift, but Labour would lose more.

Brexit is a Done Deal

Brexit is a done deal.

Eurointelligence commented: "We would not rule out that Boris Johnson returns with an amended deal. If he does, Remainers should vote in favour of it. We have argued before that they should accept the withdrawal treaty and then begin a long campaign for re-entry."

Eurointelligence needs to look at polling math to see how ridiculous their idea of starting another campaign to get back in really is.

A coalition to do so right away would get crucified. If they wait, the UK will have made other treaties, and the chance long gone.

Either way, Brexit is a done deal.

The UK parliament has little say in the outcome.

The EU will offer a deal or it won't. And if it won't, the EU may still agree on a long interim trade deal coupled with a temporary arrangement on the backstop. The latter is what I expect.