What Are Remainers' Chances Of Ousting Johnson And Stopping Brexit? 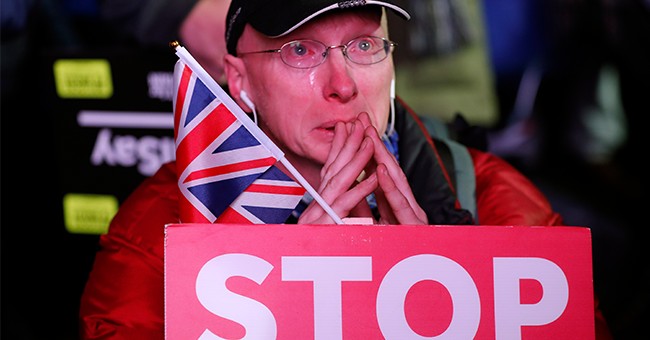 Jeremy Corbyn made a fool of himself today by telling Theresa May that Any Brexit Deal Should be Put to Public.

Her response, as reported by Andrew Sparrow at the Guardian Live was amusing:

She says she wanted to leave the EU on 29 March. If Labour had voted for it, “we would already be out.” She says she had voted for a deal three times, while Corbyn had voted against the deal, increasing the chance of no deal. She says the Tories are not divorced from reality; the person most divorced from reality is Corbyn himself, who wants to follow the Venezuelan economic model, she claims.

Ken Clarke now says he could vote against in a no confidence motion - our editorial today ?@EveningStandard? reveals that the Cabinet Secretary has told Theresa May to consider carefully her advice to the Queen on who she should appoint as PM. https://t.co/ZDZFaEmbu8

Sparrow responded: "The monarch has not had the power to sack the prime minister, and appoint another one, for at least a century, and probably longer. And she does not have the power to request an article 50 extension, even if she wanted one."

In response to a question about MPs requesting an extension Sparrow replied "There is no provision for parliament to request an article 50 extension. The request to the EU would have to come from the PM."

Also note that the EU cannot grant an extension unless the UK asks and the EU might not do so anyway. Extensions have to be unanimous and France is sick of this mess.

Not going to happen

Not going to happen except following an election and most likely not even then.

Elections are the one legitimate chance that Remainers have of stopping Brexit. But the timeline is very critical given the legal default is Brext on October 31.

Following a successful motion of no-confidence, Tories would have 14 days to find a replacement for Johnson. They would fail and elections would take place.

There is a 25-working-day minimum period of time for elections following dissolution of parliament.

September 11 is the last possible day in which elections can halt Brexit. Even then, the next PM would have to immediately ask for an extension and then immediately get a unanimous affirmation from all 27 EU nation.

Theresa May has agree to take final questions from MPs.

This means the new prime minister would take office the night before recess, meaning he probably would not face MPs for the first time until September.

September 3-11 is the maximum theoretical window in which a motion of no confidence must take place, and be successful to have any chance of stopping Brexit.

Johnson will take questions from MPs on Tuesday, September 3, assuming he does not prorogue Parliament (delay the opening) until it is too late to stop Brexit.

Let's assume Johnson does not take that measure.

He will deny he is committed to leaving with no deal. He will officially take the same stance as Hunt or Gove who both said they would negotiate with the EU.

Corbyn may initiate a motion of no confidence. There would then be a three-line Whip (compelling party members to vote with the party or be outed).

Anyone defying the Whip would be outed from the party. This applies to Labour as well. Many Labour MPs support Brexit.

It is not at all clear that a motion would be successful.

Assuming the motion is successful, It's not at all clear that elections would be be held in time, or if they were, who would win.

Yes, that's all it takes, assuming my time window is correct.

The intial September 3-10 trigger requirement may allow more time than there really is.