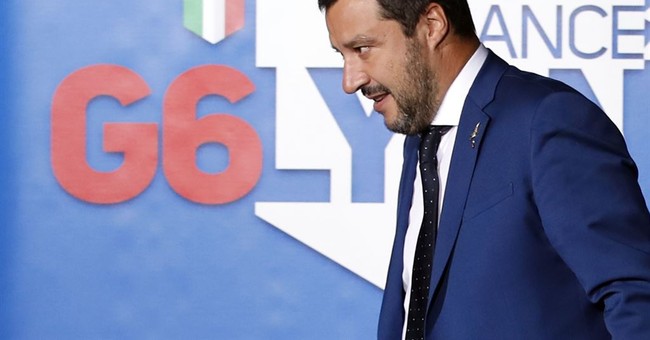 Italy's is on a collision course with the EU in two different ways. The first regards Italy's budget.

Outgoing European Commission President Jean-Claude Juncker warns Italy faces an "Excessive Deficit Procedure" and may be fined billions of euros. No country has ever been fined. This is the first time a country has faced such a ruling.

France regularly breaks the deficit rules, but "France is France" as Juncker once stated.

While everyone is talking about Italy and its budget deficit, France has not had a balanced budget since the late 70s, pic.twitter.com/UXRKAjWsGS

What has the EU hopping mad is Italy's massive debt-to-GDP ratio, which it wants Italy to shrink. But Italy is already in recession, shrinking the debt would be political suicide.

At some point, Italy's government will collapse.

Its technocrat Prime Minister, Giuseppe Conte, wants to honor the rules, but he is not really running the government.

Salvini did very well in the European parliament elections and many speculate he will trigger elections soon to get rid of di Maio and Cointe.

For now, we have the strange case of deputies Salvini and di Maio at odds with Conte and the Economy Minister, Giovanni Tria.

Conte threatened last week to resign last week and he could do so at any time. "I want a clear, unequivocal and speedy response," Conte said, calling for "loyal collaboration" from all ministers.

The Italian government insists that it can meet its 2.04% deficit target, but an increasingly skeptical European Commission projects that the figure will be closer to 2.5% – a point of contention that appears likely to reach an inflection point between by mid-week when officials from the EU-28 meet in Brussels to approve a European Commission report confirming that Italy is in breach of bloc’s fiscal compact.

Earlier in June, the Italian parliament unanimously approved the introduction of a promissory note” known as a mini BOT that can be used to pay taxes and would be issued in denominations equivalent to the euro and with an expiry date, much like traditional banknotes. The plan was drafted by Lega, one of the two governing coalition members in the Italian government.

The country’s economy minister, Giovanni Tria, came out against the plan, however, saying on 8 June that is was either “illegal” or “useless”. His view echoed that of European Central Bank head, Mario Draghi, who dismissed BOT bills as either a “second currency” – which is illegal under EU law – or additional public debt.

Both Lega and their coalition partner, the Five-Star Movement, have made clear that Italy will not under any circumstances begin to implement austerity or fiscal consolidation measures at this time.

Draghi and Tria branded the MiniBot as either illegal or useless. Draghi commented,

“Mini-BOTs are either money and then they are illegal, or they are debt and then the stock of debt goes up. I don’t think there is a third possibility.”

It would be illegal if Italy mandated acceptance of the currency. However, Italy aims to skirt illegality by not requiring any merchants to accept them. The government will accept the notes as payment in taxes so they will have a bid.

The key point in the discussion and the third possibility that Draghi misses is once the MiniBot is in place and accepted, it would be easy for the Italian government to flip a switch and require its usage.

Rather than hop out of the Eurozone in one swift move, the Mini-BOT provides a transition.

Not having a transition is one of the things that did in Greece.

Greece's second major problem was it had no way to pay interest. Italy, despite its massive debt load, can at least pay interest.

I Don't Govern A Country On Its Knees

The Telegraph discussed the setup in Italy to Activate its 'Parallel Currency' in Defiant Riposte to EU Ultimatum.

“I don’t govern a country on its knees,” said Matteo Salvini after sweeping the European elections even more emphatically than the Brexit party.

“We’re not Greece,” said Claudio Borghi, Lega chairman of Italy’s house budget committee. “We are net contributors to the EU budget. We have a trade surplus and primary budget surplus. We don’t need anything from anybody. And we are in better shape than France.”

“I am not going to hang myself for some silly rule,” said Salvini. “Until unemployment falls to 5pc we have a right to invest. We have regions where youth unemployment is 50pc. We need a Trump cure, a positive fiscal shock to reboot the country.” His plan is a €30bn boost led by a flat tax of 15pc.

About one year ago, I commented a Reader From Italy Chimes in on the "Minibot" Parallel Currency Idea.

Hello Mish
Regardless of anything else: Italians are masters in finding smart ways to circumvent rules. There is even an adage in Italy regarding this.
On that basis, I would not be surprised if at one point in time, someone in Brussels or Frankfurt will realize too late precisely what is happening. .....

This was my reply to reader "AC":

Germany gets to decide between debt mutualization or a breakup of the Eurozone and Italian default on Target2 imbalances. The only other possibility that comes to mind is the ECB prints enough to backstop Target2.

To prevent Beppe Grillo and his 5-Star movement from coming into power, Italy changed its election rules to give coalitions more power than parties.

The result is Salvini might win so much support in the next election that he may have a super-majority in Parliament so as to not need a referendum to launch the mini-bot parallel currency.

Salvini can force snap elections at any time. But right now, both he and co-deputy di Maio are on the same side of the Mini-BOT fence.

Italy owes creditors close to half a trillion euros in Target2 liabilities. If Italy defaults, it will pay back claims in the Mini-BOT, if at all.

Good luck with that, ECB.