May Tries To Please Both Sides, Loses Support From Both 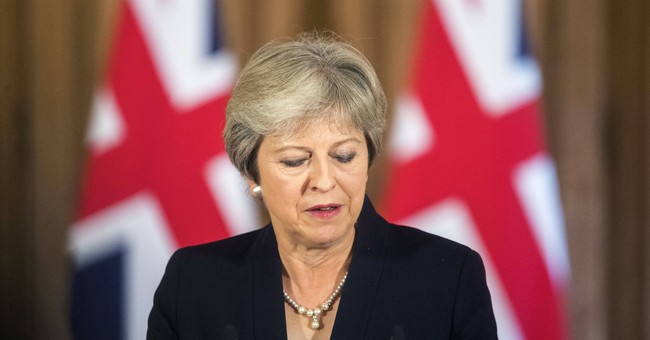 Theresa May just won't give up, and she looks like a complete fool in the process.

May offered changes on the customs union (that the EU would have to agree with), and to please Remainers, she promised the "possibility" of a referendum.

The end result is she lost support from both sides judging from the responses in the Guardian Live Blog and Tweets.

There are now 44 rebels

10 switchers who backed May last time but now oppose:

With great reluctance I backed MV3. Now we are being asked to vote for a customs union and a second referendum. The Bill is directly against our manifesto - and I will not vote for it. We can and must do better - and deliver what the people voted for.

Not Brexit - Worse Than Before

I supported the dreadful WA before as I thought it was our only chance of leaving the EU on 29th March. The WAB proposal is worse than before. This is not Brexit and I won’t be supporting it.

One minister says May has achieved something - ‘how to take something bad and make it truly worse’ - another minister told me even before speech bill shouldn’t be tabled, more will make that point now

Guardian Comment: There is a rule in journalism that, if someone frames a headline in the form of a question, it is normally best to assume the answer is no. But in this case, if you read Laura Kuenssberg’s blog, you will find that this is a rare example of a question mark being used to understate what an article is saying, not overstate it.

Did the PM just make it worse? https://t.co/0z3bjVwDeM

Guardian Comment: Theresa May could afford to lose some Tory MPs who previously backed her agreement if, at the same time, she were picking up more Labour MPs. But there is no evidence that she is. If anything, it’s the opposite. The Labour MP Lisa Nandy is one of the backbenchers Downing Street hoped might be won over. Nandy was a strong supporter of the Gareth Snell amendment that the government has adopted. But, according to ITV’s Paul Brand, Nandy is still opposed to the bill.

NEW: @lisanandy tells me without further assurances she cannot vote for PM's new deal - promises around customs are a blank cheque. Hard to see who Theresa May has pleased today.

At our regular ERG meeting, Geoffrey Clifton-Brown confirms he will now vote against the deal.

There is no doubt the Prime Minister’s speech today has worsened the situation.

In a clip for broadcasters Jeremy Corbyn said Labour could not support this bill because it was basically a “rehash” of what had been offered before.

The prime minister’s proposal tonight seems to be largely a rehash of the government’s position in the cross party talks that failed to reach a compromise last week.

On key elements - customs, market alignment and environmental protections - what the prime minister calls her new Brexit deal is effectively a repackaging of the same old bad deal, rejected three times by parliament.

We will of course look seriously at the details of the withdrawal agreement bill when it is published. But we won’t back a repackaged version of the same old deal - and it’s clear that this weak and disintegrating government is unable deliver on its own commitments.

Sir Vince Cable, the Lib Dem leader, has put out this statement in response to Theresa May’s speech. He said:

The prime minister’s last ditch attempt to get her withdrawal agreement through the Commons without a confirmatory referendum attached is doomed to failure. Her authority is draining away.

Unless and until the government concedes that a people’s vote must be in the legislation, she will not win our support.

The People’s Vote campaign has dismissed Theresa May’s offer to let MPs have a vote on a second referendum. It has put this statement from the Labour MP Dame Margaret Beckett, who supports its campaign. She said:

The prime minister’s last-ditch effort to force through her deal is no more likely to succeed than her previous attempts.

Today she tried to spice up the same old deal with a series of supposedly new concessions, but then admitted she had no way of guaranteeing that she could deliver any of them.

MPs will be rightly weary of offers from a Prime Minister who is about to resign and will probably be replaced by a hard-line successor. It would be very dangerous to vote through a deal to leave the European Union without any clear idea of our eventual destination – a blindfold Brexit that would only prolong uncertainty for families, businesses and parliament.

Responding to Theresa May’s speech, Nigel Dodds, the DUP’s leader at Westminster, said the “fundamental flaws” with her deal remained.

If @theresa_may is now supporting a Second Referendum, it makes it very hard for me to support the latest #WAB when it comes to @HouseofCommons . This is a betrayal of the 2016 referendum and a betrayal of everything she has been saying since she became Prime Minister: https://t.co/nDzOmNf100

I supported the PM’s rotten deal last time as I felt we could then draw a line and select a new PM to pick up the pieces.
But I cannot support this convoluted mess. That it takes us towards a rigged referendum between her deal and no Brexit is just grotesque.
The PM must go.

It takes special talent to take something horrendously awful and make it worse.

Theresa May took something that was 30 votes away from passage and now appears to be 100 or more votes short.

Biden’s “bipartisanship” bumbled: GOP’s centrists reject massive new COVID relief/stimulus package — after not being consulted
Hotair
Ken Cuccinelli: Nancy Pelosi Had a Disturbing Request for What She Wanted the National Guard to Do
Redstate