Theresa May Will Not Stand Down: Will The Men In Gray Suits Forcibly Remove Her? 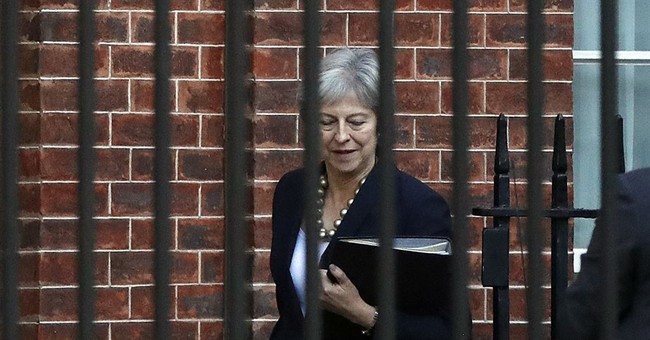 Like waving a flag in front of a bull, May taunts the 1922 Committee. They have to change the rules to get rid of her.

The "men in gray suits" comment is a reference to the 1922 committee.

Although 80% of Tory MPs want May out, it's the 1922 Committee that sets the rules. Yesterday, Sir Graham Brady, head of the rules committee issued an ultimatum: Pick Your Resignation Date or We Will.

The committee cannot pick a resignation date, but it can change the rules and hold a leadership challenge vote.

May Taunts the Committee

Today we learn, Theresa May Rebuffs Fresh Calls to Resign.

Theresa May has no intention of setting out a fresh timetable for her departure, Downing Street has signalled, with a spokesman insisting she is determined to “get Brexit done”.

The spokesman dismissed calls from Conservative backbenchers for the prime minister to step down, saying she had already “made a very generous and bold offer” to the 1922 Committee of resigning if her Brexit deal is passed.

May's offer was not generous. Her deal, which potentially might keep the UK permanently trapped in a customs union would not deliver Brexit.

The Corbyn compromise effort is even worse.

There is no guarantee May would actually stand down. Rather, it may very well have come to the same place: change the rules and vote her out or wait until the next opportunity in December. Thus May's offer was blackmail and not even enforceable.

Her deal-in-the-works with Labour Leader Jeremy Corbyn is even worse. It would be better to remain.

Brexiter sources on the committee have said they are increasingly confident they may have enough support to remove the time limit, after a previous ballot went narrowly against changing the rules.

However, it is not yet sure to pass, nor is it certain that Tory MPs would vote by a majority to remove May; many soft Brexit supporters would rather she had passed a deal in order to prevent her successor campaigning for a no-deal departure from the EU.

If indeed 80% of MPs want May out, the math is seemingly present. The Remainers will all vote in a block against removal, but there are not enough of them. The open question is how many in the soft-Brexit group will vote not to remove May.

Then, one might expect a motion of no confidence by Corbyn to remove that person. If successful, general elections with an unknown outcome would be in the cards.

That's the real danger for both sides. Polls now are not reliable.

Theresa May is now in bed with Jeremy Corbyn in a futile attempt to come up with a deal that honors the spirit of Brexit.

May has already crossed red lines, and Corbyn demands more. The customs union that Corbyn seeks is worse than remaining. His preference is an arrangement in which the UK would have to abide by EU rules without have any vote on those rules.

Meanwhile, May will not stand down without a deal unless she is forcibly removed.

She needs a new slogan: Any deal is better than no deal.