In a surprise announcement, the Swiss National Bank abandoned its silly policy of defending a peg to the euro.

Previously, the bank had set a line in the sand, defending the peg at all costs. That policy meant Swiss accumulation of hundreds-of-billions of euros that today plunged in price. 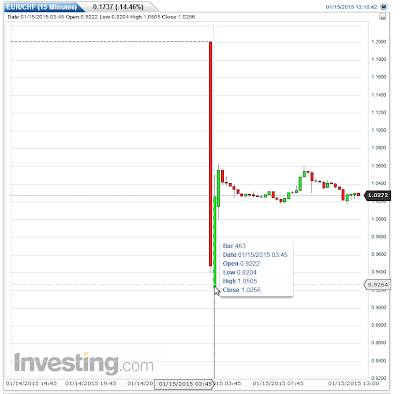 As the above chart from Investing.Com shows, the Euro soared in value from 1.20-per-euro all the way to 0.82-per Euro.

One week from today, the ECB is expected to announce a massive €1 trillion QE intervention. If the euro declined as expected, the Swiss National Bank would have to accumulate billions more euros to defend the peg.

With that, the Swiss National Bank finally threw in the towel on the euro peg that it promised just last month would defend with "the utmost determination".
CARTOONS |  Close to Home
View Cartoon

The Financial Times has some interesting comments in Swiss Franc Rockets as Currency Ceiling Scrapped.

The SNB’s decision highlights the difficulties that central banks of smaller economies such as Switzerland and the UK face as they navigate the turbulent waters between the US Federal Reserve, which is closer to tightening monetary policy, and the ECB, which is poised to loosen it.

It also marks a dramatic volte-face for the SNB, which insisted as recently as December that it remained committed to preventing the franc from strengthening beyond SFr1.20 to the euro, adding that it would enforce the policy with “the utmost determination”.

Thomas Jordan, chairman of the SNB’s governing board, defended the decision though, saying that once it was clear that the policy was no longer sustainable, it was important to act quickly. “It is better to do it now than in six or 12 months when it would hurt more,” he said.

Simon Derrick, chief market strategist at BNY Mellon, said that the SNB had clearly anticipated a huge surge of inflows into Swiss franc assets in the coming days and “saw little reason to provide buyers with an artificially cheap rate”.

Anyone recall my frequent comments about currency intervention?

In this case, the Swiss National Bank is no longer willing to follow the euro further down the rabbit hole. Can you blame them?

Switzerland’s foreign exchange reserves have swelled dramatically since the SFr1.20 target was introduced. At the end of December they had reached SFr495bn — or almost 80 per cent of Swiss economic output — up from SFr257bn at the end of 2011.

Lessons for Polish and Hungarian Borrowers

Borrowed money in Swiss Francs? If so you are now in serious trouble. Please consider Swiss move hits Polish and Hungarian borrowers.

The abrupt move by Switzerland’s central bank to abandon its policy of restraining the franc sparked a financial rout on Thursday in Poland and Hungary, where hundreds of thousands of mortgages are priced in the Swiss currency.

Hungarian borrowers will be shielded from a nearly 25 per cent surge in repayment costs, thanks to a conversion programme introduced by prime minister Viktor Orban in November to protect borrowers from foreign exchange risks.

By contrast, the more than €30bn worth of Polish mortgages tied to the franc enjoy no such protection. Citibank estimated that the various currency moves would increase Poles’ average repayment costs for franc-denominated mortgages by 17 per cent, which could boost the rate of non-performing loans from its current level of about 3 per cent.

This sparked concerns among lenders on Thursday that public anger could ultimately force Warsaw to try to enact a similar measure retroactively.

Swiss franc denominated credit accounts for about 8 per cent of Poland’s total bank assets, but 37 per cent of its total home loans, making it a potential political issue with a general election set to take place in nine months.

Morals of the Story

For a discussion of why QE will doom Europe, please consider Steen Jakobsen Warns "Euro is Not a Good Idea and ECB About to Make Biggest Mistake in History"

Gold is up about $25 dollars today, an arguably muted response but certainly in the appropriate direction given all the central bank foolishness that is doomed to fail.