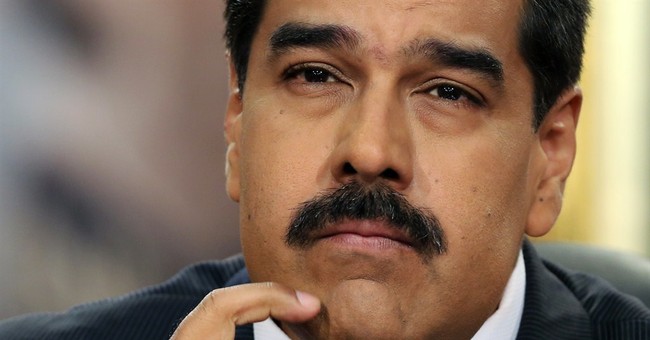 Those looking for hyperinflation can find it in Venezuela. Here's the question of the day: How bad is Venezuelan inflation and how bad can it get?

Venezuela President Nicolas Maduro, set to announce a new currency system today, needs to devalue the bolivar or risk inflation passing 1,000 percent as soon as next year, according to Bank of America Corp.

Under the current system, Venezuela’s overvalued bolivar means that the government effectively sells the dollars it gets from oil exports at a discount, compelling policy makers to print extra currency to cover domestic spending needs. Currency controls that limit Venezuelans’ access to dollars have spawned a black market in which the greenback fetches 172 bolivars, compared with officially sanctioned exchange rates that range from 6.3 to about 50 bolivars per dollar.

“If we don’t see a large adjustment of the exchange rate, we’re almost certain to have triple-digit inflation and I wouldn’t be surprised to see the economy veering into four-digit annual inflation,” Francisco Rodriguez, the chief Andean economist at Bank of America, said by phone from New York on Dec. 28, before Maduro scheduled his announcement. The government “needs to print money to finance the deficit and it is running a deficit because its revenues in bolivars are too low.”

Maduro said in televised speeches earlier this month that he saw no need to cut the government subsidies that leave gasoline selling for 6 cents a gallon, and that he will keep a 6.3 bolivar-per-dollar fixed exchange rate for priority imports.

The most recent official data is that annual inflation in Venezuela was 63 percent in August, the fastest in the world. A more up-to-date estimate based on the depreciation of the bolivar on the black market is 183 percent, according to Steve Hanke, a professor of applied economics at Johns Hopkins University and director of the Troubled Currencies Project at the Cato Institute.

The bolivar weakened 42 percent on the black market in the fourth quarter, according to data from dolartoday.com, outpacing even the 29 percent decline in the Russian ruble. Both currencies have been pressured by declines in price of oil, which makes up 95 percent of Venezuela’s exports and is the country’s principal source of hard currency.

With no access to international capital markets and falling revenue from oil sales, Maduro is dependent on loans from allies or on printing more money to plug his growing budget deficit.

“If they continue with their social welfare and income redistribution programs, they’ll be forced to run the printing press at an ever accelerating rate,” Hanke said. “There is tremendous pressure on them to keep spending and their sources of financing have dried up.”

Venezuela’s M2 money supply, a measure of the amount of bolivars in the economy that includes bank notes in circulation as well as retail savings, rose by 64 percent in the past 12 months. That is three times as fast as any other country tracked by Bloomberg.

The Bloomberg headline "Venezuelan 1,000% Inflation Seen by BofA Without Weaker Bolivar" is rather curious given a weaker bolivar and Venezuelan inflation go hand in hand.

However, the article explains Venezuela is bleeding foreign reserves in an effort to defend the official exchange rate and also to provide subsidies.

Selling gasoline at 6 cents a gallon is ridiculous. Can anyone really get gas at that price? If so, how much? Black market siphoning of gas to sell at higher rates elsewhere has to be going on.

Regardless, and as I have pointed out before, foreign reserves and hard cash from oil sales are the only things preventing a total collapse in the bolivar.

Once reserves are gone, there will not be merchandise in stores at any price, let alone the nonsensical official rate of 6.3 bolivars per dollars.

The black market rate of 172-per-dollar vs. the official rate of 6.3-per-dollar is a decline of 96.34%. That's not not as bad as Zimbabwe, but Maduro is surely trying.