Writing is on the wall. It says, Ukraine is increasingly likely to split in two. Recent events appear to have sealed that fate.

Allow me to chime in on another election. On November 2nd, the Donetsk and Lugansk Peoples' Republics held elections to basically validate the existing, Moscow-backed rebel leadership that has come to the fore since roughly July-August of this year. The turnout was incredible, considering that many residents of battered frontline towns braved potential artillery fire to get to the polling stations.

On a symbolic note, the elections were held exactly six months after the May 2nd massacre of 40-some pro-Russian demonstrators in Odessa, for which, incredibly, no one has yet been indicted. (Several "investigations" were quietly abandoned months ago, as they were likely pointing to prominent nationalist groups in Kiev.)

Naturally, the EU and U.S. State Department are not happy with these elections, although they were quite happy with the Ukrainian parliamentary elections of October 26th, in which turnout was as low as 30% in some areas as parties more popular in the south and east were too intimidated to campaign or were simply banned.

In other news, Ukraine's Prime Minister Yatseniuk recently stated that Ukraine is open to buying coal from the rebel areas. This is a sign of desperation, which shows that buying coal from overseas (chiefly from South Africa) has not saved the day as there is simply not enough infrastructure to keep Ukrainian power plants continuously supplied with foreign coal. Also, some Ukrainian plants are specifically designed to burn certain grades of Donbass coal.

Already there have been many rolling blackouts and hot water cut-offs, and things will only get worse. Keep in mind that water flowing to apartment buildings (for both washing/cooking and central heating) in the former USSR is typically heated by coal. So you can expect Ukraine to have a very rough winter.

Yatseniuk also said that while Ukraine will continue selling electricity to the rebel areas, it will no longer be paying out pensions or any other benefits to residents of rebel-held areas until such time as these areas return to Ukrainian control.

Although Kiev had already minimized these disbursements since summer, Yatseniuk's statement is the most formal and and extreme announcement to that effect. This is a clear abdication of responsibility for the rebel areas as well as a de facto recognition that those people are no longer Ukrainians.

Note that Russia continued to pay benefits in Chechnya during its periods of de facto independence in the early 1990s and again in the late 1990s. Thus, there is precedent for continuing to treat people as your own citizens as you seek to return them to the fold. In this context, Kiev has just severed the last link that people in Donetsk and Lugansk may have had with the Ukrainian state. It is a scorched-earth policy as well as an admission of failure.

Reader Jacob Dreizin is a US citizen who speaks Russian and reads Ukrainian.

Here's an interesting video about who is responsible for shelling that kills school children. The video is from last summer, but translations have been added so the video is now understandable to those who speak English.

Finally, I have one more email from Jacob Dreizin to share. He believes another major rebel advance is in the cards this year.

Based on a long, detailed, and seemingly very authoritative (and conspicuously anonymous) contribution on Strelkov's social media page, which is sort of a mouthpiece for various elements of the rebel movement (much more so than even Colonel Cassad), I am thinking that there will be one more major rebel advance before winter.

[Mish note: "Strelkov" is the nickname for Igor Girkin, a Russian nationalist and former rebel commander.]

The piece does not go into specific geography, but the most likely target is the semi-encircled Ukrainian force in the Debaltsevo salient [Mish note: Debaltsevo is a city in the Donetsk Oblast (province) of Ukraine.] Cutting it off completely and then reducing it as was done with other "cauldrons" last summer would even-out the rebel front line and remove the initiative from the Ukrainian side once and for all, not to mention destroying Kiev's most combat-capable army group.

Another possibility is the capture of Mariupol. Strelkov's page has also strongly hinted at that recently. However, I should mention that misleading, speculative, or seemingly contradictory information on Strelkov's page has been used to spread fear and uncertainty on the Ukrainian side, helping keep them off-balance in advance of major rebel moves.

So, this is just speculation, but I am pretty sure there will be one more major rebel advance (and major Ukrainian defeat) before winter starts in earnest. The rebels simply cannot afford to have their largest cities still within range of Kiev's heavy artillery when the temperatures are consistently below freezing. They can't continue to have their people being made homeless all through the long Russian winter. If for no other reason, they will have to strike hard to push the Ukrainians further back.

How long it takes for the West to recognize that that fact, and how many get killed in the process remains to be seen. Right now, there is no sign either side will back down.

Hypocrites in Washington DC and other misguided souls insist such a result "cannot be allowed to stand" even though the US has no legitimate business in the region.

More importantly, and even if you think the US does have a vested interest in the region, those in Eastern and Southern Ukraine are culturally and politically more aligned with Russia than Kiev. 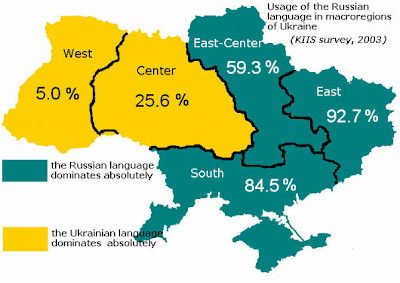 Map from Online Russian Do Ukrainians Speak Russian or Ukrainian?


Iraq is another perfect example of the failure that happens when outsiders set borders without taking cultural differences into consideration.

Ukraine and the US don't like the vote. OK, how about another one?

I propose a vote in which the citizens in Ukraine's region get to pick the questions as opposed to Kiev forcing the questions down the throats of those in the region.

Think the vote would be much different that the one than just took place?

I don't. That's why Kiev won't allow it.

By the way, I will be inaccurately accused (yet again) of taking a pro-Putin stance. The fact of the matter is that I am taking a pro-democracy stance.

I really don't care what the questions are, or how Ukrainians in those regions vote.

This is internal business of Russia and Ukraine, especially those who live in sections of Ukraine that arguably should never have been part of Ukraine in the first place!

Why should anyone else care what the voters choose? Shouldn't people in the region get to decide their own fate?