Here's the question of the day: Does GDP stand for Gross Domestic Product or Grossly Distorted Procedures?

One of the reasons I ask is the latest push by countries to include prostitution and drugs sales in GDP calculations.

CARTOONS |  Close to Home
View Cartoon
From the preceding link, the WSJ reports ...

The U.K. could add as much as $9 billion to the value of its GDP by including prostitution and about $7.4 billion by adding illegal drugs, by one estimate, enough to boost the size of its economy by 0.7%. Not to be outdone, Italy will include smuggling as well as drugs and prostitution.

Other nations in Europe are also poised to fall in line with a European Union call to standardize and broaden GDPs. The EU is following a "best practices" directive laid out in 2008 by the United Nations.

The "best practices" push is on to count sex, except in France (where perhaps it would send GDP soaring to unbelievable heights).

Yet, no one counts people raising their own vegetables, a genuine product.

As long as we are counting prostitution, why not count consensual sex? What about sex between husbands and wives? What about teen sex?

Isn't the product the same? Are we counting products and services or not?

If husbands did not get sex from their wives, wouldn't some of them pay to get sex elsewhere?

Is or isn't sex a service?

OK, but that leads to a discussion on imputations.

Q: What are GDP imputations?
A: They are an assumed value of goods and services that trade at no price.

The biggest example of imputed GDP is the alleged value derived from living in your own home.

The government figures that if you did not own your own home, you would pay someone rent. It adds the presumed amount of rent you would pay to rent your home from yourself to GDP.

Another US GDP imputation is the "value" of "free" checking accounts. Government assumes that since you do not pay for your free checking account GDP is underestimated by the value of the "free" account.

Never mind that banks take your checking account deposit, lend it out overnight, earn interest on it, and your money really isn't there at all.

Government imputes a value on the practice.

Inquiring minds may be wondering how much imputations add to US GDP. The following figures are from 2013. They calculate these things in arrears to allow for any needed GDP smoothing.

Here are a few specifics. 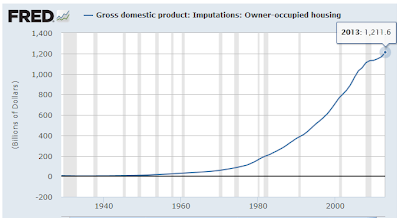 The imputed valued of people renting houses from themselves is $1.21 trillion. 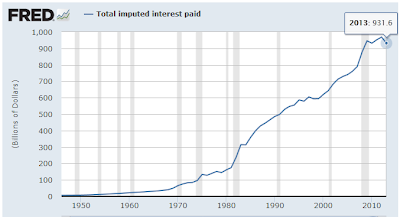 If I loan you $100 and you pay me back a month later and I don't report it, that's a no-no. Perhaps the government also factors in credit card purchases paid off each month on which no interest is paid.

However, it's calculated, the total in this category is $932 billion.

The Fed provides numerous Imputation Charts including imputed interest paid to the rest of the world, imputed health and life insurance, and imputed personal savings.

As long as we are imputing the above, why not impute the value of free sex, mowing your own lawn, and scratching someone's back?

Seriously, if I scratch your back and you scratch mine, why doesn't that add to GDP just as prostitution, free checking accounts, and paid massages add to GDP?

Think how much we can raise GDP calculations if we just get each other to scratch each other's backs 15 minutes a day! Add in some extra sex and drugs and the economy will be booming in short order.