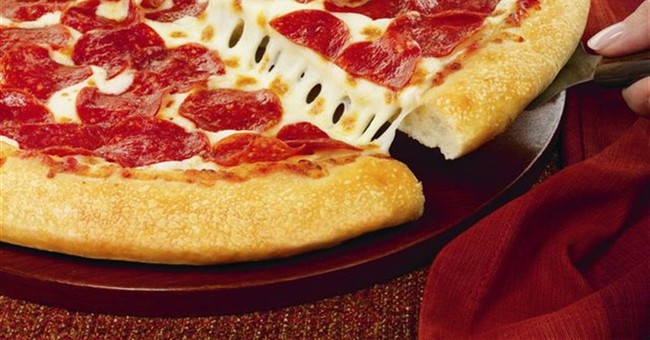 The U.S. Court of Appeals for the D.C. Circuit invalidated a major provision of Obamacare, ruling 2-1 that participants in health exchanges run by the federal government in 34 states are not eligible for tax subsidies.

No doubt, cheers went out from the anti-Obamacare crowd.

However, just a few hours later, the Richmond Appeals Court ruled 3-0 the opposite way, citing pizza in its explanation.

Two federal appeals court panels issued conflicting rulings Tuesday on whether the government could subsidize health insurance premiums for people in three dozen states that use the federal insurance exchange. The decisions are the latest in a series of legal challenges to central components of President Obama’s health care law.

The United States Court of Appeals for the Fourth Circuit, in Richmond, upheld the subsidies, saying that a rule issued by the Internal Revenue Service was “a permissible exercise of the agency’s discretion.”

The ruling came within hours of a 2-to-1 ruling by a panel of the United States Court of Appeals for the District of Columbia Circuit, which said that the government could not subsidize insurance for people in states that use the federal exchange.

That decision could potentially cut off financial assistance for more than 4.5 million people who were found eligible for subsidized insurance in the federal exchange, or marketplace.

Under the Affordable Care Act, the appeals court here said, subsidies are available only to people who obtained insurance through exchanges established by states.

The law “does not authorize the Internal Revenue Service to provide tax credits for insurance purchased on federal exchanges,” said the ruling, by a three-judge panel in Washington. The law, it said, “plainly makes subsidies available only on exchanges established by states.”

Under this ruling, many people could see their share of premiums increase sharply, making insurance unaffordable for them.

The case is one of many legal challenges to the Affordable Care Act in the last few years. The Supreme Court upheld the law in 2012, but said the expansion of Medicaid was an option for states, not a requirement, and about half the states have declined to expand eligibility.

How Much Would Premiums Rise?

A Study from Avalere Health shows that the average health-care premium increase for those who actually lose their subsidies would be 76%. The hike in premiums would be highest in Mississippi, where it would be roughly 94%, as well as Missouri, Georgia, Florida and Alaska.

The map shows just how much the increases are likely to be, and the decision could exempt many of the roughly 4.7 million people who received subsidies and enrolled via federal exchanges. Those who enrolled in states with their own exchanges are not subject to the ruling.

Thirty-six states currently use the federal exchange, but two of those — Idaho and New Mexico — are setting up their own marketplace. That means 16 states plus the District of Columbia will be operating their own exchanges in future years. 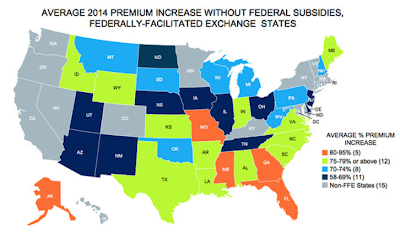 Yahoo!Finance reports A Federal Judge Used Pizza To Explain Why A Key Provision Of Obamacare Is Legal.

Just hours after the Affordable Care Act was dealt a serious blow from a federal appeals court, a different appeals court gave the law a victory — thanks in part to an analogy based on pizza.

That is this case: Congress specified that Exchanges should be established and run by the states, but the contingency provision permits federal officials to act in place of the state when it fails to establish an Exchange. The premium tax credit calculation subprovision later specifies certain conditions regarding state-run Exchanges, but that does not mean that a literal reading of that provision somehow precludes its applicability to substitute federally-run Exchanges or erases the contingency provision out of the statute.

The issue is one of intent. Right, wrong, or indifferent, it's highly the Supreme Court will rule on the intent of Congress, not actual wording of ACA, nor whether the alleged intention makes much or any sense.

I suspect Obama will get a reprieve, but it is by no means certain. The outcome may depend on how other courts rule before the Supreme Court accepts the case.