Balancing the Budget and the Trade Deficit is Easy: Return to Gold Standard

The Daily Ticker's Lauren Lyster conducted an interesting interview today with British Member of Parliament Kwasi Kwarteng on gold and balancing the budget.

To play the video, click on the preceding link.

Kwarteng is author of War and Gold, a Five-Hundred-Year History of Empires, Adventures, and Debt. 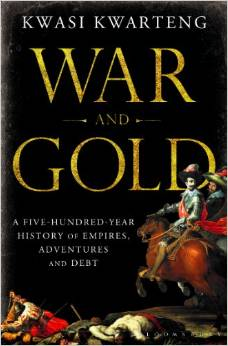 "The credit crunch, the credit bubble that preceded it, and the huge amounts of debt and deficits that we have are related to paper money," says Kwarteng.

Lauren asked "After the Fed has printed trillions of dollars, just to look at the past several years of expanding the money supply, how do you put the genie back in the bottle?"

"If the Chinese unilaterally declared that the renminbi would be pegged to gold it would essentially recreate the gold standard," responds Kwarteng.

Yet, Kwarteng admits that China's export policy likely precludes that from happening.

Missing the Boat on Trade

My one disagreement in an otherwise excellent discussion is that Kwarteng misses the boat on trade in a major way. He maintains that the UK cannot go back to the gold standard because of trade deficits. His take is governments need to balance budgets and increase exports first.

He has that point backwards. Trade deficits will not fix themselves. Competitive, beggar-thy-neighbor tactics would prevent that. And if the UK and US balanced their budgets, the pound and dollar would soar, and exports would drop.

In contrast, a return to the gold standard will not only fix deficit spending, but it will cure trade deficits in a flash.

That's what I mean by "easy". Certainly, the current political environment and the ensuing short-term pain would be anything but "easy".

Whitmer: Travel to Florida for me, bupkis for thee?
Hotair
Tucker Carlson Responds to the Brian Sicknick Revelations With Fiery Interview
Redstate