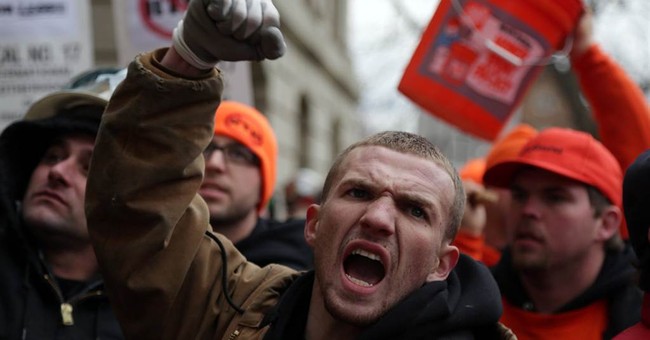 A "goon-squad" group named The Helpful Union Guys (THUG), members of Ironworkers Local 401 set fires, started riots, and took crowbars to the competition in an effort to protect union jobs.

THUGs stalked women, took baseball bats to a Toys R Us site, and even torched a Quaker meetinghouse that dared to use non-union labor.

They called themselves "the Helpful Union Guys" - "THUGS" for short - and woe awaited any contractor who dared cross them by hiring non-organized workers.

For, federal authorities alleged Tuesday, this "goon squad" of members of Ironworkers Local 401 set fires, started riots, and took crowbars to the competition in an effort to protect union jobs.

FBI agents arrested 10 of the union's leaders Tuesday morning, including longtime head Joseph Dougherty, in a racketeering conspiracy case that appeared to affirm long-standing business complaints over the tactics employed by Philadelphia unions.

Prosecutors alleged that Dougherty and others have cost contractors hundreds of thousands of dollars over at least three years, and were indiscriminate in choosing their targets - equally willing to break skulls with baseball bats at a Toys R Us work site in King of Prussia or torch a Quaker meetinghouse under construction in Chestnut Hill.

According to the 49-page indictment, Dougherty, 72, coordinated the campaign of sabotage and extortion, urging members to picket, threaten, and destroy the property of contractors who ignored threats against hiring nonunion employees.

At the meetinghouse work site, prosecutors said, three union members cut steel beams and set fire to a crane in December 2012, setting the project back weeks and costing the contracting firm, E. Allen Reeves Inc. of Abington, more than $500,000.

Several state representatives who received money from THUGs donated it to charity.

Proving he is willing to be bought and owned by unions, State Rep. Brendan Boyle, a Democrat running for Congress in Pennsylvania's 13th District - defended the ironworkers' contribution of $10,000 to his campaign last year.

There is something gravely wrong in our nation when government sanctions the intimidation and bullying of one group of people by another. But that's exactly what is happening in Pennsylvania.

Sarina Rose, an executive vice president for development for Post Brothers Apartments, was stalked and harassed by union organizers. Protesters persistently followed her throughout her private life, even taking photos of her children, ages 8 and 11, at their bus stop in Abington. The situation dramatically escalated when "one union leader loudly cursed at her in front of a packed restaurant and mimicked shooting her," according to an Inquirer report last month.

What had Rose done wrong? Nothing, but she was part of a company that elected to hire a mix of union as well as nonunion labor to complete a construction job.

Unfortunately, the authorities could do nothing. In Pennsylvania, union workers are allowed to act with impunity against citizens, and it has been approved by both the legislative and judicial branches of government.

As The Inquirer reported: "Thanks to a little-known provision protecting parties in labor disputes from prosecution for stalking, harassment, and terroristic threats, Rose said, she was left powerless to stop the nearly constant baiting. The men who dogged her at all hours walked free."

In August, some members of the Pennsylvania General Assembly introduced legislation to remove the exemptions permitting certain types of harassment in labor disputes. Unfortunately, the bill has not progressed since receiving committee approval in October, in large part because the state Fraternal Order of Police came out aggressively against it.

Fortunately, we do not live in a country where veiled threats of murder, like those directed at Rose, can be made without someone standing up for the rule of law. We live in a country that requires equal protection for everyone. Pennsylvania law, however, denies such protections to victims of union thuggery under the false pretext of protecting free speech.

In March 2013, I addressed this issue in the Pittsburgh Tribune-Review: "This special 'carve-out' grants union organizers the ability to disrupt the business of ... local employer[s], trespass on their property, and violate their personal property rights. In essence, it gives unions license to 'obsessively pursue' individuals 'to the point of harassment.'"

Pennsylvania's elected officials should immediately pass legislation removing any exemptions to stalking and intimidation laws. Protecting the state's citizens is an obligation, not a choice.

As I have mentioned on numerous occasions, unions get their power via threats, intimidation, coercion, bribery, and cash contributions to corrupt politicians.

There is no excuse for such actions from unions.

Yet, threats and even stalking of women by union thugs it is not only tolerated but protected by state statute.

As one might expect from corrupt politicians on the take, rather than change the law, legislators backed off after the biggest goon-squad of all, the Fraternal Order of Police, fought the measure.