The takeover of Crimea by Russia is nearly complete. All that remains is the final vote on March 16. There would not be a vote if the outcome was uncertain.

Pro-Russian forces advanced in Ukraine’s Crimean peninsula, ignoring Western calls to halt a military takeover before the region’s separatist referendum. The U.S. estimates Russia now has 20,000 troops confronting a smaller Ukrainian force there. Ukraine has stepped up its eastern border defenses in the worst standoff between it and the West since the Cold War.

Authorities on the peninsula ordered an anti-aircraft regiment in the city of Yevpatoriya to lay down its arms or its base would be taken over, news service Interfax reported.

The peninsula, where Russian speakers comprise a majority, will join Russia once parliament in Moscow passes the necessary legislation and there’s nothing the West can do, according to Sergei Tsekov, the deputy speaker of Crimea’s parliament.

“There’s no comeback, and the U.S. or Europe can’t impede us,” Tsekov said by phone on March 7 from Moscow, where he met Russian officials to discuss the region’s future. “Crimea won’t be part of Ukraine anymore. There are no more options.”

The U.S. and European allies will impose sanctions if there isn’t a quick resolution, Obama said at the White House on March 6.

Ukraine will pay about $368.50 per 1,000 cubic meters of the fuel in the second quarter, Prodan said. Russia agreed last year to cut the price it charges Ukraine to $268.50. Gazprom rescinded the discount last week and said Ukraine risks a repeat of 2009, when the Moscow-based company reduced shipments during a pricing dispute.

It is likely the US issues some sanctions. They probably will not be meaningful. as noted on March 5, Russia Has Upper Hand in Ukraine, No Meaningful Sanctions Coming.

It was easy enough to impose sanctions on Iran because there was no meaningful trade with Iran other than oil. And global oil supply can come from anywhere.

Finally, Germany gets 30% of its natural gas supply from Russia. Impose severe sanctions and Russia can shut down those supply lines, most of which happen to run through Ukraine.

Obama can pretend to put down a tough stance, but don't expect any meaningful reaction globally. Events are already firming up along those lines.

Germany and the UK already rejected major sanctions. Europe gets much of its natural gas from Russia and hoarding supplies is now underway.

See Natural Gas Hoarding in Europe Thanks to US Sanction Proposals; Boehner vs. McCain; LNG the Solution. 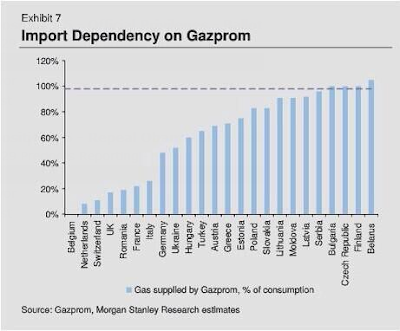 The chart is from Gazprom and Morgan Stanley.

It is mathematically impossible to be more than 100% dependent on a supplier, at least over the long-term. Certainly, for short periods of time imports can exceed usage, but over the long haul they cannot.

That said, I do not know the timeframe for the chart. It's possible the chart is reflective of recent hoarding.

Regardless, the chart shows the huge dependencies some European countries have for Russian natural gas.

I feel sorry for those who will soon be living in a nation they do not feel part of. But there is little that can be done about it.