Telegraph writer Ambrose Evans-Pritchard is back at it. In arguably his worst article ever, Pritchard complains France is Looking Straight Down the Barrel of a Deflation Shock.

Pritchard bemoans the horrors of falling prices and says "There is a technical solution to this. It is called QE. The European Central Bank can lift the entire EMU system off the reefs by launching a monetary blitz to meet its own M3 growth target of 4.5pc."

Pritchard complains "French President François Hollande must now pay the price for kowtowing to the contraction polices of the eurozone."

Pritchard knows full well France is bound by eurozone policies. The only way France cannot "kowtow to the contraction polices of the eurozone" is if France leaves the eurozone. But Pritchard never mentions that. Instead he whines about falling prices.

Pritchard clings to the centrally bad idea that falling consumer prices will cause consumers to perpetually delay purchases.

Those are relatively inelastic demands.

But there is also no evidence consumers will hold off for long on discretionary spending either. Every Christmas, shoppers line up for bargains. People continue to upgrade TVs, computers, monitors as they wear out, or simply because prices are lower and quality is up since they last bought.

Pritchard's solution is the same as that of many charlatans before him: Force prices up.

The Fed succeeded. As a result, people now bitch and moan about "living wages". Of course "living wages" are a moving target. Force prices higher and the more it takes to keep up with them.

People want $15 an hour for standing behind a cash register and handing you a sack of the worst food money can buy. It's ridiculous.

Hardly anyone ever points out the fact that wages have not kept up with inflation precisely because the Fed has done exactly what Pritchard wants.

People do not blame the Fed, nor do they blame economic illiterates like Pritchard. Instead they blame allegedly evil corporations like McDonalds and Walmart.

Actually, the world needs more Walmarts. I hope Walmart enters the health-care business in a big way. Costs would come down overnight. It would also be great if Walmart could directly compete with banks on financial services.

The problem is not that wages are too low, but rather costs rise faster than wages. Why does that happen? Because of the very central bank polices espoused by Monetarists like Pritchard.

Pritchard and others will note that falling home prices will slow bank lending and consumer credit. That is correct. OK, but what's the real problem?

The real problem is monetary inflation artificially jacked up the prices of assets (homes, cars, equities) upon which unsustainable loans were made. Rather than admitting that simple and obvious fact, Monetarists propose the solution is still more monetary printing which will do nothing but create even bigger asset bubbles.

Because of one idiotic notion, that "falling prices are a bad thing", the Fed has generally managed to keep the CPI rising, with some things going up much faster than others.

People propose bad idea after bad idea simply to fix problems caused by the previous bad idea. This is corollary six to the Law of Bad Ideas.

Pritchard, like many before him and countless others yet to come, want higher inflation rates. Here is a table I put together that shows the silliness of it all.

Effect of Inflation Over Time


None of these inflation charlatans discuss what happens if wages do not keep up. Nor do they discuss the incentives businesses have to outsource jobs or automate because of high wages.


Amazingly, many people in academic wonderland are not satisfied with 2% annual inflation. They want 4% inflation or higher. For example, Laurence Ball at John Hopkins University claims to make a Case for Four Percent Inflation.

Ball is "grateful for suggestions from Olivier Blanchard, Daniel Leigh, Gregory Mankiw, and Richard Miller. This paper is prepared for the Central Bank Review, published by the Central Bank of the Republic of Turkey."

How is the Turkish Lira doing since that paper came out? Let's take a look. 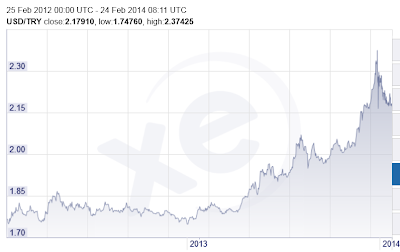 Hmm. Once inflation steps in it seems difficult to turn it off.

Ball cited Gregory Mankiw, an economic professor at Harvard, who had an even more inane idea of drawing a number out of the hat every year and making currency ending in that digit worthless.

Mankiw claims expiring currency would be a benefit. I responded Time For Mankiw To Resign

These charlatans sit in their academic ivory towers void of common sense and real world economics.

Of course economically asinine proposals from those in academic wonderland is expected behavior by corollary number four.

For the sake of completeness, here is a complete recap.

Law of Bad Ideas: Bad ideas don't go away until they have been tried and failed multiple times, and generally not even then.

Corollary One: Left alone, bad ideas get worse over time.

Corollary Three: Those in positions of political power not only have the worst ideas, they also have the means to see those ideas are implemented.

Corollary Four: The worse the idea, the more likely it is to be embraced by academia and political opportunists.

Corollary Five: No politically acceptable idea is so bad it cannot be made worse.

Although there is strong evidence that consumers will hold off making asset purchases (homes, stocks, bonds), when asset prices fall, there is not a shred of evidence of a meaningful reduction in consumer purchases due to falling consumer prices.

The irony is that QE tends to foster asset bubbles that ultimately crash, not a price rise in general goods.

Central banks in general, and the Fed in particular, are excellent examples of those in power, hell bent on implementing various bad ideas.

In yet another irony in this madness, monetarist polices benefit those with first access to money, namely the banks and the already wealthy. Yet the same academics screaming for higher inflation are typically the same ones screaming about income inequality.

The amount of damage caused by one central thesis "falling prices are a bad thing" is staggering. And to fix problems inherent in that central thesis, countless other bad ideas are sure to follow.