US Household Debt Climbs by Most Since 2007

Given stagnant wages and higher taxes, the only way households can increase spending is to go further into debt.

The New York Fed quarterly report on Household Debt and Credit shows that is what happened.

Mortgages, the largest component of household debt, increased 1.9% during the fourth quarter of 2013. Mortgage balances shown on consumer credit reports stand at $8.05 trillion, up by $152 billion from their level in the third quarter. Furthermore, calendar year 2013 saw a net increase of $16 billion in mortgage balances, ending the four year streak of year over year declines. Balances on home equity lines of credit (HELOC) dropped by $6 billion (1.1%) and now stand at $529 billion. Non-housing debt balances increased by 3.3 %, with gains of $ 18 billion in auto loan balances, $53 billion in student loan balances, and $11 billion in credit card balances.

Delinquency rates improved for most loan types in 2013 Q4. As of December 31, 7.1% of outstanding debt was in some stage of delinquency, compared with 7.4% in 2013 Q3. About $820 billion of debt is delinquent, with $580 billion seriously delinquent (at least 90 days late or “severely derogatory”). 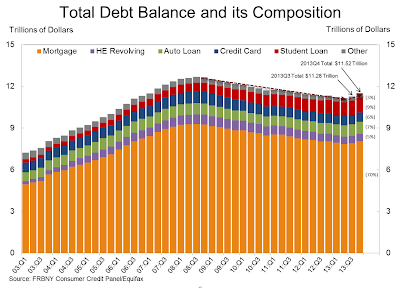 
Clearly fourth quarter of 2013 was a big quarter for housing, but can it last?

Auto loans had an average quarter, likely downhill from here. Trends in student debt are ominous. 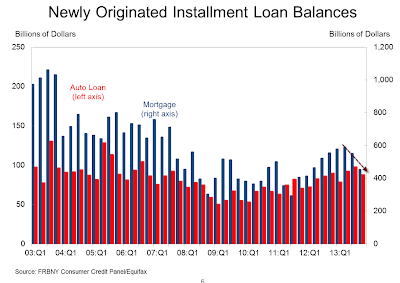 Growth in auto loans and home installment loans appears to have peaked. 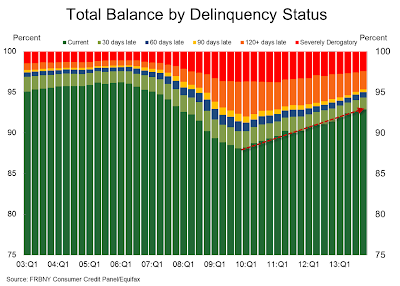 Percent of Delinquencies by Type 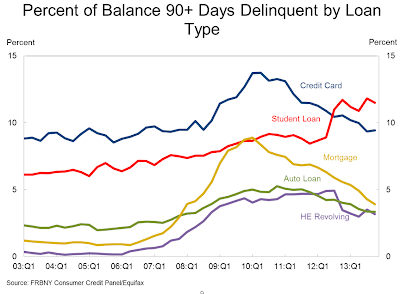 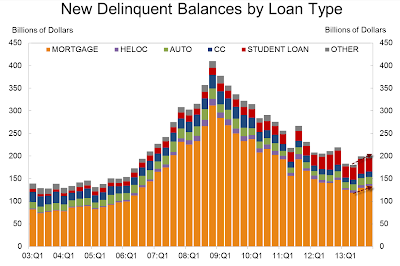 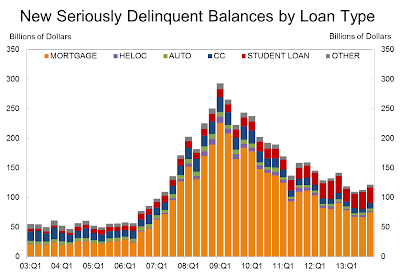 There are 31 pages and many other charts in the report. Inquiring minds may wish to take a look.

Some big cracks beginning to appear? Sure looks like it.

Unless job growth and wage growth pick up, especially wage growth for the bottom half, these trends may be as good as they get given the noticeable cracks and ominous trends in student loan debt.