Gallup Poll: #1 U.S. Problem is Government, the Economy is #2

Compared with a year ago, mentions of government are up slightly. Mentions of healthcare, on the other hand, have quadrupled -- from 4% in January 2013 to 16% today, likely related to highly visible problems with the rollout of the 2010 healthcare law. At the same time, references to the federal deficit or debt have declined from 20% to 8%, while mentions of the economy in general have dipped from 21% to 18%, and mentions of unemployment/jobs are the same, at 16%. 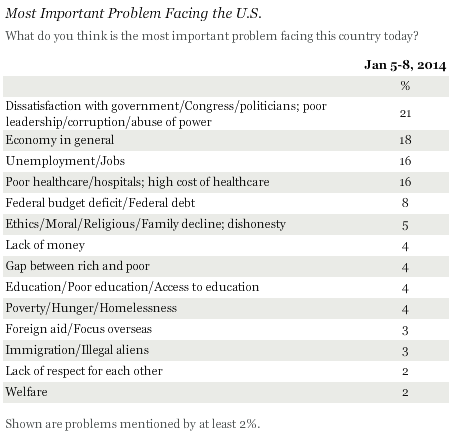 Additional breakdowns in the report.

If one lumped the economy and unemployment together, the percentage would be 34% overall, 31% by Republicans, 37% by Independents, and 34% by Democrats.